Topplers of Statues at Work 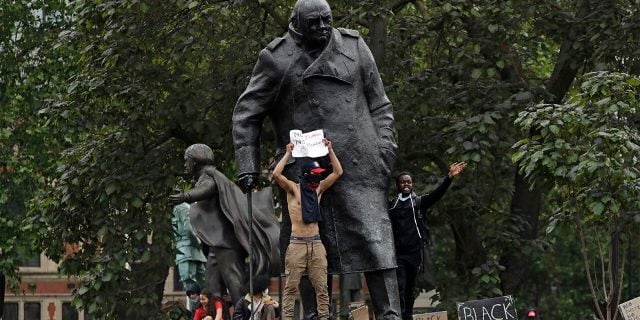 Topplers of the world disunite. You have nothing to lose but your brains.

Among the majestic words spoken by Winston Churchill were in his defiance of Nazi Germany, “we shall never surrender.” It is saddening that as a result of extremists in the Black Lives Matter protests in Britain, the statue of the iconic Churchill in London has been covered up to prevent damage, as are the memorials of the Cenotaph and Nelson Mandela. Statues and memorials have become a reminder of the troubled past, and the dilemma is whether they should be removed if associations about them clash with modern views and sensibilities, and current politics.

On April 5, 2020 Prime Minster Boris Johnson, who had tested positive for Covid-19 and whose life appeared to be in danger, was admitted to a hospital in central London where he recovered after being in intensive care. A week later, paying tribute to the NHS staff to whom “I owe my life,” he left the hospital, St Thomas’ Hospital, part of the Guy’s and St Thomas’ NHS Foundation Trust. The two medical facilities have been linked since 1721 when Sir Thomas Guy, a governor of St Thomas founded Guy’s Hospital to treat people discharged from St Thomas.

In his will, Thomas Guy spoke of the purpose of his endowment, a new hospital that “will receive and entertain lunatics, alleged or called aforesaid incurable people.” It is improper to argue that criticism of Guy or Guy’s comes from lunatics or incurables. Nevertheless, PM Johnson must be surprised that the NHS Trust is now considering petitions calling for the removal of the statue of Guy from the grounds of the hospital he founded. The Trust has explained that it understood the anger felt by the black community and said it was committed to help end racism, discrimination and inequality, but had not decided on whether to remove the statue.

The problem of the statue arises from the fact that Guy was a bookseller and then a major shareholder in a company that sent slaves to the Spanish colonies, the South Sea Company which served the Royal African Company.

Mayor of London Sadiq Khan, Muslim of Pakistani origin, who is reviewing statues, plaques, and street names in London, has argued for a city reflecting the “values we have and the diversity of our city.” He has set up a new Commission for Diversity that will focus on increasing representation among Black, Asian, minority ethnic communities, women, LGBT, and disabled groups. He has proposed a national slavery memorial and a national Sikh war memorial be created in London, and a commemoration of “great black Britons.”

Britain of course has had a different history than the U.S. of blacks and of slavery. The Somersett case in 1772 held that no person in Britain could be forcibly removed from Britain and sold into slavery. In the UK, the slave trade was ended in the British Empire and slavery was abolished by statute in 1833, freeing more than 800,000 slaves. William Wilberforce, the leader of the anti-slavery movement, had introduced the first parliamentary bill in 1791 and did not stop until the country had “extinguished every trace of this bloody traffic…that has been so long a disgrace and dishonor to this country.” Similarly, Charles Dickens in a letter to John Forster March 21, 1842, criticizing slavery in the U.S., expressed his happiness on “turning our backs on this accursed and detested system.” Dickens also spoke of the “moral duty of emancipation.” After abolition, the Royal Navy patrolled the coast of West Africa to suppress the Atlantic slave trade.

However, Britain was a colonial power, at its peak the largest empire in history, starting with overseas possessions and trading posts, and embracing over a quarter of the world’s population and more than a quarter of the world’s land surface. Ever British colony had some enslaved people. British merchants from the 16th and 18th centuries were involved in and played a large part of the Atlantic slave trade, including “triangular trade” between Britain, West Africa, and the American colonies. British ships were involved in the transport of an estimated eleven million Africans in the slave trade, of whom 1.4 million died during the voyage.

Britain is now following the experience of the U.S. in removing or calling for removal of statues or monuments of individuals associated with slavery, or racial discrimination, or those regarded as imperialists or colonialists. No doubt the UK in the past pulled down statues and palaces of other civilizations. The question now arises whether history is being erased or truly evaluated. A document published on June 9, 2020 titled “Topple the Racist” includes a list of more than 100 statues and street names that should be taken down or changed. The topplers are ecumenical and afford a review of British history, economics, and geography. We are reminded of the suspects, James II, Charles II, Lord Mountbatten, Robert Clive, Francis Drake, Lord Kitchener, Oliver Cromwell, Lord Clyde (Colin Campbell) , Henry Dundas (Lord Melville), Francis Galton, General Redvers Buller, Sir Thomas Picton, General James Neill, among others.

A few of the list can be examined. The offensive against Cecil Rhodes at Oriel College Oxford, has been continuing for some time and has been reinvigorated after the Black Lives Matter campaign in the U.S. with a Rhodes Must Fall demand. Rhodes was a British businessman, a mining magnate who founded De Beers, which controlled most of the world’s diamond mines which employed slave labor in Southern Africa. He was a colonialist who became prime minister of Cape Colony, now South Africa, whose policies were a forerunner of apartheid. But he was also a philanthropist who left money in his will to Oriel College. Most notably, the money has been used as a grant for a foundation for foreign scholars to come to Oxford. Though critics have argued the grant was based on the oppression of southern African people, Nelson Mandela said that though Rhodes’ legacy was controversial, he should still be remembered for his philanthropy.

So far, Oriel has decided to keep the statue.

Action has taken place on some of those to be toppled. Among them are the statues of  Robert Milligan, and Edward Colston.

Milligan was a Scottish merchant and slave owner who had two sugar plantations and 526 slaves in Jamaica. He tried to get a monopoly on the import into London of West Indian produce, He founded the West Indian Dock Company. His statue in East London was removed after “recognizing the wishes of the community” on June 9, 2020.

Colston was a merchant from Bristol who became involved in the slave trade in 1680 by his association with the Royal African Company of which he became deputy governor and which had a monopoly on English trade  in African slaves. He helped organized transport of an estimated 84,000 Africans, of whom 19,000 died during passage. Bristol was once the most important British port for slave ships. Colston made his fortune in buying and selling slaves. However, he left most of his money to charities, and was the greatest benefactor of the city of Bristol. His name is on many of the streets and buildings in Bristol, on schools, hospitals, and churches. His statue in Bristol was torn down and thrown into the waterfront.

The calls for toppling have occasioned some surprises and mistakes. One concerned prime minister Sir Robert Peel, who was the son of  a wealthy cotton manufacturer, also named Robert Peel. The topplers claim Sir Robert petitioned against the bill in 1806 to abolish the slave trade, but they are mistaken. It was his father who did so. Sir Robert’s statue is likely to remain, even if the family fortune came from the work of slaves.

A second case concerns American born Eliyu Yale who was president of the East Indian Company settlement in Madras. He later became a diamond merchant and a judge who is said to have sentenced “black criminals” to flogging and enslavement. He was also a philanthropist. In 1718 a school in Connecticut was renamed Yale in his honor. In Britain, as a result of protests in 2017 a pub sign with his name was changed to show Yale together with a slave in chains.

Christopher Columbus has suffered a sad fate, He was decapitated on June 10. 2020 in Boston. However, his statue in Belgrave Square in central London was attacked but still stands.

Most surprising has been the defacing of the statue of Winston Churchill in Parliament Square in London. Prime Minister Boris Johnson has put the case fairly. Though Winston sometimes expressed opinions that were and are unacceptable, he was a hero, and fully deserves his memorial. His statue is a permanent reminder of his achievement in saving the UK  and the whole of Europe from a fascist and racist tyranny. It is a disgrace that the statue has to be protected and is boarded up.

Ant then there is William Gladstone, prime minister on four different occasions whose family had slaves in plantations  in the Caribbean, and who received a settlement of  90,000 pounds (9.5 million in today’s money) as compensation for freed slaves. Gladstone is to be toppled because in his maiden speech in the House of Commons he had voted against a petition against slavery.

And there is Nelson, Admiral Horatio Nelson, so called white supremacist, in a bust on top of column in Trafalgar Square. How many of the topplers know that in the bas relief of his statue there is a figure of a black sailor carrying a gun to protect Nelson?

Reading the To Be Toppled list leaves one in a condition of moral bewilderment, how to assess figures of the past who have been honored. Is history to be made by the winners or current protestors? The need is compelling for legitimate historical analysis to clarify the true history of personalities who have been admired.