Spurs supporters, who have traditional ties with north London’s Jewish community, angered by footage of fan forced to take down Israeli flag,  Tottenham Hotspur have confirmed that their supporters are still banned from displaying the Israeli flag despite footballers, including Paul Pogba, waving Palestinian colours on the pitch.

The club explained on Friday that a steward had been acting within their rules by forcing a supporter to remove his flag during the match again Aston Villa on Wednesday. Club guidelines state that “national flags during times of political conflicts, campaigns or issues” are deemed inappropriate.

Supporters at the club, which has traditional ties with north London’s Jewish community, were angered by footage of a fan being forced to take down his Israeli flag while in the stands against Aston Villa on Wednesday. The video was widely shared on social media.

In contrast, Pogba and Manchester United team-mate Amad Diallo are facing no action from the Football Association for holding up a Palestinian flag after United’s draw with Fulham 24 hours earlier. 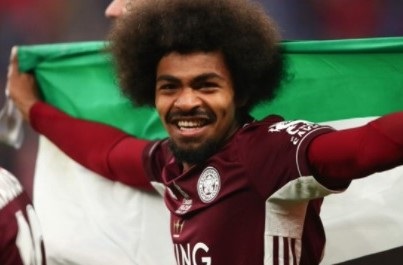 The same thing happened at the Cup Final on Saturday. I enjoyed Leicester’s win but not the spectacle of Hamza Choudary prancing around the pitch during the celebrations brandishing a Palestinian flag, which his colleague Wesley Fofana helped display. It did however gladden the heart of The Palestinian ambassador to the UK who wrote a letter of thanks. He said, as reported by The Leicester Mercury

“Allow me, on behalf of the Palestinian government and people, to extend our profoundest gratitude that, in your moment of FA Cup triumph, Hamza Choudhury and Wesley Fofana, used the historic occasion to show solidarity with the plight of the Palestinian people. Carrying the Palestinian flag on the stage of one of football’s most august cup competitions is a show of support that is reverberating all over Palestine. . . .

“Congratulations on your cup win. And together, one day, we hope Leicester Football Club will play in Jerusalem, the capital of the free state of Palestine.”

The letter was shared by Claudia Webbe, Labour MP for Leicester East, who added: “Wow! this from the Palestinian Ambassador on behalf of the Palestinian government and people thanking Hamza Choudhury and Wesley Fofana of Leicester City Football Club for using the historic FA Cup triumph to show solidarity.”

Sport’s rules on Palestinian flags have already been branded “an absolute mess” by Piara Powar, the executive director of the FARE network, which helps Uefa police politically-inflammatory conduct during matches. 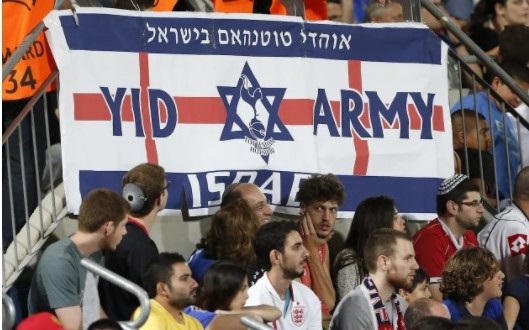 Tottenham fans have sported the Israeli flag, even if not personally Jewish, for a very long time.
Since 1948 probably.  And they call themselves the ‘Yid Army’ since my childhood (the Double of 1961) or longer as they were a Jewish club from very early in the 20th century.  Because it can be an insult, when used insultingly, some people think the term should be dropped; others disagree and continue to describe themselves as such.But that’s another arguement. This is such a flag, carried by Spurs supporters from (I believe) an England v Italy U21 match at Wembley. But I don’t know the date.

PrevThe Whole Truth About the Israeli Strike on the Building Housing the AP and Al Jazeera Offices in Gaza
In News and Film, the Anti-Israel Bias PervadesNext