The president is already unlimbering the economic guns and starting to spike the dreams of those who hope that the economic consequences of the anti-coronavirus measures will lose the administration its reelection. 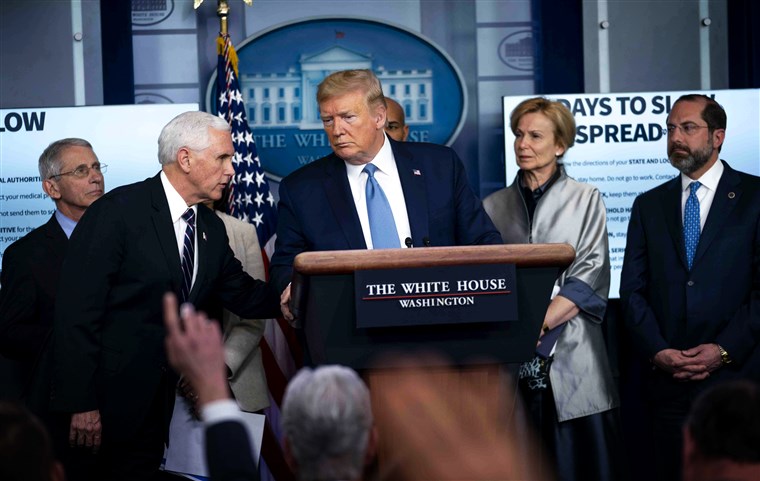 The political aspect of the coronavirus crisis is developing in a familiar way. The president’s enemies in the media have led the propagation of panic in the country, and have been given enough encouragement to do that from the scientific community, some of whose members are enjoying their 15 minutes of world fame a little more than is seemly.

Trump’s opponents are thus able to swaddle themselves in the legitimacy of science as they hurl their brickbats at the president. As is his custom, the president has given his opponents plenty of ammunition by speaking constantly, leaving a rich trove of contradictory, and in some cases, it turns out after a few days, absurd reflections on the medical and related problems as they unfold.

As is also the well-established custom, his enemies cannot resist embellishing and fabricating. The claim he had disbanded the pandemic response section of the National Security Council is false, as are suggestions that he has ignored or overruled scientific opinion.

The assault on the president’s credibility as an enunciator of facts has had some success, partly because there is some reason to question his attention to facts and partly because he is routinely smeared by his media enemies.

Meantime, the dishonesty of the media is reaffirmed almost daily. The president has made an effort to avoid partisanship and has worked well with Democratic governors, even those with whom he enjoys a relationship of intense reciprocal dislike, including Andrew Cuomo of New York, Gavin Newsom of California, and Jay Inslee of Washington. He has also made a reasonable effort to conduct daily press briefings with civility; those efforts are not always requited, and some of the journalists routinely withhold the respect due the office.

There is a slightly theatrical quality to these daily press briefings; the president set up the committee including senior scientists, doctors, and public health officials, and put Vice President Mike Pence in charge, but has now taken to handling the press briefings himself. And all the figures in the administration who address the press seem to be pre-programmed to begin every third sentence with “The president has very wisely decided . . . ” or “Because the president so presciently foresaw . . . ” or some such testimony to the indefectible judgment and decisiveness of the president whom they serve.

They may be motivated, in part, by the knowledge that, as an executive and as a television star in his former life, this president has greater ease in dismissing cabinet and other senior officials than any preceding U.S. president, and has no sense of a high official turnover being indecorous. There is doubtless some truth in their compliments, but the effect of such a parody of totalitarian public information methods is the reverse of what is intended. And to some extent, the media are just legitimately covering an immense news story, and not trying to sow panic in order to frighten people unnecessarily, stampede opinion under the president, or disturb what even a month ago looked like a pretty smooth glide-path to reelection.

This is all of a familiar pattern: the antagonistic press, the egocentric president—but also, and this is emerging, the successful and competent president.

Try as he does, unintentionally, to disguise the progress he is achieving by making exaggerated claims and injudicious utterances and then denying he made them and reformulating them, President Trump is clearly all over this problem like a cheap suit. He was right to assemble the committee he did, right to work with all jurisdictions and set partisanship aside, right to enlist the private sector from which he came and whose methods he well knows. And he was right to engage in a program of full and prompt public information.

The results are that where a month ago, coronavirus testing could only be done by appointment in hospitals and the results determined by physically sending tests for evaluation to Atlanta, Georgia—even from Hawaii—simply administered mass testing devices will be manufactured and delivered in great and increasing numbers starting next week, with anyone able to do the test, results known in 40 minutes, and all tests free of cost to the individual tested.

Though the effectiveness of a malarial remedy in combating the coronavirus is based on a single experiment in France, it is a known medicine ready to go and is being used starting this week on an enlarged number of people in New York. Trump has ramped this up very quickly with his declaration of a national emergency and utilization of the Defense Production Act. He rightly leaves it to states and cities to determine the extent of closings and restraint of public activity.

The administration is moving well ahead of most of the media in anticipating the economic consequences of such an assault on commerce as is implicit in the draconian remedies the scientific community is espousing. The more ingenious of Trump’s media enemies probably assume, since his enemies have always assumed that his complete self-annihilation was always about to happen at each “turning point,” and “bombshell” caused by the “walls closing in,” that he can be stampeded into such a medically motivated strangulation of the economy and he will surrender the election into the cupped hands of a thoroughly unfeasible Joe Biden. But it is increasingly clear each day that he is not going to run through these 15-day cycles indefinitely.

As testing increases, the numbers improve. Only about 10 percent of people tested have the virus, and of those only 1.2 percent of people have died from it, the lowest percentage of all serious and reliable reporting countries except Germany and Canada. If the cases connected to the unfortunate home for the elderly in Seattle are excluded, the number would be under 1 percent. Obviously, as mass testing goes forward the incidence will decline, and as measures to protect the immune-challenged are implemented and strengthened, the percentage of fatalities among those who do contract the virus will also decline.

The president is already unlimbering the economic guns and starting to spike the dreams of those who hope that the economic consequences of the anti-coronavirus measures will lose Trump the November election.

A package of $6 trillion of direct and indirect assistance and assured liquidity has been proposed. The Democrats, after the customary waffling about Trump’s self-prostration to his fellow billionaires and indifference to the workers of America, will have to get on board.

What Trump and his officials propose is aimed directly at those who need it most. He has made it clear that he will make the jump from the coronavirus being the principal enemy to the enforced sluggishness of the economy being the principal problem, and he expects to return to the voters as the president who vanquished an unprecedented public health challenge (in this he is allied to the media’s magnification of the crisis) and the president who created a miraculous economy and then retrieved it from the jaws of (foreign-originated) disease.

The polls of presidential job approval have softened slightly, but the polls of approval of Trump’s handling of the crisis have flipped in his favor. They will continue to rise and pull general approval with it. The president would do better if he could resist the urge to insert himself always and excessively into every public aspect of government, and he is, in managing his quest for attention, making what our elementary school teachers called “steady progress.”

The credibility of the media declines as they invent pettifogging reasons to harass a president who increasingly is seen as managing a very challenging situation very well. Joe Biden, about to hold alternative press briefings on the coronavirus, is almost the answer to a trivia question now and will only emerge from that status in the unlikely event that Trump mismanages the public health or economic elements of this crisis, as opposed to just somewhat mischoreographing it.