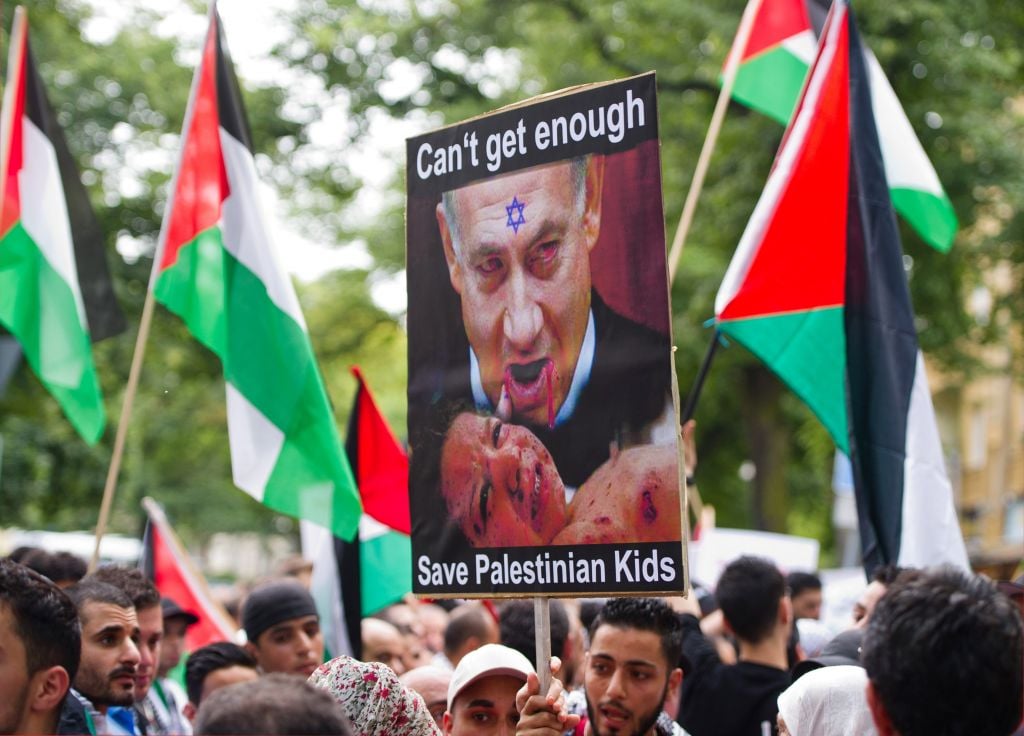 As ugly as it is, President Trump’s decision to move our embassy in Israel from Tel Aviv to Jerusalem has brought the rats out of their hiding places and further made clear the religious anti-Jewish bigotry that lies behind the whole Israeli-Palestinian conflict.

One of my writing activities is to do translating and sub-titling of various events coming out of Europe. Having lived three years in Germany and five in Italy, I am quite interested in the distressing invasion of millions of Muslims into Europe and resulting chaos they have brought with them in the form of terror, crime, welfare costs and refusal to assimilate. They have also rekindled the age-old problem of anti-semitism in Europe.

With the Trump decision, Europe’s Muslims have taken to the streets to howl in rage. All too often, they have shown that for them, no matter what their national origin is, the whole issue is about religion.

In Stockholm, Muslim protesters marched past the Israeli embassy and chanted the old refrain that came right from the mouth of the Prophet Mohammad, “Khaybar, Khaybar O Jew. The armies of Mohammad are returning.” Khaybar was an ancient Jewish town conquered by Mohammad’s army. In addition, Jews were referred to as the descendants of cows, apes and pigs. That, Dear Reader comes from the Koran. As Casey Stengel used to say, “You could look it up”.

In Gothenburg, just days after Trump’s announcement, a group of men threw Molotov cocktails into a synagogue where a party was being held. Fortunately, nobody was injured.

And in Malmo, Sweden’s third-largest city and arguably the most anti-semitic city in Europe, the same anti-Jewish sentiments were heard in reaction to the Trump decision. In the very city which had been a haven for Danish Jews escaping the Nazis, Muslim immigrants called for the deaths of Jews.

Things are not much better in Germany. In Berlin, Muslims took to the streets and recited the aforementioned Khaybar ditty. Meanwhile, in the same country that introduced the yellow star during World War II, Jewish leaders in the town of Bochum advised their community not to wear kippahs in public because it was not safe. Not safe from whom? Germans? Nazis? SS or SA? No, from Muslim immigrants.

And European Islamic expressions of Jew hatred would never be complete without contributions from England. Sure enough, the mobs gathered right in front of our embassy and chanted the Khaybar refrain promising death to Jews.

But that’s Europe. Surely, such expressions would never be heard in the USA, right? Think again. From the streets of Orlando to a mosque in Jersey City, the outrage was directed towards Jews.

I could go on and on, and no doubt in the coming days, there will be more outbreaks of Jew hatred resulting from Trump’s (correct and just) decision to move our embassy to Israel’s true capital, Jerusalem.

This conflict is not about land. It is about religion. That is not to accuse all Muslims of being Jew haters. Surely, there are millions of secular Muslims who could care less about the Koran’s attacks upon Jews (and Christians). I would bet that most Sufi and Ahmadiya Muslims are not involved in all this. However, they are themselves considered heretics and persecuted by mainstream Muslims.

In addition, while organizations like CAIR are quick to condemn acts of terror on our shores (insisting it had nothing to do with Islam), where are their condemnations for these types of utterances? It is true that a CAIR official in New Jersey, Jim Sues, much to his credit, condemned the sermon of the New Jersey imam who called for death to the Jews. The mosque itself has directed him to undergo “retraining”. Retraining for what? His words come from Islamic texts! The national leadership of CAIR is silent, however.

The Europeans seem unable or unwilling to stand up to the onslaught and defend their Jewish citizens – to say nothing of their own civilization. What I would like to see is for President Trump to make an unequivocal statement that anti-semitism will not be tolerated in this country. Those who don’t understand or accept that message should return to their anti-semitic hellholes, from where they came. History is being repeated before our very eyes. “Well, it’s not genocide, at least,” you say. Not yet because very few Jews are left in Muslim countries. But what about the Christians in the Middle East? That’s another topic the folks at CAIR won’t talk about.