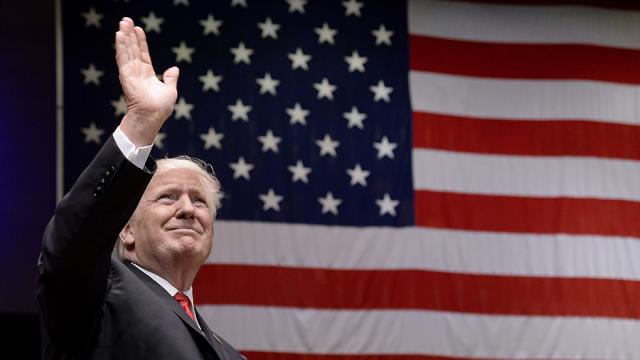 Those who are still predicting that Donald Trump will be impeached and removed from office are now like exotic and endangered creatures. It is like an absurdly slow dance, in which the steps are so infrequent and tentative that it is hard to remember how far participants have come since the music started. Two years ago, virtually the entire commentariat, and most of its readers and listeners, were splitting their sides at the gigantic impending farce of the Trump candidacy for the Republican nomination. Eighteen months ago, those same people had almost entirely shifted their immense mirth to the mighty Hillary Clinton avalanche that was already starting to rumble down whatever it was that President Obama renamed Mount McKinley.

The BBC was asking itself (i.e., its viewers, including any Americans watching its World Service) whether Trump was going to pull out then, to avoid the unprecedented thrashing he was about to receive at the polls (which none of the polls, even the more rabidly anti-Trump polls, then predicted). Wacky leftist filmmaker Michael Moore, with the unshakeable confidence in mind-reading that seems never to desert such people, announced that Trump would quit because he never wanted or expected to be nominated, and it was all a joke that had got out of hand.

These were not unrepresentative opinions. Trump was attacking the entire political establishment, the whole Washington sleaze factory, all factions of both parties, all the Bushes, Clintons, and Obama, the national media, the lobbyists, Wall Street, Hollywood, and the limousine Left from the Hamptons to Silicon Valley. Of course the Trump campaign was insane and impossible, and was doomed to be a ludicrous fiasco, a gigantic, comical clown act that misfired horribly.

On Election Night, Nobel prize–winning (for economics) New York Times columnist Paul Krugman said the stock market would “never recover” from the Trump victory. (It has set a new all-time high more than 90 times since.) The alarms about effective Russian intervention in the election and the confected creation of the Trump collusion myth were born with indecent haste. The ranking Democrat on the Senate Intelligence Committee, Mark Warner of Virginia, was soon solemnly announcing that there had been a thousand Russian agents actively assisting the Trump campaign in key swing states and that they had delivered Wisconsin, a complete fabrication (if he really believed this whopper, I have some oceanside property in Oklahoma to sell him).

A year ago, efforts were still underway on recounts, especially in Wisconsin (which resulted in increasing Trump’s margin of victory by 131 votes), and there was national television advertising, costing millions of dollars, directed at the 306 people who had been chosen to cast Electoral College presidential votes for Trump, to break their pledges. (Seven electors did so and voted for third candidates, but five of the defectors were from Mrs. Clinton.) Plans were underway to disrupt the inauguration, and engage in widespread civil disobedience; the new Democratic National Committee chairman pledged “scorched earth” obstruction; Bruce Springsteen, singing to bemused Antipodeans in Perth, Australia, crooned, “We are the Resistance!”; Madonna (who had generated a slight rise in Trump’s poll numbers by promising to fellate wavering male voters who went for Hillary) spoke of wanting to “blow up the White House.”

Veteran black-activist congressman John Lewis said Trump was “illegitimate,” and the ancient and unfeasible congresswoman Maxine Waters screamed “Impeach 45,” for causes that would become apparent as the process proceeded. Talk shortly turned to that option. As the president and his wife and party left Washington on May 19 for Saudi Arabia, Israel, the Vatican, and Brussels, ABC political commentator Nate Silver rated the chances of impeachment at 25 to 50 percent, and David Gergen — a former assistant to Presidents Reagan and Clinton, and a very knowledgeable man until he joined CNN and was infected by acute Blitzeritis – said, “We are moving into impeachment country.”

A long sequence of crises was fanned by the Trumpophobic media: Senate Democratic leader Chuck Schumer and the Statue of Liberty were (according to Schumer) weeping over the fate of Yemenis and Libyans not allowed onto aircraft bound for the United States. The president’s expressed thought over the Charlottesville riot — that Antifa and the extreme section of Black Lives Matter that applauded the killing of white policemen might be as odious as the Klan and American neo-Nazis — was proof that Trump was a quasi-genocidal racist and apologist for slavery. Trump virtually dismantled NATO by not specifically mentioning the collective-security clause in his speech there; was signing the death warrant of the planet when he pulled out of the asinine Paris Climate Agreement; was going to blow up the world with Kim Jong Un; and so forth, ad nauseam. And all the while, the Russian-collusion fraud festered and grew, born of Clintonian denial and frenzied finger-pointing, and reinforced by the Steele dossier — a pastiche of scurrilous gossip and malice from the most dubious sources, including in the Kremlin, cited by Mrs. Clinton in her absurd memoir of the election as proof of her opponent’s treason.

She writes how she was betrayed by the country and most people in it, but not by the husband with whom she has enjoyed a storybook Pleasantville marriage. It only emerged after the publication of her book that Mrs. Clinton’s campaign had commissioned the Steele dossier, and had spent $10 million on it from Democratic campaign funds. (According to former party chair Donna Brazile, Mrs. Clinton had rigged the nomination from her rival Bernie Sanders.) The Clinton campaign desperately shopped the Steele dossier to the American media in the last days of the campaign. This was the all-time dirty trick of U.S. political history, and when the rock was lifted and she was exposed as the sponsor of it, Mrs. Clinton instantly switched gears and called it “campaign information.”

This last year, after the year of his nomination and election, has been the second round of Donald Trump’s war to crush and expel the American political establishment. This year he has won over the congressional Republican party, which had almost entirely opposed him, to toil in the enactment of his program. Together they have achieved the greatest tax reform and reduction in over 30 years, largely emasculated Obamacare, put a rod on the backs of those states that elect incompetents like Jerry Brown and the Cuomos and lay the resulting state income taxes off on the whole country, repatriated trillions of dollars of corporate profit, exonerated over half the people from personal income taxes, reduced the return of 80 percent of taxpayers to a postcard, and produced conditions for 4 percent GDP growth next year. The Obama apologetics that a flatlined economy with a shrunken work force and a burgeoning multitude of Medicaid-sedated idleness was the new normal has been debunked; it is the abnormal recent past.

For all of these and many similar reasons, the assertions of even fair-minded and perceptive commentators that Trump has done poorly in holding only 37 to 40 percent popular approval is mistaken. Considering the sustained assault of 90 percent of the media, in which the normal honeymoon for a new president has been replaced by a daily media assassination squad, he has done well. In the post-Watergate era of the criminalization of policy differences, instead of waiting a while before firing the nuclear option as accusers had with Nixon, Reagan, and Clinton, Trump’s enemies fired this blockbuster after a few months. Undismayed, he has ripped open the facade of the Justice Department and the FBI and exposed morally corrupt hacks within, while heaping praise on the FBI rank and file. At year’s end, his enemies, battered and almost unrecognizable from reruns of their gamecock assurance of a year, let alone two years, ago, are reduced to the shabby jobbery of claiming he is about to fire the special counsel. Trump has cooperated entirely with the special counsel, who has illegally seized evidence from the General Services Administration, recruited and tolerated hysterically anti-Trump people on his staff, and relied on the unspeakable Steele dossier, while a senior Justice Department official has been caught red-handed in improper contact with Steele, with whom the official’s wife worked during the election preparing the anti-Trump dossier.

Donald Trump was a joke until nominated, unelectable until elected, incompetent until he succeeded on most fronts, and about to be impeached until he debunked the collusion nonsense; he has had a very successful year. His enemies have been weighed in the balance and they have been found wanting. They shall have their reward. Merry Christmas and Happy New Year to all readers, especially the president and Mrs. Trump.

— Conrad Black is the author of Franklin Delano Roosevelt: Champion of Freedom, Richard M. Nixon: A Life in Full, and Flight of the Eagle: The Grand Strategies That Brought America from Colonial Dependence to World Leadership.