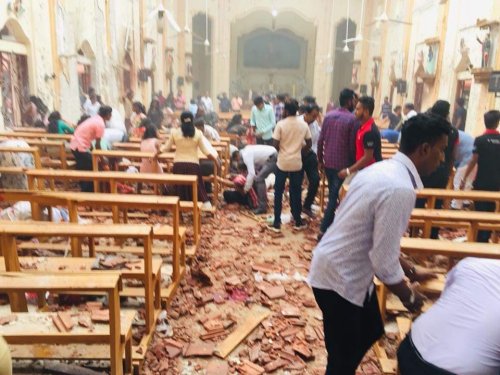 Bomb explosions have also been reported from Kingsbury, Shangri-La and Cinnamon Grand Hotels in Colombo.

The bombs have gone off at the same time in all the churches at around 8:45 am local time, according to reports.

Minister Harsha de Silva said there were many casualties including foreigners. The injured are being rushed to the Colombo National Hospital. More than 80 people have been hospitalized, the reports say. Another explosion have been reported from the Zion Church in Batticaloa.

The police reminded the public that spreading rumors and inaccurate news is legally punishable crime asked the people to refrain from stirring communal violence.

Suicide bombing had also been a tactic of the Tamil Tigers terror group. However the warning given last week by the Chief of Police was about intelligence of another group. From the Irish Journal

Sri Lanka’s police chief made a nationwide alert ten days before the that suicide bombers planned to hit “prominent churches”, according to the warning seen by AFP. Police chief Pujuth Jayasundara sent an intelligence warning to top officers on 11 April setting out the threat.

“A foreign intelligence agency has reported that the NTJ (National Thowheeth Jama’ath) is planning to carry out suicide attacks targeting prominent churches as well as the Indian high commission in Colombo,” said the alert. . .  11 Churches would be attacked. It was further warned that all the Catholics should go home and this should be informed to all the families.

The NTJ is a radical Muslim group in Sri Lanka that came to notice last year when it was linked to the vandalization of Buddhist statues.

One of the prime reasons for the casualty being so high could be due to the fact that a suicide bomber was involved. The attacks at the Shangri La hotel and the Batticalao Church appear to be the handiwork of a suicide bomber.

The initial impressions also indicate that RDX could have been used in the attack and hence the impact was so high. . .  Reports suggest that the suicide bombers have been identified as Zahran Hashim and Abu Mohammad. An Intelligence Bureau official in India tells OneIndia that the target was clearly the Catholics.

With the blasts today, the intelligence in Sri Lanka has warned that there could be more attacks. The country has been placed under very high alert and security has been tightened all over.