This dreadful assault occured in Worcester on Saturday afternoon; beautiful, cultured, county town and cathedral city of Worcester. A three year old boy in a push-chair was with his mother shopping when four men attacked and 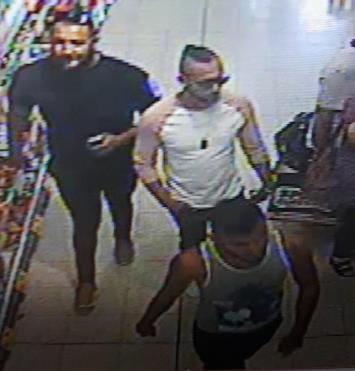 he was doused with a pink corrosive substance causing nasty burns. One man was arrested promptly – he turns out to be the child’s father who lives in Wolverhampton (the other side of Birmingham). The other men sought (CCTV left) were found in Walthamstow in East London, and are from whatever the politically correct way to describe Gypsy, Roma, Romany, etc is, from eastern Europe. They are ‘accomplished bare-knuckle fighters’. Such things are not rare in my former home borough.

A fifth man was arrested in Wolverhampton last night and all five are to appear at Kidderminster Magistrates court today facing charges of Conspiracy to commit greivous bodily harm. The police refuse to release their names ‘for legal reasons’. And while there is good reason, the best of reasons to protect the child’s identity, and that of his mother (who is believed to have been the intended target) the secrecy that surrounds all assaults by men with a certain background arouses suspicion.

This is from The Sun.

THE dad of a three-year-old boy sprayed with acid was among five men being questioned today over the horrific attack, sources have claimed. The child suffered burns after he was doused with a noxious pink chemical in his pushchair while shopping with his mum and older brother and sister at a discount store.

His father, believed to be a 39-year-old Afghan asylum seeker, was apparently arrested in Wolverhampton 30 miles away on Sunday. It’s believed the father discovered the whereabouts of his estranged wife when a photo appeared in a local newspaper in Worcester showing one of their children at a school event. (getting involved with the infidel community – how dare she!)

Three other men – believed to be Eastern Europeans – were picked up the following day at an address in Walthamstow East London. A fifth man, believed to be a relative of the dad,was arrested in Wolverhampton today.

All five suspects were being questioned over a plot to inflict grievous bodily harm.

A source close to the investigation said the boy’s mum had split from his father after the husband complained she had become “too westernised”. The source said: “When they lived together in Wolverhampton she wore a full veil. But as she continued to live in the country she became more and more westernised and started wearing different clothing that didn’t cover her face.”

Neighbours (who have)  have lived on the road for fifty years said ““The woman involved was a lovely lady, she was in her late 30s, 39 or 40 and moved from Afghanistan about ten years ago, She spoke really good English and was studying maths at college. I do not know how they found her, it’s very strange, when she moved here she asked if there were any other Afghan families but there aren’t. She seemed very happy, she would drop the kids off at school every day and pick the kids up and do the shopping. She was a lovely lady, the kids were wonderful, brilliant, “

The police are saying that the public must not be alarmed as this is an ‘isolated incident’. But just looking for any update from the court this morning I found this report of a woman squirted with acid by a moped rider in nearby Birmingham yesterday morning. And elsewhere in Birmingham yesterday afternoon

When the five men, three from London and two from Wolverhampton, were charged West Mercia Police said they would not be naming them ‘for legal reasons’. However, given they will shortly appear in court the names of four can be revealed for the first time.

The four men are: Adam Cech, 27, Jan Dudi, 25, and Norbert Pulko, 22, who are from Slovakia and live in London, and Afghan-national Jabar Paktia, 41, of Wolverhampton, West Midlands.

A 39-year-old man, who is the boy’s father, cannot be named for legal reasons.