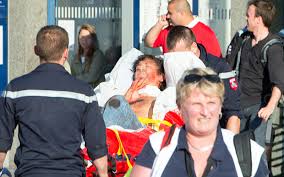 According to  U.K. Telegraph, AP , New York Times and other media reports, a Moroccan émigré jihadist boarded the Thalys fast train in Brussels with 558 passengers Friday. He was heavily armed with an AK-47, five magazines of ammunition, a hand gun and knives. Shortly after boarding he began shooting at several passengers wounding a Briton and American. One of the three victims was severely wounded in the neck.  Three off duty US Marines quickly subdued the perpetrator with the assistance of other passengers. One of the Marine took a bullet and was wounded in the ensuing melee. The Times reported:

The Belgian prime minister, Charles Michel, said on Twitter, “I condemn the terrorist attack,” and expressed his sympathy for the victims.

A French actor, Jean-Hugues Anglade, who appeared in the 1986 film “Betty Blue,” was aboard the train. Mr. Cazeneuve confirmed French news media reports that the actor was slightly injured.

In an indication of how seriously the French were taking the assault, President François Hollande issued a statement Friday night saying that “everything is being done” to determine what had happened on the train, having handed the investigation over to the country’s top antiterrorism investigators.

One passenger, identified only as Maxime, told a local newspaper, La Voix du Nord, that the assault had lasted about two minutes.

“The train started slowing down, before suddenly stopping,” the passenger was quoted as saying. “We saw people covered in blood, jumping off, running, then rolling into the grass. They looked totally shocked.”

Another passenger reported two gunshots. “But we thought it was coming from the train, that there was some problem with the train,” the passenger, Maty, told the newspaper. “Then the train started to brake, and it stopped in the middle of the countryside.”

All of the passengers were taken to a gymnasium in Arras until they could be identified by the French police.

The U.K. Telegraph noted other passengers who assisted the Marines in tackling the perpetrator.