Veterans Against Terrorism # I am Soldier X

To Leicester Square to meet the Veterans Against Terrorism who were marching to protest about the treatment of servicemen, and in particular ex-servicemen; in particular to raise awareness of the tragedy of PTSD, housing, persecution of veterans for incidents in Ireland 40 years ago, and most recently the discharge of the young man known as Soldier X. 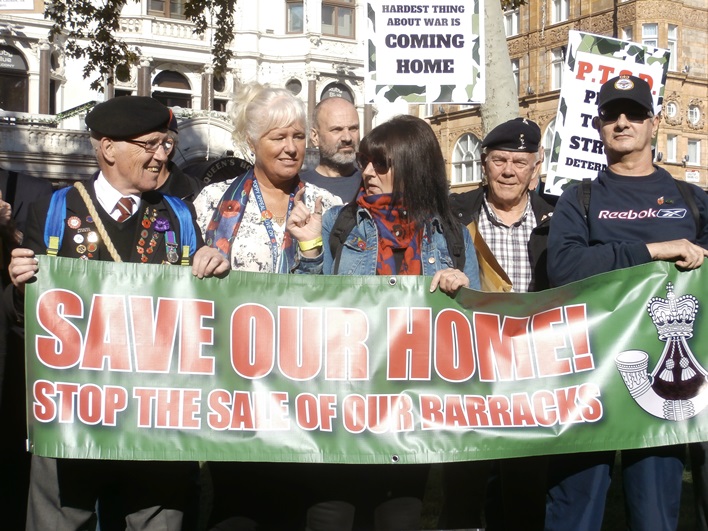 It was a lovely sunny autumn day, and as befits something organised by ex-soldiers we moved off in good order at 1pm. There was a good mix of men and women, young and old, and many families. 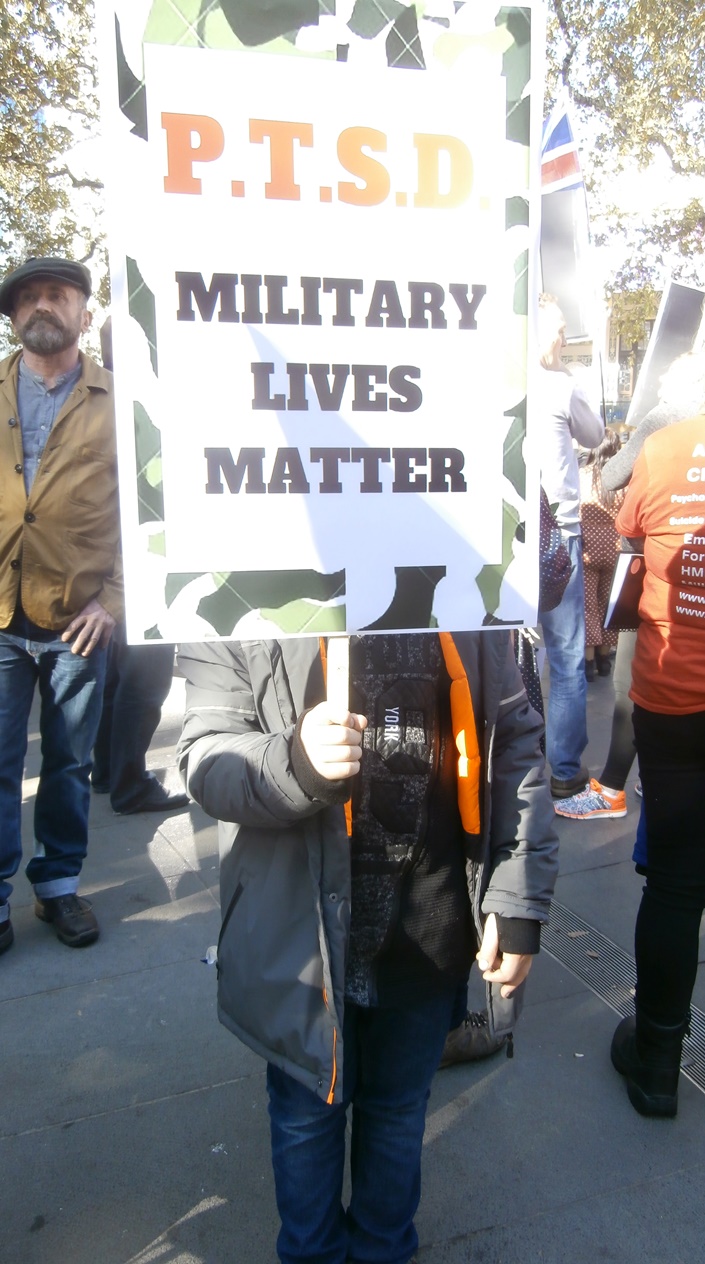 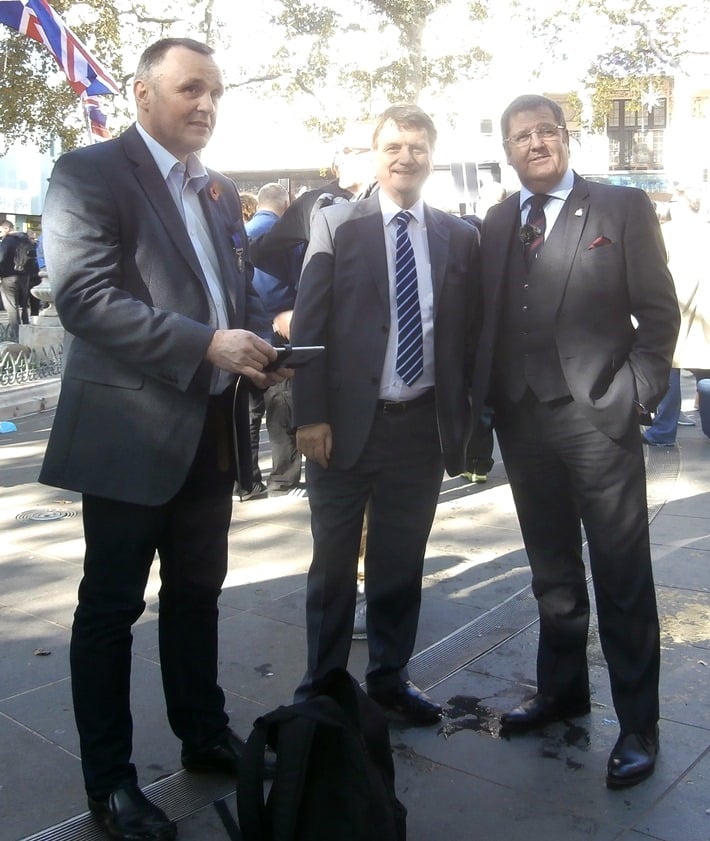 The march was led by a piper, and stewards, 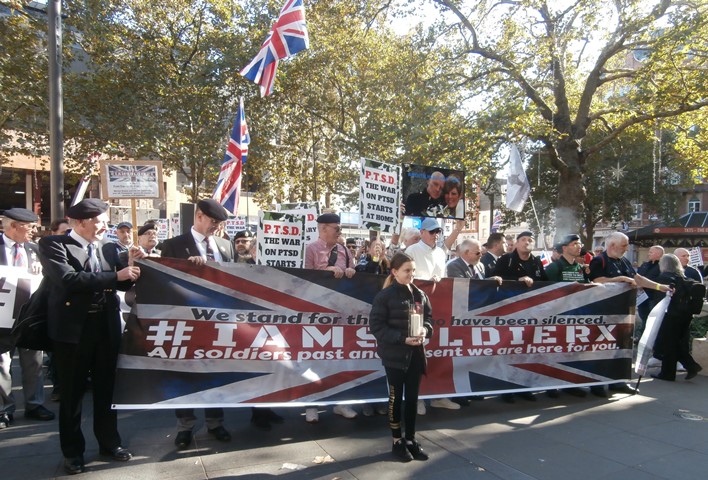 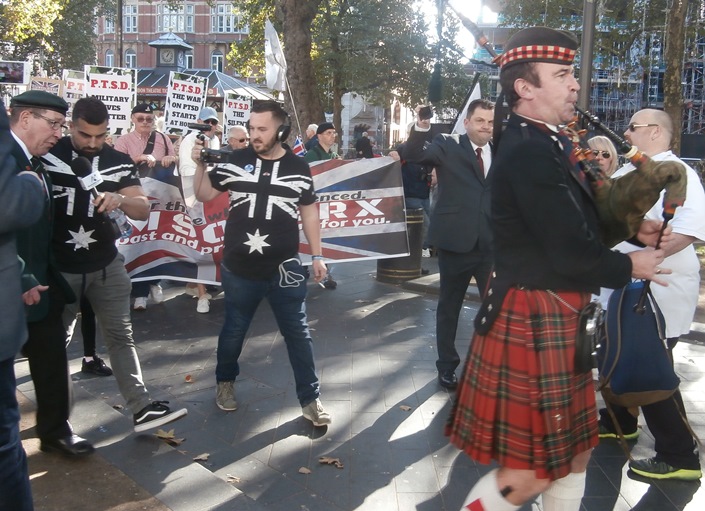 Above Avi Yemeni, president of the Q Society of Australia and journalist is in London to report on the trial of Tommy Robinson on Tuesday. 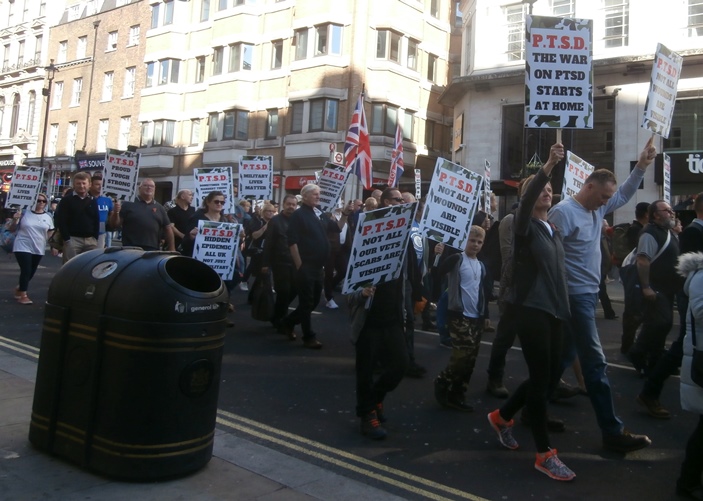 From Pall Mall we marched across Trafalgar Square where the Anti-Brexit, we want another vote, rally was gathering. Now the two causes are not mutually exclusive. It should be possible for a decent person, who genuinely believed that flawed as it is, we are better in the EU trying to reform it from the inside, to also believe that ex-servicemen deserve aftercare and treatment. 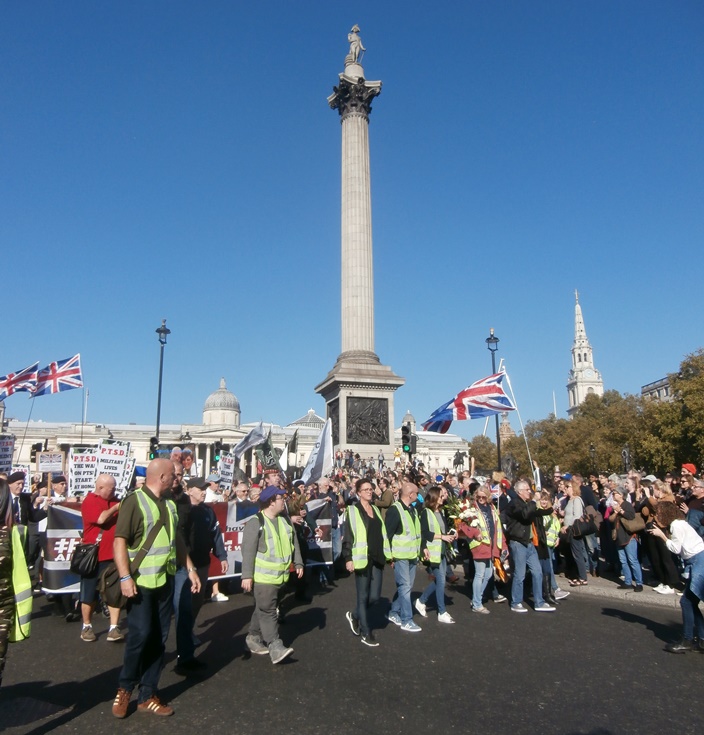 The veteran’s marshal with the megaphone called out, ‘come on, let’s have a round of applause for our veterans’.  And to give them their due a few people did applaud. Others looked totally bemused, or rather condescending. ‘How bizarre’ was one comment I overheard. 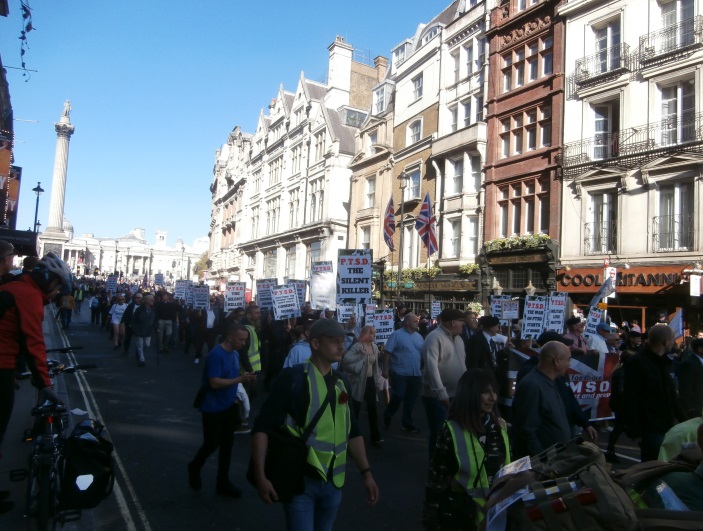 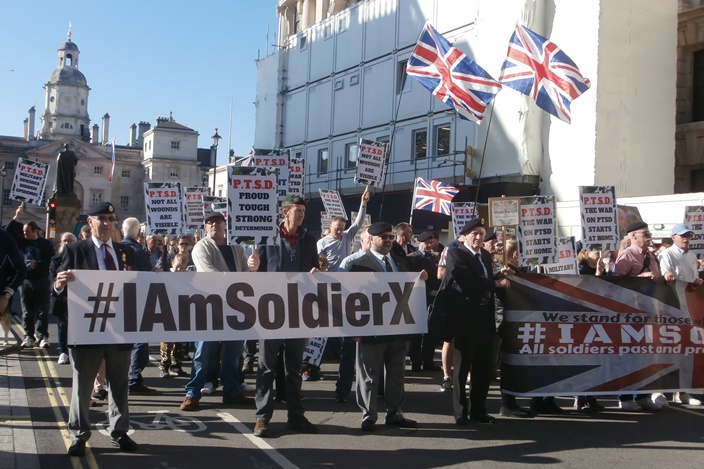 We marched down part of Whitehall to our rally point in Horse Guards Avenue by the Ghurkha memorial. A wreath was laid, and the bugle sounded the last post for a minute’s silence.  The candle which has been carried from Leicester Square by a child whose father had died was placed on the table. The names of 48 men and women who have died or committed suicide as a result of their PTSD was read out. Behind us the Remoaniacs began to saunter down Whitehall. 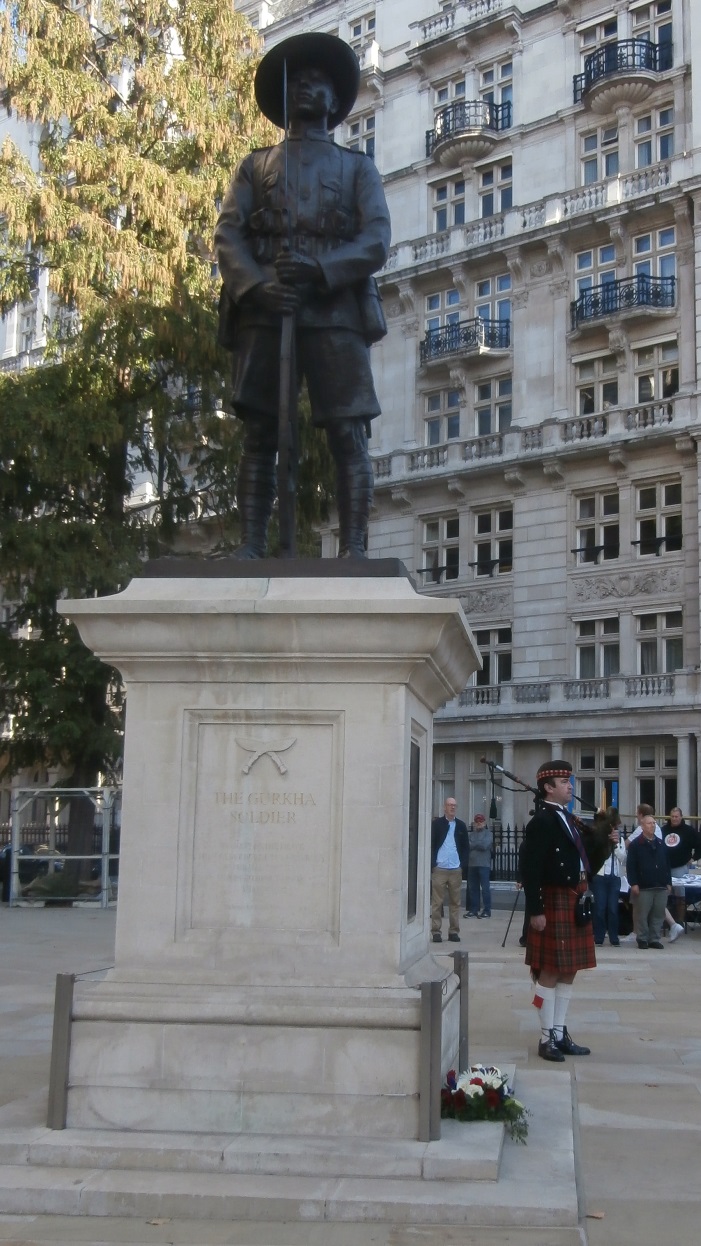 Speeches began. Gerard Batten, the leader of UKIP spoke first.  He spoke of the intended merger of the British armed forces with the other countries of Europe into an EU force. The armed forces are being run down in readiness. This won’t stop with the Brexit vote; Theresa May has said that this will continue even after we leave the EU under the new Security Treaty. There was a noisy police helicopter overhead – no cuts to the police helicopter budget here. 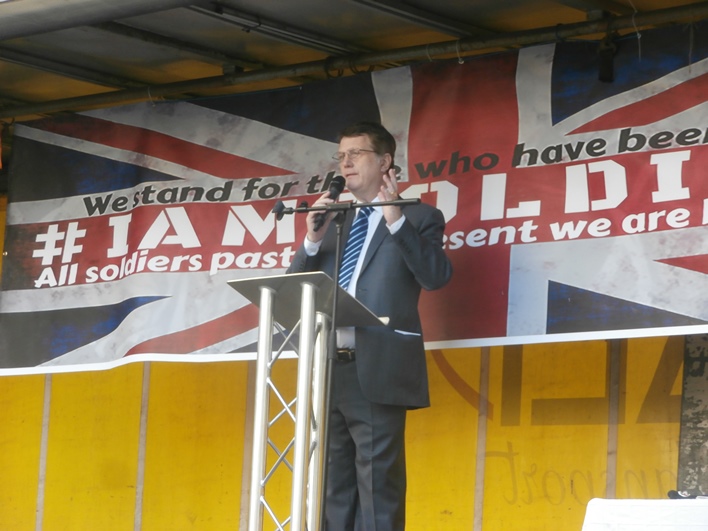 He explained that the EU is a state, it has its own currency, flag, laws, all it lacks is military force, and that is what the New Security Treaty is.

He said that our soldiers are subject to a witch hunt. Men in Northern Ireland took action in a split second in action; decades later old men in their 70s are dragged into court. Meanwhile the bullies of the IRA are protected from any repercussions.

He spoke of how only recently the US General Petraeus has said how the EU treaty on human rights conflicts so badly with the Geneva Convention on when a soldier can use force, that it severely affects US alliances. He confirmed that UKIP is committed to NATO.

Angelica Ashbrook Heyworth works as a crisis co-ordinator and in suicide prevention. She spoke of her own experiences as the mother and mother-in-law of servicemen who have suffered PTSD. She told of the Suicide web whereby when a person commits suicide members of their family are sucked into the web of grief, and further suicides in the family over the next 10-15 years are not uncommon.

She looked up at the Ministry of Defence building that we were outside “Can you hear me Gavin (Gavin Williamson, Minister of Defence or whatever highfalutin title the responsibility is called now) she shouted. 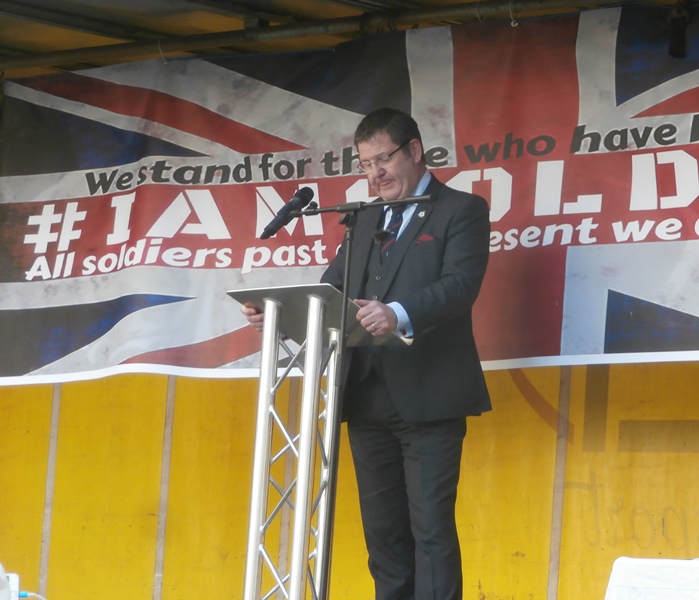 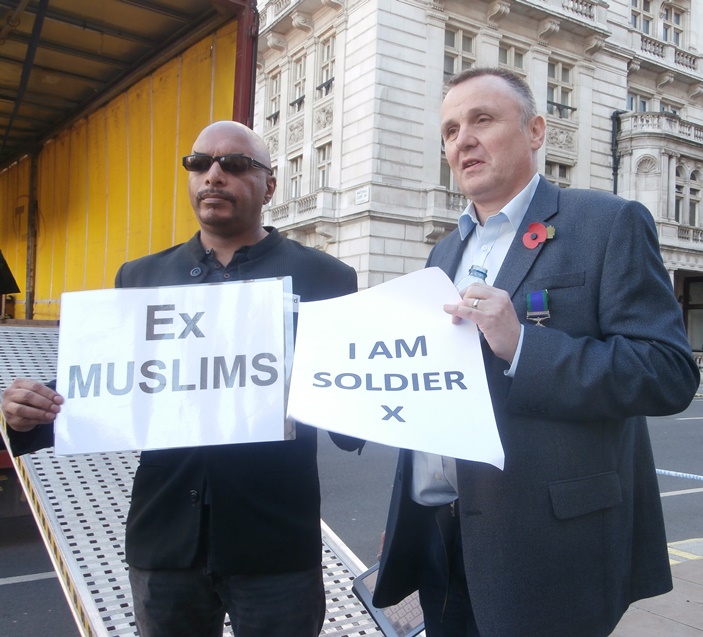 This is Mohammed Fiaz and Richard Inman .

Richard Inman said Soldier X is every soldier or veteran let down by the army and the establishment.  In 1914 -18 men suffering from shell-shock as it was then called were court Martials for desertion and shot.

A tank commander who saw his men die in their tank and was badly burned trying to rescue them met them every night for the next 30 years in his sleep. His children thought the landing light was left on for them; but it was dad who had the nightmares.

Soldiers who served in NI terrorised and demonised by the propaganda of the IRA, while the IRA are given succour by the British Government.

Marine A is Soldier X

I am soldier X

Veteran Simon Bean MBE sent apologies for absence and his message was read. Another veteran spoke.  Anne Marie Waters of For Britain and her team were present but she didn’t speak.  Nick Lowles of Hope not Hate had apparently been spotted ‘observing’ at the beginning.

By this time the Remoaniacs had started to wander away from their rally and were filing down both sides of Horse Guards Avenue, either side of our rally. And while some of them continued to look rather condescending, others were speaking in French, German and languages I didn’t recognise so I couldn’t tell their attitude, but it was irritating and a bit rude although not a problem. Until a group of women, one with a large EU flag walked into the crowd. The woman with the flag started to insult the British Army. She caused offence and women started to remonstrate with her. She was relieved of her flag and the police took her to one side, and she was then escorted away down Whitehall Court. The other Remoaniac ladies (their yellow badges say ‘Bollocks to Brexit’ by the way)  made their excuses and left while she was being spoken to by the police. 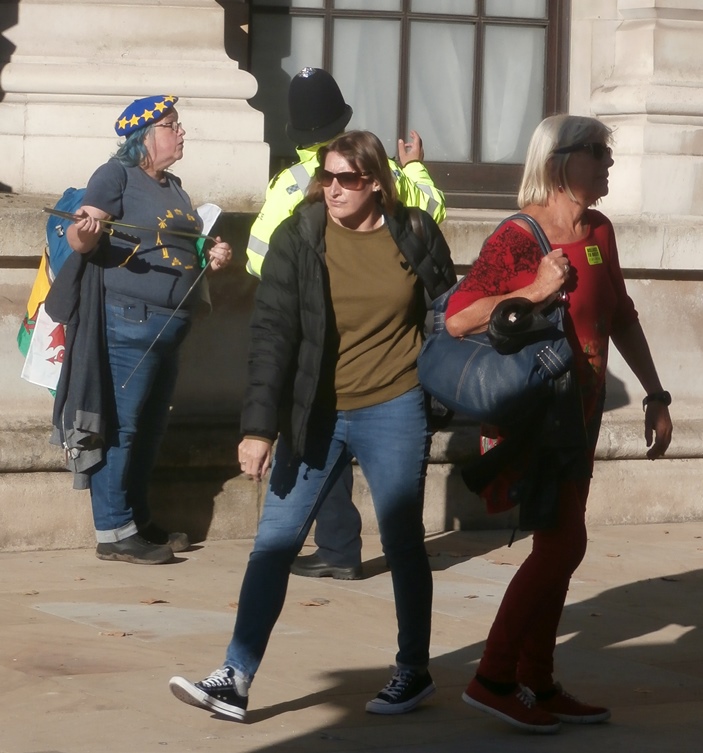 The final speaker was Tracy of Justice for Our Boys. She spoke of the trauma, not of combat but of the loss of a child. What we have suffered as the parents of a murdered child is called ‘survivor’s guilt’. What could I have done differently the night they were killed.  I should have protected him, but I wasn’t there. And the people who should have helped, the police, have been completely obstructive. We have been made to feel like the criminals when we are the victims. 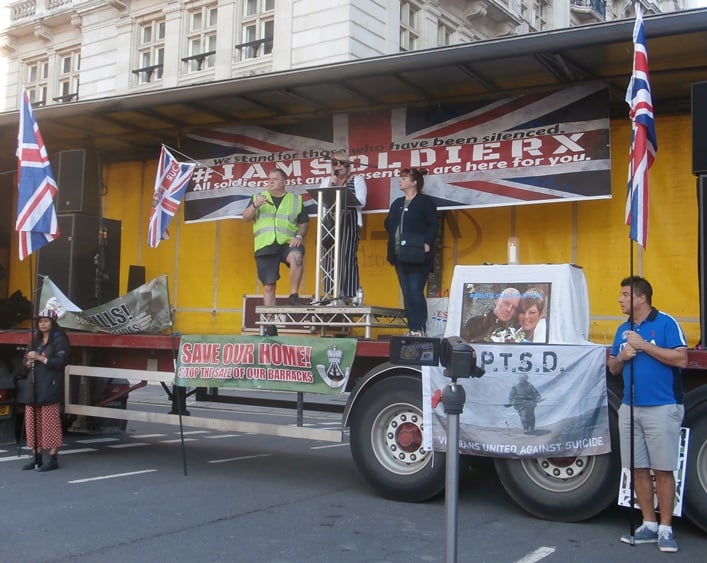 The candle was extinguished. We ended with prayer and a blessing and the piper played the National Anthem.