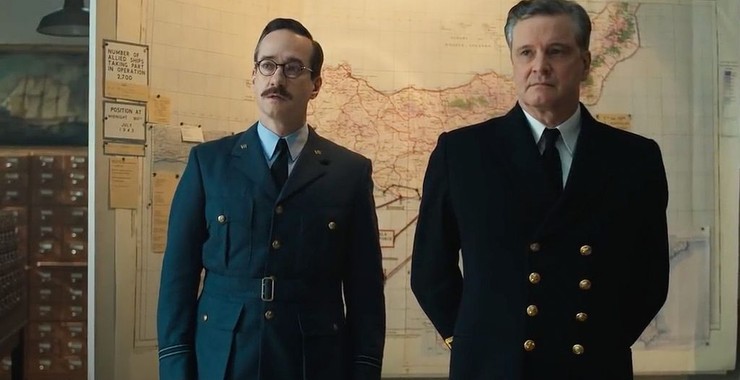 Scene from the film Operation Mincemeat

I guess I’ll have to change my plans. I should have realized there’d be a cunning enemy. It is of the highest importance in the art of detection to be able to recognize out of a number of facts which are incidental, and which are vital.

Almost everyone relaxes at some point by reading a mystery novel, a book of deception in which readers engage for a variety of reasons: out of curiosity, suspense, fear, analysis of the makeup and motives of the characters, perceiving and enjoying the triumph of good over evil, and attempting solving the puzzle.

Deception is an art, not a science, one creating unfamiliar and unusual happenings in order to confuse and deceive. That unfamiliarity is crucial. You do not win in battle the same way twice. Deception is a form of behavior present in all aspects of life, politics, economic or in entertainment, and in all countries to various extents. In Russia after the 1783 annexation of Crimea from the Ottoman empire, Count Potemkin, is said to have deceived Queen Catherine, by building external facades to pretend villages were behind them,. Whether the story is true or not,  “Potemkin Village” has come to mean  any construct that is meant  to hide the  absence of reality. Nazi Germany cleaned up its Theresienstadt   concentration camp  to present it in a false light to the vising Red Cross officials. Northern Ireland in 2013 to impress visitors, put large photographs of prosperous activity on windows of closed shops in the town of Enniskillen, site of several events and bombings during the Troubles. Despite being internationally monitored, India exploded a nuclear device.

One surprising and successful example of political deception is the amazing secret British plan to persuade the U.S. to enter World War II. British foreign intelligence, MI6, planted a number of pro-British stories and broadcasts in American media.   A main one was about a mission into Nazi-occupied France, in which British soldiers parachuted into an airfield, overpowered the German occupiers, and destroyed 30 planes, and all safely returned to Britain with 40 German prisoners.

The story was completely false, devised by Canadian entrepreneur William Stephenson, head of MI6’s U.S.  office. The fake news, and a later fake map and photo showing Adolf Hitler planning to invade South America, were meant to counter the campaign of Charles Lindbergh and the America First Committee, which was said to have more than a million members, against U.S. entry into World War II. The fake map outlined Hitler’s plan for a new South   America    divided into five new states, each with its own gauleiter, one of which included the Panama canal. Hitler would therefore be at the U.S. southern border.

This was political deception, an attempt to change the mind of President F.D. Roosevelt and of the whole American population, but more important in history and at present is military deception. Politics is notable for dirty tricks, efforts to   subvert and damage an opponent’s campaign or image   by lies, disinformation, spying.  A common one is the “October surprise,” negative false information that   appears just before an election, giving one’s opponent little or no time to respond.  In democratic political systems, deception is universal.  In the U.S. it was present from the beginning, In  1800 supporters of Jefferson  asserted that his rival John Adams planned to go to war with France, and had a  “hermaphroditical” character.

In 1828, the candidate Andrew Jackson was accused by supporters of rival John Quincy Adams of executing his own men in war and of engaging in cannibalism.  Jackson’s people responded by accusing Adams of providing sex workers for the Russian Tsar.

In retrospect it is interesting, often amusing, to recall a few of the more recent attempts at political deception in the U.S.  The famous one that destroyed the president Richard Nixon was the Watergate scandal in 1972, the break in  by a group of republicans at the offices of the Democratic National Committee.  In 2000 supporters of George W. Bush  accused  John McCain of having an illegitimate  African -American daughter.  The staff of Hillary Clinton in 2008  circulated  pictures of Barack Obama in African dress, and claimed he was a Muslim.

From the dawn of history, from Biblical narratives, the Trojan Horse, ancient Sumer, and the Hittites in 1274 BC deceiving  the Pharaoh and the Egyptians, to the present day, military leaders have benefited from this  device of deception. Characteristics are  disinformation, psychological operations, unpredictable conduct, concealment, the use of decoys, false information to lead the enemy to false conclusions and make them change their plan. These factors must have an effect on the mind, and on what the observer is meant to believe.

Every military commander is familiar with The Art of War by Sun Tzu, and its  dominant theme, “All war is based on deception. Hence, when able to attack, we must seem unable…when we  are near we must   make the enemy  believe that we are far away. We must hold out baits to entice the enemy.”

Deception was key to Allied victory in World War II. The main key was to persuade Hitler that the Allied attack in 1944 would not be in Normandy. and to make the Germans deploy men and material to areas that the Allies were not going to attack.  Another aspect of deception was  to make the Germans expect   an invasion of Norway by using false marks  of  tanks and vehicles. Another was the creation  of a fictious army group, in  southeast England, opposite the Pas de Calais,  under the command of General George S. Patton.  The fake army was more probable with fake  radio traffic between fictitious units.  This German intelligence was fed false reports.  In Africa, German planes wanting to bomb Alexandria , were deceived by the creation of a illusion of a false city by the skilled magician  Jasper Maskelyne.

The issue of military deception has become very public with the appearance in May 2022 of a new fil , Operation Mincemeat, the true  story of a remarkable scheme, planting misleading papers on a corpse that would  be found by the enemy Nazi Germany.

The planting of deliberately false document had been used on previous occasions.  In World War I the device, known as the Haversack   Ruse, was used in October 1917 during the Sinai and Palestine campaign.   A haversack with false British battle plans was “accidentally” dropped by British horseman, and fell into the  hands of the Ottoman enemy.  The ruse led to British victories in the  battle  of Beersheba and Gaza. On another occasion, in August 1942,  a corpse was placed, containing a map of British minefields, to be found by the Germans who used it to their disadvantage.

A most ingenious deception is presented in a new film, Operation Mincemeat, which  presents the true story of a remarkable event.  The plan was part of the Allied plot to deceive the Germans about the time and location of the invasion of mainland Europe in 1944.

Operation mincemeat was the extraordinary plan, seemingly impossible but true, that British intelligence devised, a plan  of using a corpse planed with false military information  to convince Hitler that the Allies would be invading Greece, not Sicily. A dead body was  planted  off the coast of Spain carrying  secret documents that the targets for invasion would be Greece and Sardinia., with Sicily as a pretense.  After a log search an appropriate body was found  in a morgue of a homeless, alcoholic tramp who  had  died from ingesting rat poison. The tramp  was converted into  British Marine Major, William Martin,  dressed accordingly to his rank with information on him    that contained a photo of  his non-existent fiancé, receipt for an engagement ring and theater ticket stub.

The body of Major Martin was launched from submarine HMS Seraph about a mile off the Spanish coast to be found by fisherman; the documents were then read by the Spanish police and then showed to the German intelligence.

Operation Mincemeat was a dish well swallowed. Hitler was recoded as believing “that the discovered Anglo-Saxon order confirms the assumption that the planned attacks will be directed against Sardinia and the Peloponnese.”  the Germans doubled the number of their troops on Sardinia, and then sent more to Greece .

The Allied invasion of Sicily landed on July 9, 1943, and was totally successful within a month.

Two tantalizing aspects of Operation Mincemeat. One is that a junior officer and a major player in the deception, probably the originator of the device of the dead body presented in a memo called the Trout Memo, was Ian Fleming, creator of James Bond. The other, rather touching, is that Major Martin is buried in Huelva, Spain, and that the Jewish American Society placed a memorial in the East London borough of Hackney to Major Martin.

PrevGoing Through Samaria
NER’s Second Salon: a Good Time was had by AllNext