The process is the punishment. 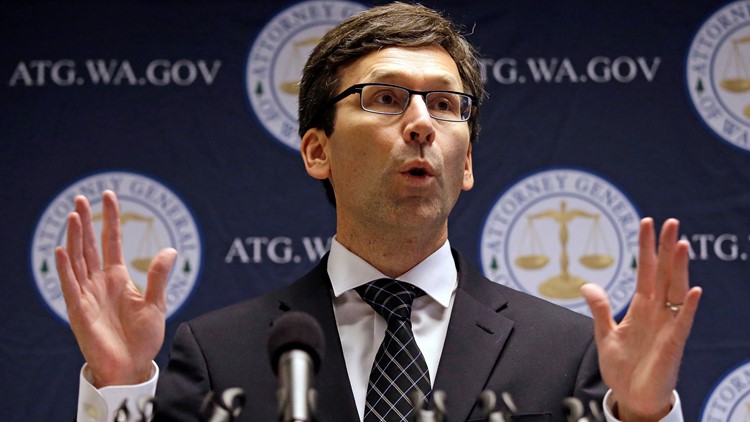 Bob Ferguson serves as Washington State’s Attorney General. He was elected in 2012 and came to national media attention in 2017 when he successfully blocked the Trump administration from implementing the Protecting the Nation from Foreign Terrorist Entry into the United States act (Executive order 13769), forcing the administration to repeal and rework the order (EO 13780 and Presidential Proclamation 9645) before it passed Supreme Court scrutiny. Ferguson, however, proceeded to sue the Trump administration 96 more times and was named one of Time Magazine’s 100 most influential people of 2017 for his efforts.

Back in the day, Washington state business owners proudly hung signs which stated: “We reserve the right to refuse service to anyone.” Under Bob Ferguson’s leadership, however, business owners in Washington State no longer have that right. He successfully argued the case against a Christian florist, Arlene’s Flowers, who declined to make floral arrangements for same sex weddings. For maximum effect, he argued before the State Supreme Court in an open setting at Bellevue College’s auditorium. What a show! This further burnished Ferguson’s bona fides as one of the political left’s favorite prosecutors and he was elected for a third term in 2020.

With his power and reputation growing as a star-prosecutor for Left-wing causes, AG Ferguson was nevertheless plagued by a conservative political gadfly by the name of Tim Eyman who has been a thorn in the side of the liberal establishment in Washington state for the past 22 years. Mr. Eyman’s strategy is simple: go over the heads of the politicians and appeal directly to the people through various tax-reducing ballot initiatives. Eyman estimates his initiatives have saved taxpayers over $54.864 billion and this, of course is deeply resented by the ruling establishment. 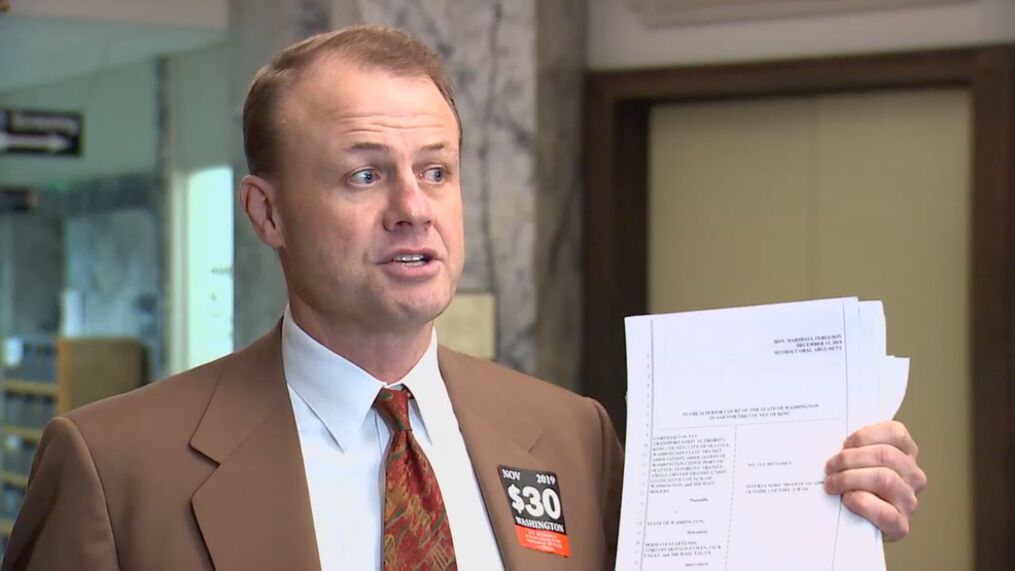 Ferguson, in his role as defender of the elite, set to work using his office of more than 600 attorneys targeting Eyman. As the head of Stalin’s secret police (the NKVD), Lavrentiy Beria, once said: “Show me the man and I will show you the crime.” Ferguson has used the full power and force of the state judicial system to bring down this man, even vowing never to settle the case. The state previously did, however, reach a plea deal with the Green River killer in which he avoided the death penalty for 48 murders. Tim Eyman must be bad, very bad indeed. However, according to Eyman’s attorney, the case boils down to:

[W]hether two transactions…needed to be included on 2012’s campaign reports. The Attorney General believes they should, we do not.

On the hypocrisy front, the democratic party in Washington state has played fast and loose with election laws for decades and have done so with little or no consequences. Glen Morgan explains:

In contrast, during one of many press conferences about the Eyman case, Ferguson spoke with emotion about “silencing Tim Eyman” and “removing” Eyman from the political process.  He is clearly on a crusade to crush Mr. Eyman in the belief that he would be removing an obstacle to the political left’s agenda. Ferguson is pressing forward regardless of the constitutionality of his actions. Ironically, Ferguson fundraises off the publicity of his prosecution of Eyman for his own campaigns.

For the first time in American history, as far as I know, a person has been defined by the state as a walking, talking Political Action Committee.  Not an activist, not an officer of a PAC, but a PAC itself.  This was just one part of a very disturbed ruling by Thurston County Superior Court Judge Dixon which reads like a rubber stamped, cut-and-paste ruling written by Attorney General Bob Ferguson himself.  The judge’s signature was just the afterthought and formality of the event.  The ruling can be found linked here.  While former Supreme Court Justice Richard Sanders did an admirable job defending Mr. Eyman and pointing out the obvious legal flaws and logical problems with this prosecution (see video of Sander’s closing argument here), one would never know a defense was even made looking at the final ruling.  Judge Dixon did exactly what AG Ferguson told him to do, and Judge Dixon dutifully ignored everything the State told him to ignore.  Fortunately for Mr. Eyman, the State didn’t ask for Eyman’s public execution, because Dixon would have granted that as well. After reading the ruling, it is hard to pretend anyone involved in drafting this document is aware the 1st Amendment or Free Speech actually exists in Washington State at all, even if only as a theory rather than a right.

As it stands now, Mr. Eyman has been fined $5.4 million and received a lifetime ban on future political activity. His attorney, former Supreme Court justice Richard Sanders, is working diligently and aggressively to appeal this absurd ruling which will certainly take years, during which time Mr. Eyman must abide by its laundry list of First Amendment restrictions.

We have seen this kind of judicial abuse play out on the national level after corruption at the FBI falsely instigated the Mueller investigation of President Trump and his campaign, and we have witnessed the unfair treatment of the January 6th defendants, but how many cases are there at the state level which are also being used to grind the Left’s political opponents into the dirt?

Mr. Eyman has been forced into bankruptcy, lost his house, and even lost his wife (who is still being targeted by Ferguson’s office which is trying to confiscate her IRA account). He’s been drained dry: the AG’s 10 years of litigation has cost Mr. Eyman every dollar he’s ever earned in his lifetime. The AG harassed and deposed some of Mr. Eyman’s top supporters and even targeted his sister-in-law as she allows Mr. Eyman to rent her condo. Shockingly, Ferguson has spent over three million dollars in taxpayer money on this one case — that’s more than all other cases over the last ten years combined!

Still, Tim Eyman refuses to lie down and die as Ferguson clearly hopes he will. Mr. Eyman is currently working on ballot initiatives for election integrity in several swing states (he recently traveled to Michigan) and continues to qualify ballot initiatives in his own state. He is truly a happy warrior and indeed there must be a freedom in knowing the state has thrown everything at him and yet, he has not backed down.

AG Ferguson will be up for re-election in 2024. Whether he runs for Attorney General again or opts to run for an even higher office, it is hoped that his abuse of power and process at the AGs office will be spotlighted by the opposition and that voters take note.

To donate to the Tim Eyman Legal Defense Fund to help Tim and his family fight back against this AG, go to TimDefense.com.

PrevWe Must Fight the Totalitarian Tendency Within Ourselves
Is the ice under judicial fraud getting thinner?Next