Watch on the Rhine: Cause for Alarm in Germany 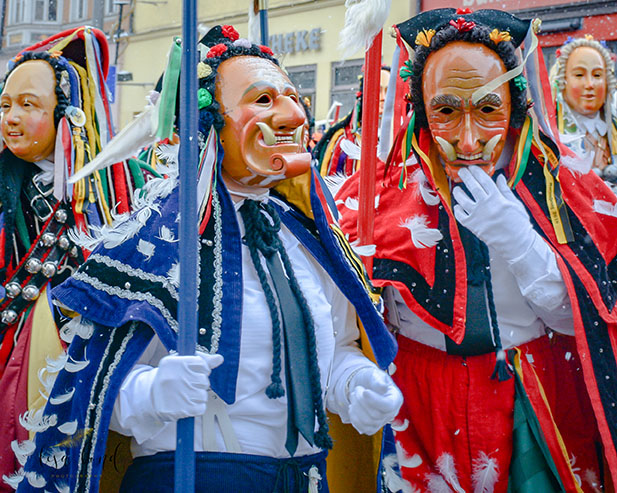 Mid-February in Germany is the week of Fasching, Carnival, the version of Mardi Gras, the time of celebrations, music, street parades with floats that satirize politicians, with masquerades, heavy drinking, of community events with dancers, acrobats, and extravagant costumes. Alongside, there is sometimes the burning of the Nubbel, a life-size doll made of straw that embodies all of the sins committed during Carnival season. However, not everyone will agree that all the sins in German politics have been eliminated this year, or believe this is the time for rejoicing. The past sins in Germany were remembered in the 75th anniversary of the liberation of Auschwitz took place on January 27, 2020.

The possibility of future sins is a cause for alarm in the country today. On February 10, 2020, Annegret Kramp-Karrenbauer, AKK, leader of the Christian Democratic Union, CDU, said she would not run for Chancellor of Germany next year as had been expected. She will also stand down from her position as leader of CDU. AKK was the preferred successor and choice of present Chancellor, Angela Merkel.  AKK, the leader of the small state of Saarland, had been picked by Merkel to become secretary general of the CDU and then leader in December 2018 after the party had rejected other candidates, Friedrich Merz, former leader of the CDU parliamentary group, advocate of free market, and Jens Spahn, Germany’s health minister, whose concern was extreme culture.

AKK made personal and political mistakes, including jokes about intersex toilets, offending the transgender community, and the youtube watching youth. But as defense minister to which she was appointed in July 2019 AKK did not want to work with fringe parties on left and right, the anti-establishment parties. That refusal led to the political crisis that occurred as a result of friction with the local branch of CDU in the eastern state of Thuringia over the appointment of the premier of the state. AKK was unable to prevent the local CDU from cooperating with the Alternative for Germany, the far-right AfD party, and the Free Democrat party in electing a compromise candidate. In February 2020 for the first time in the modern German Republic, the prime minister of one of Germany’s 16 state legislatures was elected with the help of the political far right. Chancellor Merkel called it “unforgivable.” The Free Democrat, FDP, Thomas Kemmerich was unexpectedly chosen, really to block the left wing candidate Bodo Ramelow, head of Die Linke. However, Kemmerich, who did not want any member of the AfD in his government  stood down after only one day and called for new elections. He followed the principle it is better not to govern than to govern badly.

The significance of the events was that the far right AfD had for the first time become a kingmaker. In a sense it had defeated the CDU leader. The AfD broke the Brandmauer, the firewall, the policy to keep the far right from any real power. Hitherto, since World War II politics in Germany had been ruled by various combinations of the CDU and SPD, parties that have weakened in recent years.

Recent election results, national and state, have been a wake-up call for democratic Germany, as they have in other European countries with the rise of far right and nationalist parties. Those parties have registered gains in Hungary, (Fidesz has 49%  and Jobbik 19% of the vote), Austria ( Freedom Party 26%), Switzerland (Swiss People’s Party 25.8%), Belgium (New Flemish Alliance 20.4%), Finland (The Finns 17.7%), Italy (The League 17.4%), and France (National Rally 13%). As a consequence all these political systems have been troubled.

But it is the German case that is of most concern. In the Federal Parliament, Bundestag, elected in September 2017 there are six major parties: of the 709 members the CDU has 246, the SPD  152, and the AfD  89. With his number the AfD can claim to be the largest opposition party. The party now also has representatives in all 16 of Germany’s state parliaments.

The most acute anxiety comes from the gains of the AfD in the elections in the eastern states in October 2019.  In Saxony the party got 27.5% of the vote, and  in Thuringia 23.4%, compared to the 22% of the CDU.

The AfD had started in 2013 as a group opposed to the euro in the EU. But it soon moved to a far-right party, one that is linked to the anti-immigration Pegida movement, founded in Dresden in 2014 to prevent Germany being “Islamified.” The AfD became concerned with immigration, Islam, invasion of foreigners, sealing EU borders, initiating identity checks, criticism of freedom of speech and the press, and increasingly antisemitic. It uses the world Voelkischto indicate extreme nationalism and racism, a symbol of Nazism and eradication of anything non-German.

The leader of the AfD in Thuringia, Bjorn Hocke is also the head of a group within the party called Der Flugel, wing, an extremist, fascist group. Hoche himself has been called a fascist in a German court. He is a prominent exponent of antisemitism, calling the Berlin Holocaust memorial “a monument of shame” and saying Germans are “the only people in the world who planted a memorial of shame in the heart of their capital.” His colleague the leader of the party in parliament and former chairman of the party , the 78 year old lawyer Alexander Gauland has spoken of the Nazi era as “just a speck of bird’s muck in more than 1,000 years of successful German history.”

What is frightening is a possible return to the past. In February 1930  Adolf  Hitler said the biggest Nazi success was in Thuringia, “where we are the most significant party, other parties trying to create a government cannot secure a majority without our cooperation.” It is ominous to see photos appearing of the parallel with the past: Adolf Hitler shaking hands with President Paul von Hindenburg, and Kemmerich greeting Hocke.

Indeed, it was in Thuringia in 1930 that the Nazis first won power locally before they achieved national power, and did so with the help of conservative parties. The local Nazi leader, Wilhelm Fricke was installed in power in the state, and appointed fellow Nazis to official positions. Fricke was to become Reichsminister of the Interior in the Nazi regime, and played an important notorious role in formulating the Nuremberg laws, the Nazi antisemitic and racist laws in 1935.

Not coincidentally, the Thuringia area was used by the Nazi regime as a storage for military facilities, and, as newly made known, the place where atomic tests were carried out, and where research on a plutonium bomb was carried out. Germany must return to the other history of the area, the place that was distinguished by the presence of J. S Bach, the Weimar Republic, Goethe, Schiller, Walter Gropius and the Bauhaus.