We had a better class of anti-fascist in east London when I was a nipper….

There are ‘far-right’ groups out there, and it sounds like an aphorism to say murdering people is wrong (Jo Cox MP, worshippers in Finsbury Park). But the description ‘far-right’ is used as an insult to any group not as far-left as the current incarnation of the three main British political parties, the three we call LibLabCon. Any suggestion that multiculturalism has not been an overwhelming success gets a cry of Nazi!!! Any concern that large scale immigration has changed our towns and cities such that we no longer feel at ease in our ancestoral home is greeted with ‘Fascist’, usually from a puny black-clad youngster in a face mask.

My husband refused to renew his union subscription a few years ago. “I’m not paying them £10 a month just to insult my wife and call her a fascist. I can insult her at home for free.” The groups and people I have followed, observed around England, supported these last few years, EDL, March for England, Football Lads, Tommy Robinson, Anne Marie Walters, Paul Weston, Liberty GB, Pegida etc are, as the EDL say, “Not far right; just not far wrong.”

But back to Oswald Mosley and his son Max who being some years older than me took a central role in the events of 31st July 1962. I being only 8 years old was whisked away in the back of my uncles’ car and never saw a single man in a funny shirt, much less doing a funny walk.

I have mentioned more than once that my father and his younger brother were present right at the back of Cable Street (such was the crowd) in October 1936 when Oswald Mosley and his British Union of Fascists tried and failed to march through east London. When war broke out both Sir Oswald and his wife Diana (nee Mitford) were interned as potential threats to the nation. She was considered far more dangerous. Sir Oswald was heavily influenced by Mussolini of Italy; Lady Mosley was a personal friend of Adolf Hitler and knew prominent nazis rather too well. After the war Mosley formed The Union Movement and it was on behalf of this party that he decided to address the crowds at two spots in east London on that afternoon. It was the school holidays, and also the period when my father’s workplace closed for the workers fortnight holiday. We were visiting my father’s parents in Bethnal Green. My grandmother wasn’t in and my youngest uncle having heard that “there are blackshirts rioting in Ridley Road” (Ridley Road was a street market in Dalston Hackney – my mother favoured it for drapery and haberdashery) and “we better go find Mum.” He owned a small car, my dad said he would come too, and they obviously were not expecting any real trouble as I was allowed along. A ride in a car was at that time a rare treat.

At the time there was a weekly programme called All Our Yesterdays which was a news roundup of the cinema newsreel and newspaper headlines of that week, 25 years previously. Dad and I always watched this together, so I had seen newsreel of blackshirts and Nazis and thought I knew what to expect. We drove down Kingsland Road passing the top of Ridley Road. It was more packed than during a market day but no stalls – people were jostling and shoving but nothing to frighten a child or endanger an elderly lady. The footage of Ridley Road Dalston starts at 0.26.

My uncle carried on. I now know from the second piece of newsreel below that the Blackshirts (who were in normal clothes after 1936) moved on to Victoria park Square which was much nearer my grandparents and uncle’s home.

But I don’t remember  seeing anything notable, neither did we see my grandmother who beat us back to her home and couldn’t understand the fuss. So that’s my anecdote about Oswald Mosley – I never saw nuffink.

Max Mosley is quite clear in the first newreel at 0.38, so he can’t deny it. The fights were man to man, with fists. The police wore helmets but didn’t have to wear armour like robocop. 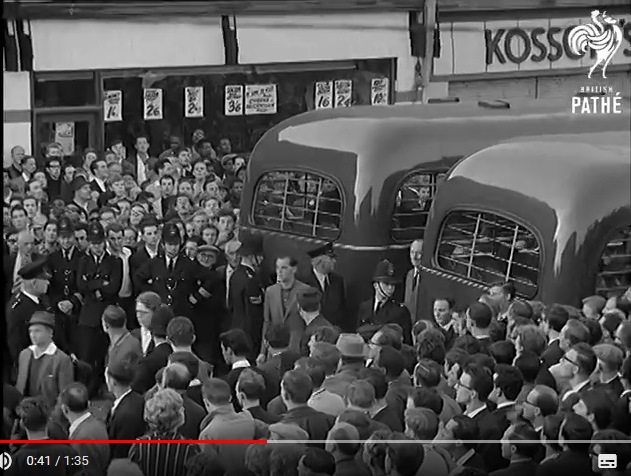 I recognise some of the shops, especially Kossoff the bakers; a cake from there was a more frequent treat. The faces are those I remember from my childhood. Not individuals but part of the scenery, familiar. They were family friends whose neighbours had lost cousins in the camps – relatives who didn’t make the move from Poland or Anatevka in 1881 or 1905. Hence their scorn for a man who had almost given succor to the enemy. Notice that although by this time the Mosleys were also speaking about the recent arrival of West Indian immigrants there isn’t a single black face to be seen.

Ridley Road then had a lot of stalls run by Jewish families (rollmops, rye bread, buttons) . Over the years the demographic changed and is changing again. Recent news was concern at the sale of illegal and unsafe bush meat. Most recent is concern about gentrification as English people move back into the area. It has changed out of all recognition in my lifetime.

Below, modern Antifaschistische Aktion, also known as Antifa on Victoria Embankment last April, refusing to move for the police. 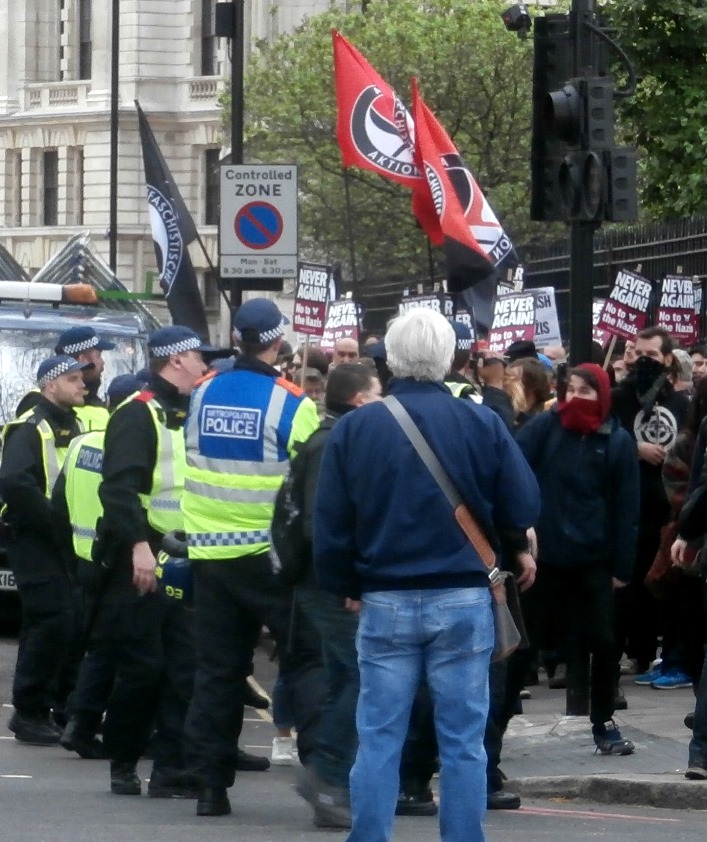 PrevTerror teacher guilty of trying to recruit ‘army of children’ for IS-inspired attacks
Canadians crave an identity, not this fluffy nonsense from TrudeauNext