We’ll be Together Again 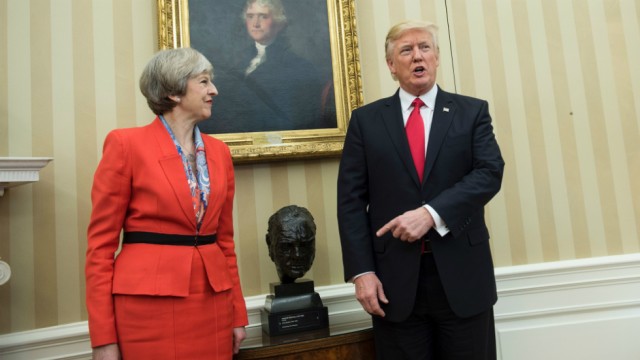 No tears, no fears, today or tomorrow. It was pleasing irony that British Prime Minister Theresa May on January 26, 2017, speaking in the city where the American colonies declared their independence from the mother country, heralded the opportunity to “renew the Special Relationship” between Britain and the United States in this new age. That renewed relationship, she argued, if enthusiasically overstated, can lead the world toward the promise of freedom and prosperity, and one of the greatest forces for progress the world has ever known,

For his part, in a symbolic gesture on his first working day, President Donald Trump brought back to the White House Oval Office the bust of Winston Churchill by Jacob Epstein that President Barack Obama had removed.  It was an indication both that the two countries share historical memories, and that they can rely on each other and stand together.

In her speech on January 26 to Republican leaders in Philadelphia, May emphasized those historic links between the two countries as well as the economic and commercial ties, and political similarities. Speaking as a “fellow Conservative” May emphasized the similarities: the qualities and attributes include liberty, dignity of work, nationhood and national self-determination, patriotism, family values, and a democratic system. The two  countries are bound by history, by family, by common interests, military, financial, cultural, and political factors.

The Special Relationship, started more than 70 years ago, indeed needs renewing. On May 11, 1953 in the House of Commons Winson Churchill, repeating what he had said to General de Gaulle on the eve of D Day in 1944, made plain British priorities. If Britain had to decide between Europe and the Open Sea it would always choose the Open Sea.

But in the post-World War II period  the US, particularly as expressed by President Dwight Eisenhower, did not regard Britain as an equal or as a great or imperial power. In a cutting remark on December 5, 1962 at West Point,  Secretary of State Dean Acheson, in debunking the Special Relaionship, remarked that Great Britain had lost an empire and had not yet found a role.

With Churchill back in the White House, the Special Relationship is bound to ignite. At the moment there does not appear to be any deep personal relationship between the incongruous pair who met in the White House on January 27, 2017. Yet it was a fruitful meeting between  the exuberant 70 year old President, real estate mogul and television personality turned successful politician, and the less flamboyant 60 year old daughter of an Anglican vicar, who has held a number of government positions and who has been married to the same man since 1980. This does not appear to resemble the warm relationship that existed between Ronald Reagan and Margaret Thatcher.

Yet sometimes opposites attract. Even with the different personalities it was meaningful that Theresa May was the first world leader to meet with the President.

Her gifts to the President suggest better things to come. Though Trump is a non-drinker, the Prime Minister gave him a quaich, a Scottish drinking cup given to clan leaders in Highland chivalry as a sign of friendship and welcome. Trump after all did have a Scottish mother, and has two Scottish golf courses.

The Special Relationship has both political and economic implications. While other issues are important, May’s immediate concern is to lay the foundation for a trade deal with the US. This is a crucial part of May’s policy to see the future of Britain, after its exit (Brexit) from the EU, as a sovereign free nation able to form free trade agreements with countries throughout the world. Discussion of a free trade agreement between the US and UK was therefore central in her policy meeting with President Trump.

The US has a formidable investment in the UK, $5 billion of corporate assets,  22 % of total US corporate assets abroad. Britain is the largest foreign direct investor in the US. About a million jobs in US are said to depend on British companies based in the US. Companies in both countries are eager to trade in the other country. Yet there is assymetry. The US remains Britain’s largest single trading partner, while the UK is only the 7th largest trading partner of the US.

For his part, Trump called Brexit a “great thing,” and asserted that Britain had taken its country back. For May, the US and the UK would lead the world together in a variety of ways. It is clear that the Special Relationship is both uneven and subject to sharp differences. Those differences on NATO, climate change, Syria, sanctions on  Russia, Iran, illustrate the problem and sometimes the inferior position of the UK. It was Jeremy Greenstock, UK Ambassador to the UN, who remarked that during the Iraq War “Britain was always sitting in the second carriage not in the engine room.”

The two leaders are not idelogical soulmates, especially on the fundamental issue of protection or free trade.  Trump appears, though it is not clear, to be a protectionist, while Prime Minister May advances  free trade and a global Britain. But the two share similar views on the fight against Islamist terrorism, defense and security cooperation. Moreover, Trump who approverd of Brexit, has in a manner exactly opposite to former President  Obama, stated that Britain would be at the front of the queue for a bilateral trade arangement.

This is significant even if it needs caution and time since no deal with can be signed until Britain formally leaves the EU. It is also important because Trump in his inaugural speech said that “from this day forward, it’s going to be only American first.” Yet the free trade deal, and more areas open to competition, is politically as well as economically important. One recent illustration of this is that UK bought US F-35 strike aircraft for UK aircraft carriers.

Of course there are issues on which the two countries will not immediately agree, but many important others in which the countries stand side by side. Both countries agree not only on the fight against ISIS but also on its ideology, Radical Islamist, behind it. And both countries agree on the importance of dealing with the problem of immigration and control of borders.

There is  a symbolic relevant reminder of the Special Relationship. Prime Minister  May sent President Trump a copy of the speech made on Christmas Eve, December 24, 1941 by Winston Churchill, whose mother was American, talking of his sense of unity and fraternal association with the United States. It would be admirable if Trump, born of a Scottish mother, reciprocates this feeling, and renews the Special Relationship in an ardent manner.