From the BBC and the Telegraph

CCTV footage showing Westminster attacker Khalid Masood’s final preparations has been shown at the inquest into his victims’ deaths. The clips show the 52-year-old buying knives and collecting the rented car he used in the March 2017 attack, which killed five people. The images were part of a compilation of videos showing Masood’s preparations ahead of his deadly attack in the capital.

The 52-year-old was in Sussex on March 21 last year, the day before he drove a hired car across Westminster Bridge, mowing down pedestrians, and stabbed a police officer with knives he’d bought from Tesco days previously. The Westminster attacker picked up fish and chips from Brighton as his last evening meal the night before his murderous rampage.

On March 9, he visited a Tesco store in Birmingham where he bought knives. 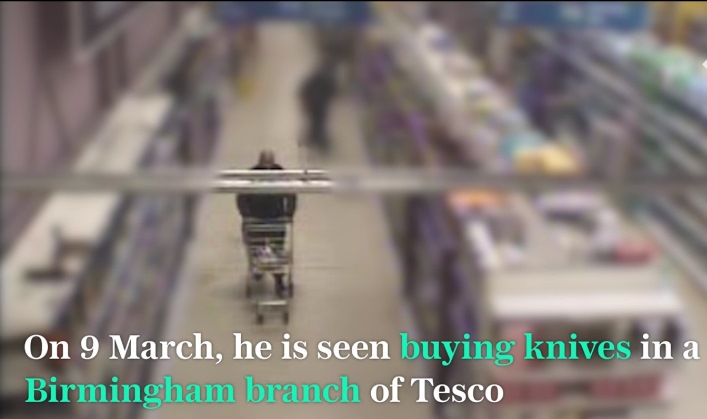 On March 16, he picked up the keys to a Hyundai Tuscan at Enterprise Rent a Car in Birmingham and drove off.

On the morning of the attack, he searched the internet for Prime Minister’s Questions before carrying out a second recce in Westminster. He returned later, using the car park at St Thomas’ Hospital before moving into the bus lane on the bridge poised for attack at 2.38pm.

The inquest heard he had previously talked to his children about Donald Trump and Theresa May, describing the “racism and rudeness” of the US president and accusing the Prime Minister of being a “liar” and “sick”.

The court was told the attack came amid a failed attempt to target Westminster with knives and a foiled plot to murder Mrs May.

The inquest into his victims’ deaths heard that during video calls to his younger children, who were living in east London while he stayed in Birmingham, he told them about dreams he had been having. Detective Chief Inspector Dan Brown told the Old Bailey: “He told them that he was going to die fighting for God.”

In the days before he ploughed into pedestrians on Westminster Bridge and stabbed Pc Keith Palmer on March 22 last year, he also searched for Birmingham Calor Gas Centre. Mr Brown accepted it was “at least possible” that he had planned to use gas as a weapon.

The inquest heard Masood drove from Birmingham to Wales to visit his mother, Janet Ajao, and stepfather on March 16 after picking up the vehicle he used to carry out the attack. Mr Brown said investigators “believe this to be what we now realise was a goodbye visit”. The detective added: “As he was leaving the house on March 17 he turned over his shoulder and said, ‘they will say I’m a terrorist. I’m not.”‘

Counter-terror officer Mr Brown said: “His mother suggested he exhibited normal boisterous behaviour, but his two brothers suggested he was a violent, disruptive person, who would not back down from a disagreement. . . She also described him as an angry person,” Mr Brown said. “She was worried he would kill someone through fighting.”

Earlier, the court heard how his mother feared he would kill someone while he was still a teenager. His failed relationships, violent criminal past, and conversion to Islam during the first of two spells in prison were laid bare in court. In May 2003, Masood plunged a carving knife through the nose of Daniel Smith, who had suggested Masood was an undercover policeman. In what was described as a “horrific incident”, the blade went through the palate of his mouth, through the tongue and into his jaw with such force the last inch of the blade broke off.

Masood claimed self-defence and was acquitted of attempted murder, wounding with intent and having a bladed weapon. The inquest heard he credited his acquittal as well as the survival of his eldest daughter, who was later involved in a serious car accident, as the “miracles” that reinforced his Muslim faith after he had converted to Islam during his first spell in prison.

Masood was born Adrian Elms and used the name Adrian Ajao, his stepfather Philip’s surname, during his school years. According to police, Masood was not the subject of any current investigations and there was “no prior intelligence about his intent to mount a terrorist attack”.He was, however, known to police and security services, with previous convictions for assaults, including GBH, possession of offensive weapons and public order offences.