What John Rich Told Us at His Party 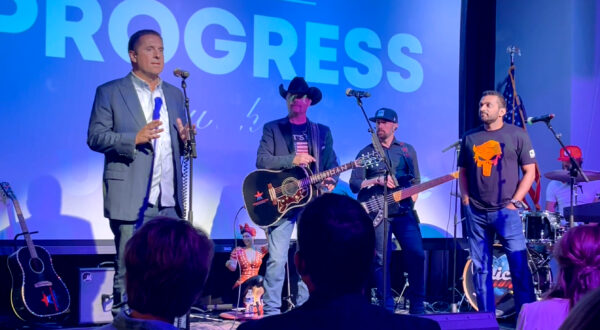 Well, the best ones I’ve been to anyway and I suspect as good as just about anybody’s for the absolute good times, friendliness, and patriotism of the atmosphere and the graciousness of the host and his wife.

I’m lucky enough to have gone to three in the four-plus years that I’ve been in Nashville.

The music, of course, is out of this world. At various parties, Rich plays, as well as a host of others from Travis Tritt to Larry Gatlin—plus Lee Greenwood singing “God Bless the U.S.A.”—and many more, including some I hadn’t heard of but should have.

His home is a perfect venue because the main room has a bandstand that rivals most nightclubs or honky-tonks, with a wall-sized window overlooking the Nashville skyline of Bob Dylan fame.

The walls are festooned with photographs of country legends, even in the elevator, as well as many of the host in the company of that deceased local deity of deities—Johnny Cash.

The swimming pool is, you guessed it, shaped like a guitar.

The whole thing makes you feel like it’s cool to be conservative these days, and it is. We’re the real counter-culture now and have been for some time. They’re basically out of it.

One of the parties I attended was a fundraiser for Sen. Marsha Blackburn (R-Tenn.), another was to welcome The Daily Wire to Nashville, and the third, on the night of Oct. 11, was to celebrate Donald Trump’s Truth Social app, the Rumble video platform, and Rich’s very recent No. 1 hit “Progress,” which was heavily promoted by those two social media outlets.

Which meant the song was sung on stage, accompanied by not just the usual band but also by former Rep. Devin Nunes—the truly gutsy then-politician and hero who first uncovered Russiagate and now runs Truth Social—and the lawyer and national security hero Kash Patel, who, as The Epoch Times subscribers know, was heavily involved in that same unmasking of left-wing criminality.

Others from The Epoch Times were in the house— Senior Editor Jan Jekielek and Lee Smith (the man who wrote the book about Nunes, Patel, and Russiagate that was made into a film) among them.

Smith was in Nashville to give a speech to the Nashville Republican Women the next day.

That speech began with Lee summarizing something quite interesting that John Rich spoke about at his party. John likes to say a few words between songs and this particular statement resonated.

Rich talked about the Americans who died in World War II, but in a slightly different manner than the way to which we are normally accustomed. He reminded us that they were very young men—18- to 20-year-olds—who had dreams of their own of all sorts, dreams that would never be fulfilled.

But these were the very people who had built this country in the first place, who made America the land of the free.

And we lost them and what they would do for our country, the companies, and businesses, small and large, they might build, their inventions, their creative work, the families they might have.

They were some of our best, dead on the battlefields in Europe and on Pacific islands.

More to the point, their deaths changed the demographics of our country and created what we are living through now.