Will Japan Change its Image? 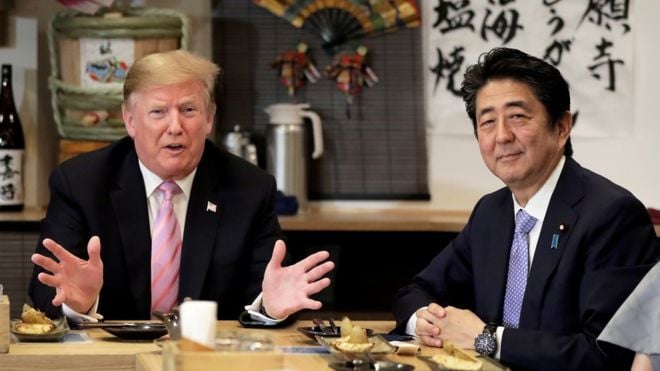 In the middle of World War II, the intrepid Humphrey Bogart in the spy film, Across the Pacific, played a secret U.S. agent trailing Sydney Greenstreet, a British spy for Japan, who is determined to blow up the Panama Canal. Today, a less than secret agent is trailing and is at war with his Japanese partner on the golf course. Rather they are allies, both concerned with similar troubling problems of China and North Korea. There are reports that the Japanese leader has proposed his American ally for the Nobel Peace Prize because of his ongoing dialogue with North Korea.

In May 2019 President Donald Trump visited Japan and played a round of golf with Japanese prime minister Shinzo Abe, and awarded the winner’s trophy to a professional Sumo wrestler, before beginning serious trade talks with Abe and celebrating their meeting with a meal of delicious salmon roe with grated and marinated sea cucumber guts. The telegenic and outspoken Abe favors a strong economy, Abeconomics with monetary policy, fiscal stimulus, deregulation, and low unemployment. For the U.S., and the Trump administration today, his significance is that he is a right wing nationalist who regularly visits the controversial Yasukuni Shrine. This is a Shinto shrine housing the souls of those involved in wars, 1867-1951. The problem is that it includes about 1,000 souls of those named to be war criminals by international military tribunals. More personally, Abe’s grandfather had been arrested, though later released, by U.S. troops on suspicion of being a war criminal.

At the time of the meeting with Trump, Abe was preparing for the election on July 21, 2019 of Japan’s upper chamber which his party Liberal Democracy Party, LDP, and its coalition partner Komeito won.

Abe, now 64 years old, is on the way to become Japan’s longest serving prime minister. He had been prime minister 2006-7, the youngest one in Japan, had resigned after his party defeat in 2007, became head of the LDP and prime minister again in 2012. Abe’s coalition won control of the lower house in 2017, winning 313 of the 465 seats, and 67 per cent of the vote. In the vote on July 21, 2019 for the upper house, the coalition won 71 of the 124 contested seats, and now has 141 of the 245 total seats. The turnout was low, perhaps because of heavy rain on polling day. More important, this number of 141 is short of two-thirds of the total, the number needed in each chamber to revise the constitution, together with approval by majority of the people voting in a referendum.

The Constitution of Japan was written when the country was occupied by Allied forces under the Supreme Command of General Douglas MacArthur after World War II to replace the military system and absolute monarchy. Much of the drafting was done by U.S. senior army under his command. The Constitution was promulgated on November 3, 1946, and came into effect on May 3, 1947. It set up a liberal democracy, a bicameral parliamentary system, both chambers directly elected, the House of Representatives and the upper House of Counselors. The PM and cabinet must be members of Parliament. The Emperor, who has studied at Harvard, has lost all power and is named as the symbol of the state and of the unity of the People, but his role is almost entirely ceremonial. The Constitution has not been amended since 1947.

The Japanese constitution is distinctive from those in other countries by its advocacy of pacifism. The preamble proclaims that “We, the Japanese people… resolved that never again shall we be visited with the horrors of war through the action of government.” The most striking clause, Article 9, is unique. There are different versions of the source of this clause, but it is most likely that it was a member of the staff of the Supreme Commander for the allied powers, and perhaps General MacArthur himself. Aspiring sincerely to an international peace based on justice and order, the Japanese people forever renounce war as a sovereign right of the nation and the threat or use of force as a means of settling international disputes. To accomplish this aim, land, sea, and air forces, as well as other war material, will never be maintained. The right of belligerency of the state will not be recognized.

However, though it does not use the word, Japan does have armed forces, is allowed Jieitai, Self Defense Forces, SDF., air, maritime, and ground. Some critics have regarded this as unconstitutional, but the ruling party does not. Three factors are pertinent. One is that Japanese troops have taken part in international peace keeping arrangements, and in a non-combat mission in Iraq, 2004-6. A second is that the U.S. has been interested in getting more cooperation from Japan in maintaining its military security. The third factor is the impact of the Japanese Supreme Court case, Sunagawa, in 1959 that upheld the right of Japan to defend allies, in this case the U.S, which has hosted a large military presence in Japan, as part of its self-defense, and the maintenance of peace and security.

Abe has insisted on the Japanese right to collective self-defense. In 2007 he set up a new defense ministry to “respond to a change in the security environment,” and make Japan more assertive on the world stage. When he took office in 2012, Abe pledged to revive the economy, and to bolster the security posture of the country. In July 2014 the government approved a policy that gave more power to JSDF, allowing it to defend allies if war was declared against them. The JSDF could provide material support for allies engaged in combat. The ban that kept the military from fighting abroad was ended, and forces could be more aligned with the militaries of other nations. In 2019 Abe proposed revision of Article 9, but he fell short of the necessary two-thirds majority in upper house needed to change the constitution. He needs to get the support of opposition members to win.

Is change in Article 9 like to come? If so, is it desirable for the U.S.? Japan is changing demographically. It has a declining population and an aging society, contrary to trends in some of the countries in the West. Turnout at elections is low ang young 20-30s. In the lower house, only 47 of 463 are women. Abe wants gender equality. 28 women were elected to the upper house on July 21, 2019, gaining 23 per cent of the total, though 16 of them came from outside Abe’s coalition parties. A record 28 per cent of candidates were women. By the 2018 gender law, political parties must try to get an equal number of male and female candidates, but no penalty as attached for non-compliance. It is no longer a question of poor butterfly.