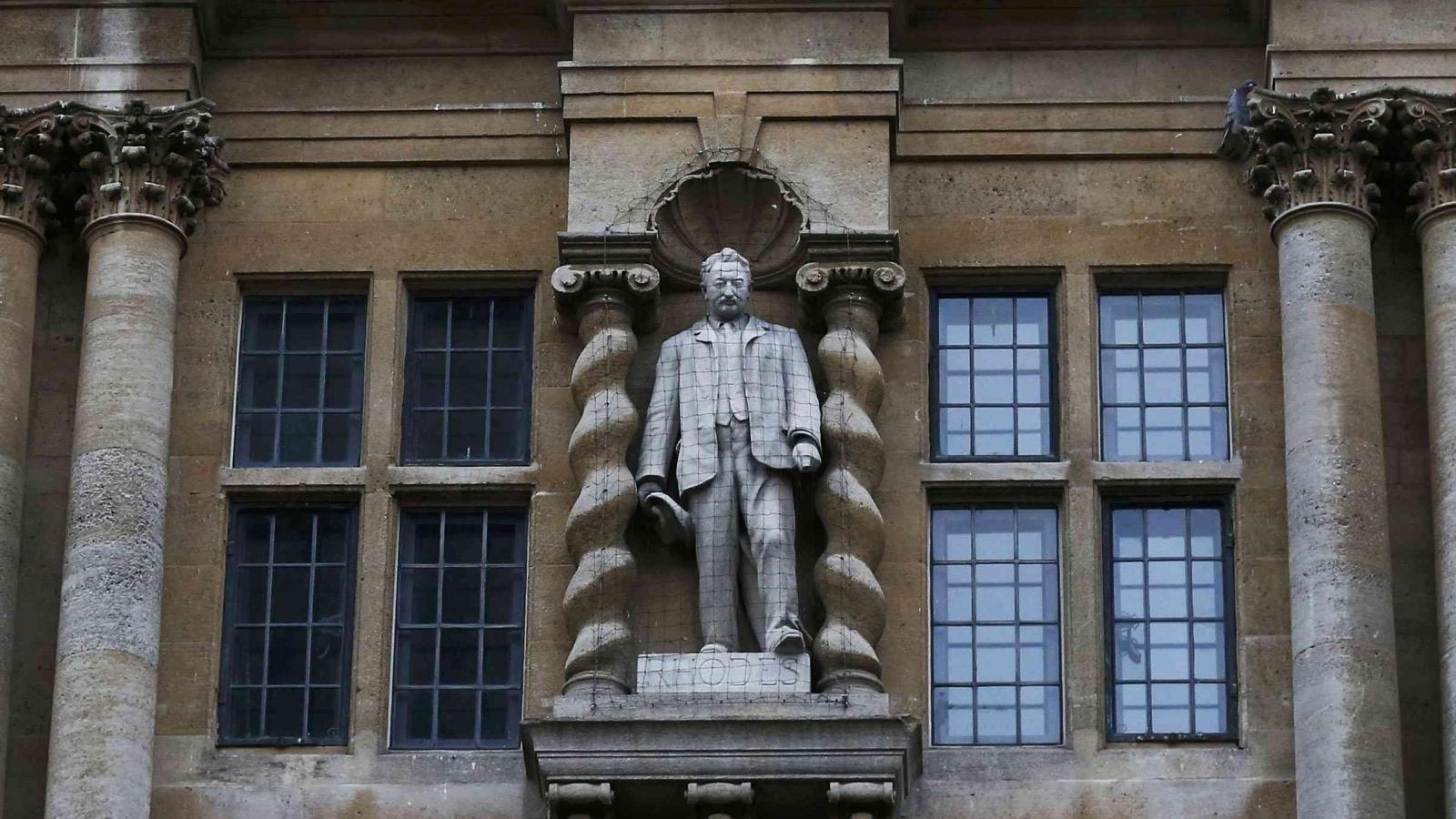 Statue of Cecil Rhodes on the facade of Oriel College, Oxford

How do we, and how should we, judge people? Should we judge them by our values today or by the context of their time? This question, always difficult to answer, has become ever more compelling with the extent and intensity of BLM protests and demonstrations against oppression, colonialism, abuse of power, slavery, and police brutality. In the United States where statues of Confederate leaders have been removed, the question has been raised of the removal of Washington and Jefferson, two slave owners. The issue has become more complicated as it has moved past one of black slavery in the U.S. to one of systemic racism of all kinds. In Britain, though Winston Churchill was not a slave owner, some seek to topple him from his iconic position as the hero of the West and superb leader, suggesting he was a racist.

Britain for some years has witnessed dispute over toppling of a well-known figure, specifically the statue of Cecil Rhodes on the facade of Oriel College, Oxford. As a colonialist, he promoted Anglo-Saxon rule in the British empire in Africa. Rhodes was the co-founder of De Beers which exploited black miners, and the prime minister of Cape Colony in 1890-96 where his policies paved the way to the development of apartheid regimes in what is now Zambia and Zimbabwe. Rhodes, also a philanthropist, had donated a large sum of money to Oriel College which established the Rhodes Scholarships at Oxford.

As a result of student protests against honoring a colonialist, Oriel voted in favor of removing the statue of Rhodes.  But alumni and others argued that if the College did so it would lose financial contributions. The College is now unsure about its decision that Rhodes will fall, and in July 2020 it set up an independent commission of inquiry, headed by Carole Souter, master of St Cross college, to examine all the issues involved.

Rhodes has not and may not fall, but Winston Churchill in Parliament Square in London almost did. The most recent controversy over the issue of colonialism has arisen as a result of a BBC program on July 21, 2020 discussing the criticisms by present-day Indians of Winston Churchill, and the charges that he, while prime minister, did not help Bengal during the Bengal Famine of 1943-44 and thus was responsible for the deaths of three million people. Churchill can’t be blamed for creating the famine, but critics hold he can be faulted for not alleviating the situation when he was able to do so. Indians however are questioning a dark chapter of British colonial history, the case of Bengal, now Bangladesh and East India.  Paradoxically, the charges have arisen at the same time as the decision to feature Churchill on the new polymer £5 pound bank note (and Jane Austen on the 10 pound note).

In his long career Churchill confronted criticism on many issues: the attack on Gallipoli in World War I; the bombing of German cities in World War II; his unwillingness to condemn Italy which attacked Abyssinia in October 1935, a country  which he held was not a worthy and equal member of the League of Nations; he condoned the Japanese invasion of Manchuria in 1931. No doubt his policy regarding Bengal is questionable, But the charge, implicit or overt, of racism about that policy is of a different nature and  is particularly disturbing.  It is even more troublesome at a moment when some officials want the “Churchill Room,” in the Treasury to be renamed. This action would erase the historic moment when Churchill on VE Day used the balcony in the room to address the thousands in the street.

Bengal had suffered a cyclone and flooding in 1942, affecting crops and infrastructure. The varying reactions about the cause of the Famine involve a variety of factors: Indian nationalism, British imperialism, colonialism, humanitarianism, and the demands for resources for the UK to fight against Nazi Germany. That complexity has consequently led to different views are voiced over the starting problem, what was the primary cause of the Bengal famine that caused the death of three million people, and the consequent starvation, malaria, malnutrition, unsanitary conditions, lack of health care. A study in 2019 by the journal Geographical Research Letters reported that the famine was not caused by a drought but by the failure of Winston Churchill’s policies. The study held that the Bengal famine was the only famine over a 46-year period that did not appear to be linked directly to soil moisture and crop failures.

There were differences of opinion within the British government and British authorities in India about the course of action to be taken in response to the famine in Bengal which remained under British rule until 1947. Officials in India wanted shipments of 80,000 tons of wheat to go to Bengal. Secretary of State for India, Leopold Amery, himself born in India, at first argued that India was overpopulated and that it was best to avoid action on Bengal, but then changed his mind, and urged action on Churchill.

Another actor was Field Marshal Wavell, appointed Viceroy of India in October 1943, who urged prompt food relief  to Bengal and ordered the army to distribute supples. Churchill in a letter to Wavell, wrote that every effort must be made, even by the diversion of shipping urgently needed for war purposes, to deal with local shortages, but he also said that  every effort should be made by Wavell to “assuage the strife between the Hindus and Moslems to induce them to work together for the common good.”

At the core of the problem for Churchill and crucial in waging World War II was the shortage of shipping and the priorities over its use. Realizing the seriousness of the Bengal famine, Churchill wrote to President F.D.Roosevelt for help, wanting transport for the 350,000 tons of wheat that Churchill had arranged to be shipped from Australia to India. On April 29, 1944 he asked F.D.R. for a special allocation of ships to carry this wheat to India since Britain lacked the ships. The American reply on June 1, 1944 was negative. Roosevelt responded that while he had the utmost sympathy for the difficulties of Churchill, the U.S. Joint Chiefs military had told him they were unable on military grounds to consent  to the diversion of shipping.

Any judgment of Churchill’s policy must take account of a number of relevant factors, showing  the conflicting  demands and priorities in Britain in World War II. Burma had fallen in March 1942 to Japan which had three results: it cut off India as Japanese ships sank an estimated 100,000 tons of Allied shipping in the Bay of Bengal; it drove hundreds of thousands of Burmese refugees into India; it cut off the flow of Burmese rice to India.

Some Indian grain had been sent to Ceylon. However, Churchill realized that relief to Bengal of wheat from Canada, which had offered to help, would take at least two months to reach India, whereas it could come from Australia in 3-4 weeks.

Above all there was the shipping problem, and ensuring supplies for vital operations. Frederick Lindemann, Lord Cherwell, the Anglo-German scientist, a close companion of Churchill, recommended that 60% of the merchant shipping operating in the Indian Ocean should be sent to the Atlantic to increase food supplies to Britain. He argued against sending any relief to Bengal.

The Battle of the Atlantic, when the Allied navies were confronted by Nazi U boats and warships was taking place from 1939 to the end of the war and peaked in 1943. The UK needed more than a million tons of imported material every week to survive. The Allies lost 3,500 merchant ships and 15 warships to German attacks. Churchill himself commented, “The only thing that really frightened me during the war was the U boat peril.”

Further resources and supplies of food were needed for the 8th Army which led by General Montgomery had invaded Italy in September 1943, and for Italian civilians.

But there are three fundamental points: the first is that Churchill was not responsible for the Bengal Famine; the second is that it is too extreme to characterize him as a racist; the third is that his views are typical of  those of the majority of Britons of his time, age, and class, interested in bringing change to the less developed countries of the world.

Churchill’s policy did not cause the Bengal Famine. His policy mistakes were not akin to the actions of Stalin in causing the famine in the Ukraine or Mao’s starvation of the Chinese people during the Great Leap Forward.

The evidence indicates he did not send aid to Bengal as quickly or as fully as desirable to save lives, and criticism of his lack of action is legitimate and desirable, but it is understandable in the context of the multiple problems of the war.  It is also undeniable that when angry he made unworthy remarks about Indians.  Churchill later regretted his intemperate words, uttered when troubled by two Indians: Gandhi with his civil disobedience campaign, hunger strike, Quit India movement, and call for “free India or die in the attempt; and Subhas Chandra  Bose and his Indian national army,  Free India Legion, formed to aid Germany in any Nazi land invasion of India.

There is no doubt that Churchill influenced by eugenics made comments unacceptable today that races are unequal. Giving one example, he said “I do not admit that a wrong has been done to the Red Indians of America or the black people of Australia by the fact that the stronger race, a higher grade race, a more worldly race has come in and taken their place.” The argument is based on the civilizing role and the development that, as both Churchill and Karl Marx argued, that Britain had brought to India. It is not to prioritize white lives over South Asian lives.

The dispute over Churchill’s action will continue. One useful reminder is his message in February 1944 to Viceroy Wavell, “I will certainly help you all I can, but  you must not ask the impossible.”