Women in the Digital Age 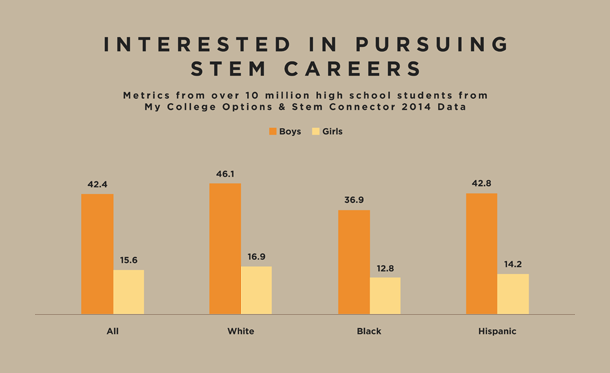 In her pioneering article of January 1971, “Why have there been no great women artists,” Linda Nochlin considered the institutional barriers that women faced in ascess in the art world, suggesting that women did not have the same degree of access to education, support, public spaces and social networks as men. Her article was central to feminist art history, but it is meaningful for consideration of institutional barriers not only in the humanities but also in other areas of life. Nowhere is this more significant than in the sciences and technology.

Historical change can be looked at in different ways, linear, circular or cyclical, but any of them can indicate advancement, if still unequal, made by modern women in many areas of life. It is unlikely that a gifted woman artist today would like Rosa Bonheur (1822-99) be compelled to wear pants rather than long skirts in order to appear in public places. On the contrary, gifted women shine and are self-assertive. A long list would include: Sheryl Sandberg, chief operating officer of Facebook, feminist icon and path breaking business woman who behaves no more morally than men in equivalent positions, Queen Elizabeth II at 90, and not yet prepared to abdicate, Nancy Pelosi, 31 years in public life and determined to be Speaker of  the House, Prime Minister Theresa May, reaching a compromise on Brexit after 18 months of wrangling and tough negotiations to reach a deal few like, Louise Arbor, former Justice of Canadian Supreme Court, prosecutor for Yugoslavan and Rwandan war crimes tribunals, including Yugoslavan president Slobodan Milosevic, now at  71 UN Special Representative for International Migration.

The list might also include individuals such as the African-American woman, the first ever, a 20 year old junior student elected November 2018 to be president of the Harvard Crimson, and the 2018 Nobel Peace Prize winner, 25 year old Nadia Murad, an Iraqi Yazidi  human rights activist living in Germany. In Spain on November 24, 2018, thousands of women marched in Madrid and other cities to oppose violence against women.

The list could also include self-assertion of non-orthodox kinds for supposed political reasons. The 27 year old model dressed bra-less under a white tank top to protest the nomination of Judge Brett Kavanaugh to the Supreme Court. In November 2018, some snowflakes, students at Somerville College, voted  21-6 to ban flying the Union Jack, a symbol of colonialism, on the Queen’s birthday. On November 23, 2018, 60 more snowflakes, women Oxford students walked in the streets wearing only lingerie in freezing temperature to protest the Irish rape trial by a 27 year old person in Cork, Ireland, who was acquitted. In the trial, a lawyer remarked that the raped 17 year old girl wearing a thong with a lace front underpants suggested she intended to or invited sex. The protesting women clarified that rape is not the result of wearing specific clothes or undergarments.

Yet, a sobering word on the capacity of women came from Heather MacDonald in WSJ on November 16, 2018 who wrote “Sorry Feminists: men are better at Scrabble.” Since the World Scrabble Championship began in 1991 all winners have been male. Does this challenge feminist theory, abilities of men and women, and raise questions?  Most important, if men dominate certain data based on abstract fields such as engineering, physics, math, is this the result of sexism, patriarchal culture or of discrimination and implicit bias in the hiring process? Here, the crucial fact is that women are significantly underrepresented in STEM, science, technology, engineering, mathematics, and are therefore not able to take full advantage of the advancing digital economy.

The reality is that inequality as well as discimination against women remains.The UN Fourth World Conference on Women held in Beijing in 1995 called for empowerment of women, removing obstacles to women, providing participation in public and private life through an equal share in economic, social, cultural, and political decision making, and equality in the family home, in the workplace, and in national and international affairs. This involve gender equality, women and men able to develop personal abilities, enjoy the same rights, resources, opportunities, and protections, and participation in all levels of decision making.

The economic facts show the need for action. A new study by a Harvard economist based on data issued by the Massachusetts Bay Transportation Authority shows that the gap in their weekly earnings can be explained by the work choices made by men and women, that choices and priorities of women account for much of the disparity in pay differences. Simply stated, women value time and flexibility more than do men, a combination of preferences  and personal life syle. Female train and bus operators earn less than men because males worked 83 more overtime hours and were more likely to accept an overtime shift on short notice. Twice as many women as men never took overtime. Males also took off fewer unpaid hours under the family medical leave program.

Parenting does makes a difference. Fathers want extra cash from overtime, mothers want time off. In the Boston case, weekly earnings gaps can explained by differences in choices of hours, schedules, and routes.

The gender gap is apparent in the wider world than Boston. Women at the largest investment banks in UK were paid at least 30% less than men. Men dominate the top trading roles, women  tend to work in junior posts or as administrators. The pay gap in J.P. Morgan’s 16,000 UK employees was 36 % as measured by median hourly pay, and was 47% in its largest investment banking unit. Similarly, Bank of America’s investment banking units paid women 47% less, while the gap in all its 6,000 UK employees was 31%. Women hold 98% of the Bank’s lower paid administrative posts. The overall issue here is how to get more women into companies and boardrooms at senior levels.

Goldman Sachs pays women 36% less in its main London unit. The Financial Times reported of its own employees a median gender gap of 19.4%. About 45% of management were women; UK national average is 18.4%.

Concerning the future for women, two basic problems are present: the digital divide, the gaps in access to information and communication technology (ICT); and the fact that in Stem, science, technology, enginering, math, women are significantly underrepresented, partly because of entrenched stereotypes. The digital gender gap will only change if women are able to adjust to changing job markets that require science. Women account for only 25% of grads in information and communications technology, and 24% in engineering, though women outnumber men in grad school.

The reality is that women are not currently able to take advantage of the digital transformation, have less access to technologies, benefitting from progress less than they could and should. Women are less likely than men to have a smartphone, and worldwide 327 million fewer women than men have smartphone access to a mobile internet. Only 10% of innovative start ups seeking venture capital investments were founded by women, though there are more women tertiary grads than men. Only 24% of the women are engineering grads. Women tend to leave STEM because of a hostile environment. Though women’s participation in inventive activities is increasing, in the world’s 20 major economies only 20% of patents are invented by women. If women are low in information communications technology, natural science and math they score high in health and welfare. This is, to use a French jibe, un coup d’epee (hitting water with a sword).

The needs are clear. Women still face discrimination and negative sterotypes in society and in the workplace. Biases must be faced. Women are, at the moment, far behind in the software world. Men are far more likely to be entrepreneurial, and at least twice as likely to be self-employed. Entrepreneurship and innovation for women should be encouraged. It is vital that more women be enrolled in STEM related studies and apprenticeships. Women should be allowed to work and to pursue a career while having a family .They spend more than twice the time that men do on unpaid care and domestic work  which restricts time for paid work. Women must have a greater access to the information and communications technology of the digital world, and the education that is transforming the world. Women must not be a victim of any digital divide.