A group of 100 diverse French intellectuals denounced Islamist totalitarianism in the newspaper Le Figaro on March 19, 2018. The following is a translation of their statement made by Clarion contributor Leslie Shaw: 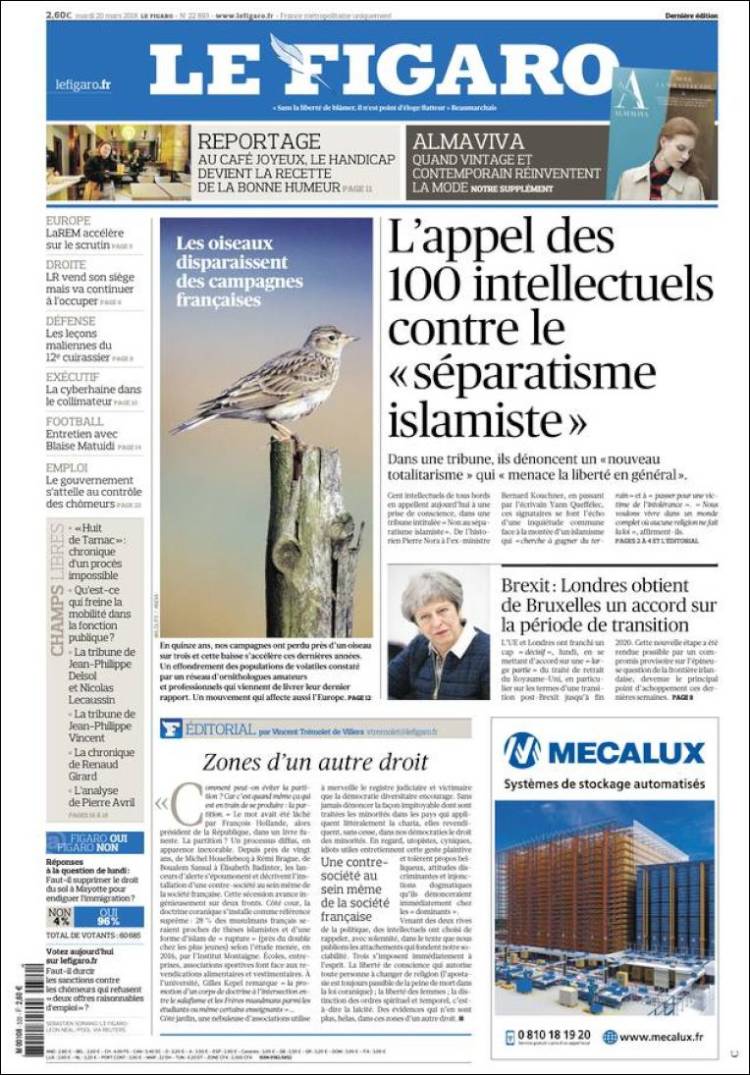 We are citizens of differing and often diametrically opposed views, who have found agreement in expressing our concern in the face of the rise of Islamism. We are united not by our affinities, but by the feeling of danger that threatens freedom in general and not just freedom of thought.

That which unites us today is more fundamental than that which will undoubtedly separate us tomorrow.

Islamist totalitarianism seeks to gain ground by every means possible and to represent itself as a victim of intolerance. This strategy was demonstrated some weeks ago when the SUD Education 93 teachers union proposed a training course that included workshops on state racism from which white people were barred.

Several of the facilitators were members or sympathizers of the CCIF (French Collective Against Islamophobia) or the Natives of the Republic party. Such examples have proliferated recently. We have thus learned that the best way to combat racism is to separate races. If this idea shocks us, it is because we are Republicans.

We also hear it said that because religions in France are trampled on by an institutionalized secularism, everything that is in a minority — in other words Islam — must be accorded a special place so that it can cease to be humiliated.

What these proclamations have in common is the idea that the only way to defend the “dominated” (the term is that of SUD Education 93) is to set them apart and grant them privileges.

Not so long ago, apartheid reigned in South Africa. Based on the segregation of blacks, it sought to exonerate itself by creating bantustans (territories set aside for black South Africans) where blacks were granted false autonomy. Fortunately this system no longer exists.

Today, a new kind of apartheid is emerging in France, a segregation in reverse thanks to which the “dominated” seek to retain their dignity by sheltering themselves from the “dominators.”

Does Islamism also seek to segregate French Muslims, whether believers or otherwise, who accept democracy and are willing to live with others? Who will decide for women who refuse to be locked away? As for others, who seemingly do not deserve to be protected, will they be held under lock and key in the camp of the “dominators”?

All of this runs counter to what has been done in France to guarantee civil peace. For centuries, the unity of the nation has been grounded in a detachment with respect to particularities that can be a source of conflict. What is known as Republican universalism does not consist in denying the existence of gender, race or religion but in defining civic space independently of them so that nobody feels excluded. How can one not see that secularism protects minority religions?

Jeopardizing secularism exposes us to a return to the wars of religion.

What purpose can this new sectarianism serve? Must it only allow the self-styled “dominated” to safeguard their purity by living amongst themselves? Is not its overall objective to assert secession from national unity, laws and mores? Is it not the expression of a real hatred towards our country and democracy?

For people to live according to the laws of their community or caste, in contempt of the laws of others, for people to be judged only by their own, is contrary to the spirit of the Republic. The French Republic was founded on the refusal to accept that private rights can be applied to specific categories of the population and on the abolition of privilege.

On the contrary, the Republic guarantees that the same law applies to each one of us. This is simply called justice.

This new separatism is advancing under concealment. It seeks to appear benign but is in reality a weapon of political and cultural conquest in the service of Islamism.

Islamism wants to set itself apart because it rejects others, including those Muslims who do not subscribe to its tenets. Islamism abhors democratic sovereignty, to which it refuses any kind of legitimacy. Islamism feels humiliated when it is not in a position of dominance.

Patrick Sommier, man of the theater