Fishing for Leave on the Thames II

Readers might remember the 16th June 2016 when a flotila of fishing boats from the pro-Brexit fisherman’s organisation Fishing for Leave sailed up the River Thames to Parliament to state their case of the damage the EU was doing/had done to the British fishing industry, and thus their desire that the country vote to leave the EU. My personal opinion is that the sight and sound of the chattering classes led by wealthy, foul mouthed European musician Bob Geldorf abusing hard-working men who do a difficult and dangerous job was the one single factor that decided the vote.

Nearly two years on and we are still being fed waffle about transition periods, and how much we owe (nothing – the EU owes us) and the blatant objective of the EU oligarcy to ‘punish’ the UK for our temerity. The latest suggestion is that the EU will maintain control of Britain’s territorial waters until the end of 2020,  which protestors described as “a potential death sentence” for the British fishing fleet. During that period the EU will have the opportunity to run the British fleet down to a level from which it may struggle to recover.

To protest, (and at the same time remind Parliament that 17 million people voted for Brexit and the shillyshallying and delaying tactics of the Remainers are trying our patience) Fishing for Leave organised a fishing boat for the Thames at very short notice today.

The original idea was that the Conservative MP Jacob Rees-Mogg (an old school type who many consider to be the only proper conservative in any prominence in the party) would join the boat and symbolically throw fish, which under EU regulations has to be discarded not sold and eaten once caught, into the Thames by Parliament, in view of the other MPs and politicians. Other Conservative MPs were expected to join him and it was thought that the numbers would only be limited to space on the boat.

Accordingly at 8 am this morning the boat R8, owned by Holladays, family fishermen and fishmongers of Whitstable on the Kent coast passed under Tower Bridge heading for Westminster. My husband was there to watch, report and take photographs. I was following the Telegraph reporters’ live stream and twitter.

The Holladay R8 came into view, but was forbidden to dock at Embankment Pier to collect the waiting MPs. 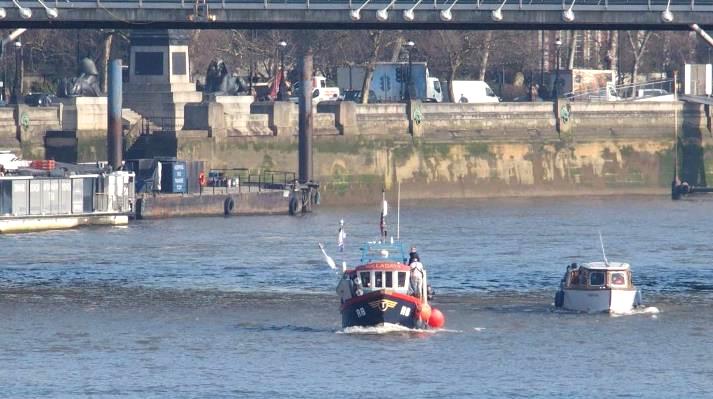 A London transport official said that they were not licensed to land. A TfL spokeswoman said: “It’s a standard procedure which we have that you have to book in advance to dock. This is to allow commuters to use regular riverboat services. You can book online on the TfL website.” So they made their respective ways to Westminster Pier, just the other side of Westminster Pier to the Houses of Parliament.

These are two pictures I took from the Telegraph live feed taken by the press helicopter. My husband is one of the small crowd on the bridge.

I can’t find yet exactly why Jacob Ree-Mogg changed his mind about boarding the boat to throw the fish himself. I am told that the other MPs agreed to conform to the orders of the Chief Whip and not join. Nigel Farage former leader of UKIP did embark and another suggestion is that the Conservatives refused to be associated with him. Whatever the reason the Conservative MPs made encouraging speech(s) about Brexit and the fishing industry and it was Nigel Farage and the leaders of Fishing for Leave who carried on with a box of surplus haddock. Caught in the eastern English Channel which would be the area covered by a boat from Whitstable in Thanet. 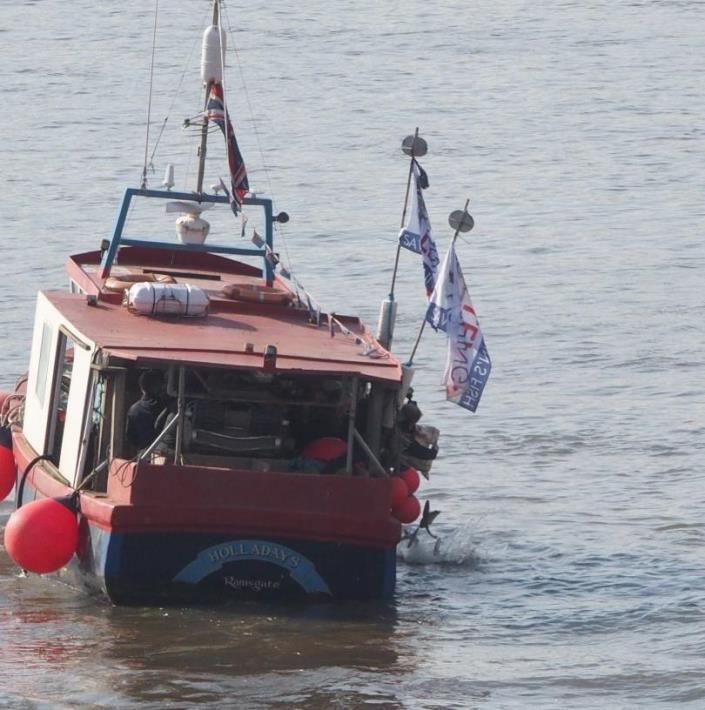 The fish went in one by one. 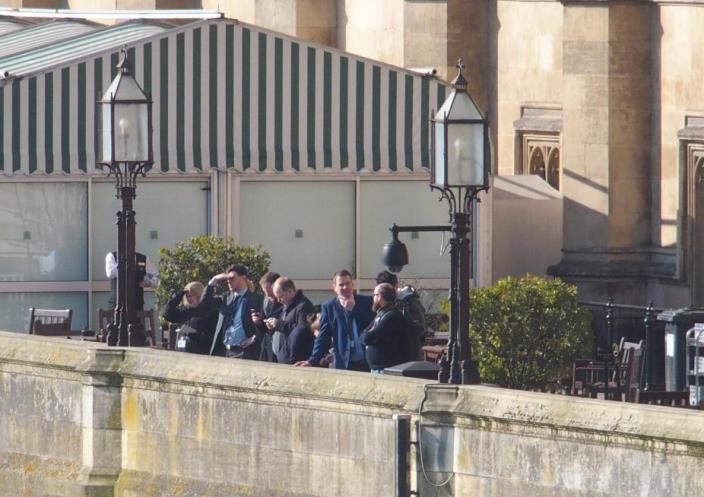 Our elected representatives had not exactly turned out in numbers to watch – maybe the time that working people are up and about is too early for them? 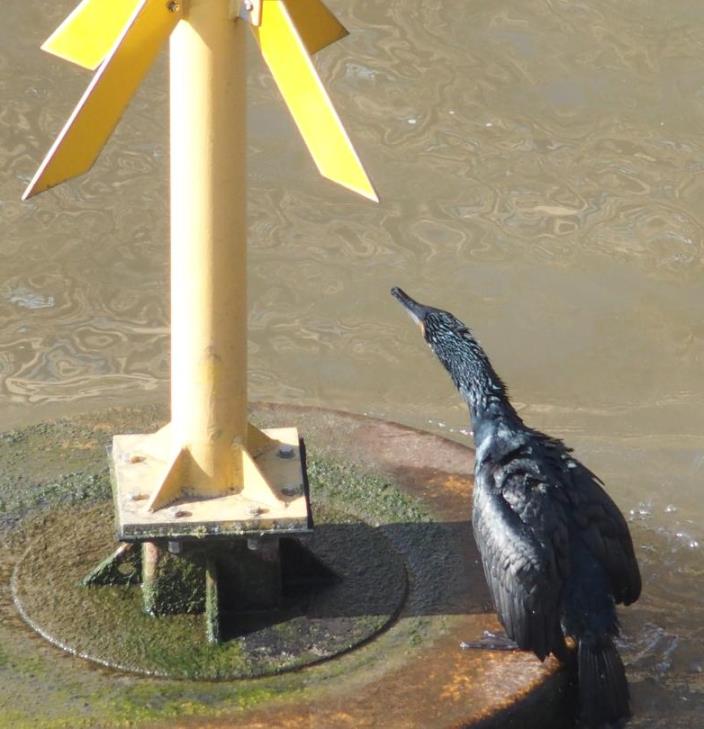 And while some have criticised the waste of good food, we are sure that it was eaten and enjoyed. This fine chap and his friends dived straight in after. 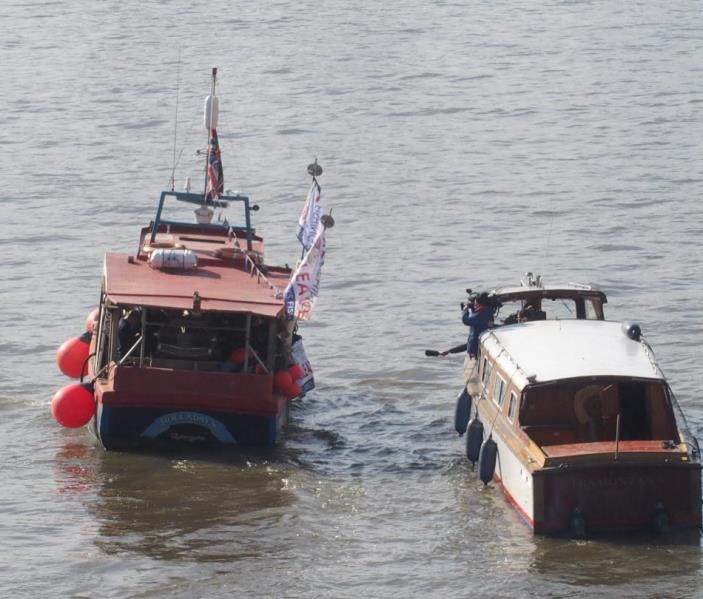 The Holliday was followed by a press boat. Then they turned round and went downstream back to the Thames Estuary and the sea.

General opinion during the hours after is that while it was an excellent opportunity for fishy puns (For Cod’s sake! – Hake news – no plaice for that kind of thing here) it was a missed opportunity for the Conservative MPs to do something to challenge Theresa May and her wet, weak handling of Brexit and everything else that ails us.

As the Telegraph’s Tim Stanley tweeted today “Fishermen are the coal miners of the sea. Dwindling economic significance, enormous emotional resonance. Represents the dignity (and personal risk) of honest labour.”

Photographs my husband and the Telegraph London 2018