At least 25 worshippers at a Sikh religious complex in the Afghan capital of Kabul were shot dead when a lone Islamic State group gunman rampaged through temple. The attacker held hostages and battled Afghan security forces as they tried to clear the building alongside British troops. 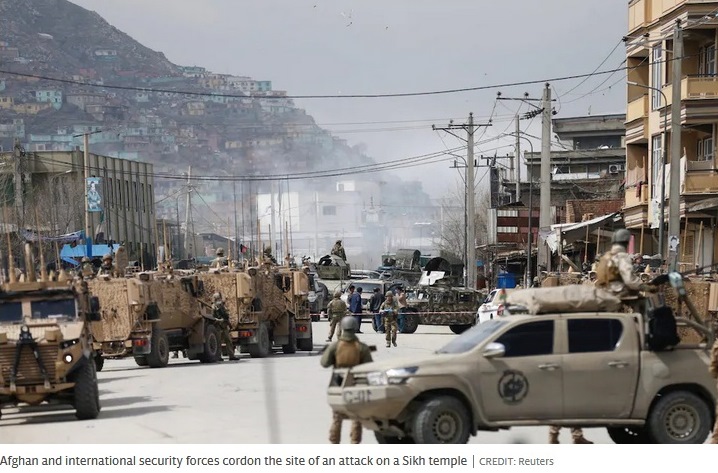 The Guardian reports a group attack

The attack lasted hours as the gunmen held hostages on Wednesday while Afghan special forces and international troops tried to end the siege in a complex that is home to many families, as well as a place of worship.

Narender Singh Khalsa, a member of parliament who represents the Sikh community, told Reuters that there were three attackers, who arrived when the buildings were full of worshippers. Islamic State, which has targeted Sikhs in Afghanistan before, said it carried out the attack.

“The attackers arrived on the stairs and started killing the women. My nephew shouted and said to me ‘Uncle, please go downstairs’, and when I tried to go downstairs, they shot my nephew in the head,” said Harander Singh, who lost several other relatives including his wife, father and daughter. “My dearest daughter was wounded, and she was repeatedly calling me ‘Dad’ before she died,” he told Reuters, through tears.

At one point some 200 people were feared to be trapped and when the incident came to an end the ministry of interior said at least 25 people inside the temple had been killed, including at least one child.

The SITE Intelligence Group, which tracks militant postings and groups, said IS claimed responsibility for the attack on the group’s Aamaq media arm.

At a Kabul hospital, Mohan Singh, who was in the Gurdwara when the attack began, said he first heard the sound of gunshots and ran for cover under a table. . . In photographs shared by the Interior Ministry, about a dozen children were seen being rushed out of the Gurdwara by Afghan special forces, many of them barefoot and crying.

Earlier, as the news of the attack broke, Taliban spokesman Zabihullah Mujahed tweeted that the Taliban were not involved.

Afghanistan’s tiny Sikh community is one of few religious minorities in the country, protected by law but frequently targeted by extremists and subject to discrimination. Thirty years ago it was 500,000 strong, but after decades of conflict and the rise of the Taliban – who ordered Sikhs to wear yellow armbands – many have sought asylum in India and the community is thought to have been reduced to about 300 families.

PrevNatural Splendor in America
Allergic to tap water, beaten by prison guards and flashbacks to torture in Libya – the absurd excuses used by Hashem Abedi in a desperate bid to scupper his murder trialNext