Allergic to tap water, beaten by prison guards and flashbacks to torture in Libya – the absurd excuses used by Hashem Abedi in a desperate bid to scupper his murder trial

I missed this last week. From the Manchester Evening News

Hashem Abedi tried everything he could to thwart British justice, deploying an extraordinary list of excuses to try to scupper his trial.

He repeatedly claimed he was physically and mentally ill, and had suffered flashbacks to his alleged torture while being held in Libya, although he was never diagnosed with any psychiatric condition.

His unfounded allegations brought the trial to a standstill on several occasions –  but ultimately couldn’t stop the terrorist being convicted of murdering 22 people and injuring hundreds of others in the bombing he helped his brother stage on May 22, 2017.

Nonetheless, those verdicts came after the families of the Manchester Arena attack victims were repeatedly subjected to the sight of the accused whingeing and whining.

His claims were kept from the jury, but the list of moans and allegations was extraordinary.

His eye-sight was poor, he said, and he struggled to read documents while he was in his cell at the high-security Belmarsh prison, he alleged via his defence team. His glasses, he whined during preliminary hearings through his lawyers, were held together with dental floss and Blu Tack and he needed to see an optician. By the time the trial proper got underway, he appeared to have a new pair of spectacles. 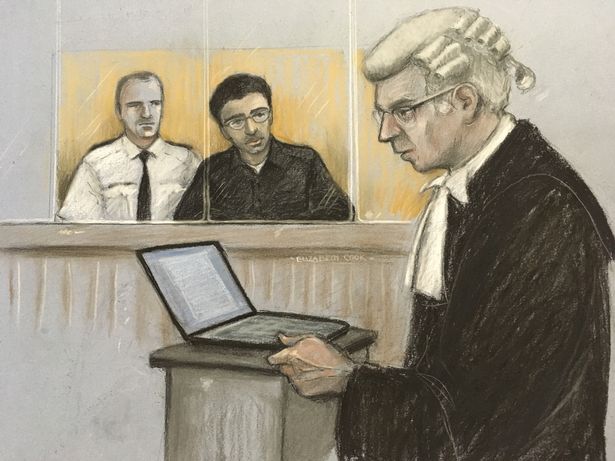 He even managed to bring the trial to a halt just two days in with the claim that he was allergic to tap water. The judge laid on bottled water for him after he alleged the chlorinated water at the Old Bailey was playing havoc with his guts.

Such fragility was hard to believe of a man who had been cooking up the highly volatile explosive TATP with sulphuric acid and hydrogen peroxide with his brother Salman in the months before the Arena atrocity.

On top of his alleged aversion to tap water, he also said he couldn’t sleep, was tired and even wanted shorter court days as he claimed he was stressed, exhausted and struggled to concentrate.

Day 16 of the trial was painful one – during the afternoon junior prosecutor Jocelyn Ledward outlined the devastating injuries inflicted on the Arena victims, not just the 22 who died but also a selection of the 92 who survived but were left with very serious life-changing injuries.

Hashem Abedi appeared completely unmoved in the dock. There was not a flicker of emotion as details of the lives and dreadful deaths of the 22 were matter-of-factly read out for the jurors.

We learned who they had come with that Monday night, where they were standing in the foyer, some of them just two metres away from the defendant’s elder brother, Salman Abedi. We learned how many pieces of shrapnel were found in their bomb-ravaged bodies and precisely how they died.

Not even the revelation that his own brother was blown into four pieces and decapitated seemed to move Hashem Abedi, who remained impassive in the dock throughout. An innocent man would have shown empathy for the suffering that had been caused.

It certainly seemed to affect the jury – they were allowed home early that day.

Was it a coincidence then that for the next two days Hashem Abedi refused to come into court? Perhaps he was irritated that the consequences of his crime had been laid bare. He effectively boycotted the rest of the trial.

Apart from two brief appearances, he didn’t show his face in court again. He remained in the Old Bailey cells while the trial continued without him. . . .“He’s just reaching the point where he’s overwhelmed by it all,” said his QC. It was a claim unlikely to wash with the families of his victims watching at the Old Bailey and at remote courtrooms in Manchester, Leeds, Newcastle and Glasgow.

(March 4) Abedi again refused to come into court, claiming through his QC that he had allegedly been beaten up by prison guards and bundled into a security van before being brought to court against his will. He had been ‘dragged’ from his cell and was punched in what his barrister Stephen Kamlish described as an ‘assault’.

The QC claimed his client had not been seen by a nurse at the prison that morning and so the decision to use force had been ‘unlawful’. Although he was now in the building, his client wouldn’t be coming into court because ‘he does not feel well enough and nor does he feel able to concentrate on matters of importance’, Mr Kamlish told the judge. His client had a ‘long list of reasons’ why he couldn’t come into court and he demanded to see the Old Bailey nurse . . . The court’s nurse saw the defendant for 45 minutes and reported back to the judge that he was, indeed, fit to attend court . . . ‘perfectly able to concentrate’.

Abedi came to the Old Bailey the following day but again refused to come up to court. The trial continued without him. The judge handed the defendant’s QC another warning that Abedi was required in the dock when the case resumed on the next day of proceedings.

Despite the clear warning, Abedi again stuck a figurative two fingers up at the judge when he refused to leave his cell on Monday, March 9. He was ‘unwell’ again. It emerged that Abedi had lost privileges at HMP Belmarsh after being involved in a bust-up in jail.

But, on March 10, as the prosecution was close to concluding its case, his QC informed the judge Hashem Abedi ‘no longer wishes to participate in the trial’. And more than that, the barrister would not be saying a word in his client’s defence. Abedi had even ordered his barrister not to make a closing speech.

It was only then the jurors were told the defendant’s absence was his own decision, not prompted by poor health.

On March 12, he decided he did want to come to the Old Bailey but again remained in the cells where he sacked his entire defence team, the second time he had done so during the case. He insisted he did not want to take part in the trial any longer and didn’t want anyone to defend him, sealing the fate which had already been set by the sheer weight of the evidence against him.