A Time for Gurus

Many in France look to a highly distinguished, if eccentric, microbiologist who touts a treatment for Covid-19. 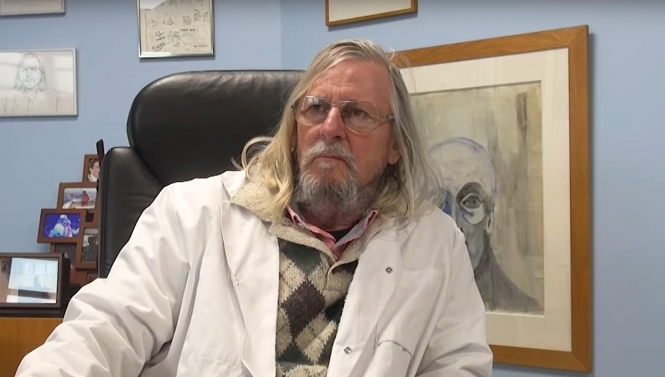 No time is more propitious for the emergence of gurus, saviors, cranks, and mavericks than during an epidemic. Excessive fear and hope hold reason in abeyance; never are straws clutched at with such avidity. It sometimes seems as if we have returned to the mentality of fourteenth-century Florence or Siena.

France has a new savior—neither its president nor the savior proclaimed as such by its former religion, but Professor Didier Raoult, an eminent microbiologist who works in Marseille. He strongly, indeed loudly, advocates the use of hydroxychloriquine and azithromycin in the treatment of patients with Covid-19. By implication, at least, President Trump believes, or believed, in him.

The professor looks the part of guru or savior. He has been described as resembling a chieftain from the pages of the Asterix comic strip, or an aging hippie who strums a guitar. His long, dank hair is in the style of a pop singer, circa 1970, and underneath his white clinician’s tunic he dresses with the studied, or provocative, casualness of the soixante-huitard, the type whose life congealed in 1968, after the events of May. But no one should mistake his scientific stature: he has discovered new pathogenic organisms that have been named after him. He is a highly respected and prolific researcher.

This makes his current position all the odder. On the basis of some laboratory evidence and a single poorly controlled study with a small number of subjects and a large number of defects, he has announced to the world that, combined with large-scale diagnostic testing, his drug regime is the solution to the epidemic.

I watched a short lecture that he gave in Marseille, available on YouTube. He drew a contrast between the ineffective response to epidemics in Marseille in the past (in 1720, the city was host to the last epidemic of bubonic plague in Europe) and the effective way that the AIDS epidemic was halted more recently—the former with isolation and quarantine, the latter with diagnosis and treatment, which, he believes, is the model for today as well.

The analogy he drew between AIDS and Covid-19 seemed to me indicative of loose thinking. The differences between the epidemics are too obvious to need enumeration. But does the legal principle applied to witnesses (abandoned, however, in most but not all jurisdictions) of falsus in uno, falsus in omnibus—false in one thing, false in all—apply to a scientist such as Raoult? Clearly not.

The defects of the trial of his drug regime to cure the illness caused by Covid-19, however, are numerous and attracted immediate criticism from scientists. Whether the untreated control patients, in Nice rather than in Marseille, where he works, were matched properly with the treated patients and were therefore true controls, is uncertain. The statistical analysis maximized the benefits—that is, it was on a per-protocol, rather than intention-to-treat, basis.

The two methods of analysis can yield quite different results. Per-protocol analysis looks at the results of those patients who take the treatment as planned. Intention-to-treat analysis looks at the results of all the patents initially selected for treatment, whether or not they complete the treatment, and for whatever reason—including death or intolerable side effects—that they may fail to do so. Obviously, it is easier to obtain a good result with the former method than the latter, though both methods have their place. But to claim potential victory over an epidemic on the basis of a single small trial, whose results have been analysed per-protocol (and even then, in controversial fashion), is premature to say the least.

Nevertheless, the professor has gained many converts: converts being the proper name for them. Thou hast conquered, O Marseillais! A few of the converts are medical, but most are lay. The professor’s hospital in Marseille has been besieged by people—standing at a distance of six feet from one another—who want the test and then, if positive, to be treated by the professor’s regime. They disregard entirely the scientific criticism that hydroxychloroquine is not an innocuous molecule and might harm without ever curing. But an intelligent layman of my acquaintance, well above the average in knowledge and intellectual ability, argues with the converts that, in the absence of alternatives, it is reasonable, indeed mandatory, to use the regime from now on.

What is needed, of course, is a proper scientific trial. With commendable speed for normally slow-moving bureaucracies, one has been started. The results should be known shortly—shortly, that is, by comparison with most trials, though in the meantime thousands will die. Raoult has said that he couldn’t care less about the trial or its results: he is going ahead anyway. He knows that his treatment works, because he has seen it for himself. As for his critics, they are simply not at his scientific level, though one of them, Françoise Barré-Sanoussi, won the Nobel Prize for her part in the discovery of HIV.

For two reasons, I hope that the professor is right, bearing in mind that he has not yet been proved wrong, either. The more important reason is that, if he is right, his treatment regime offers hope that the epidemic will be cut short. The second, more trivial, is that I would like so colorful (if arrogant) a man to prove justified in his self-confidence and to cause embarrassment to the establishment.

In the meantime, however, I shall take down my copy of Charles Mackay’s Memoirs of Extraordinary Popular Delusions and the Madness of Crowds (published in 1841) and bear it constantly in mind.

PrevIn Europe, Virus or No Virus, the Jihad Must Go on
Covid-19 sows Islamic trouble in Maldives paradiseNext