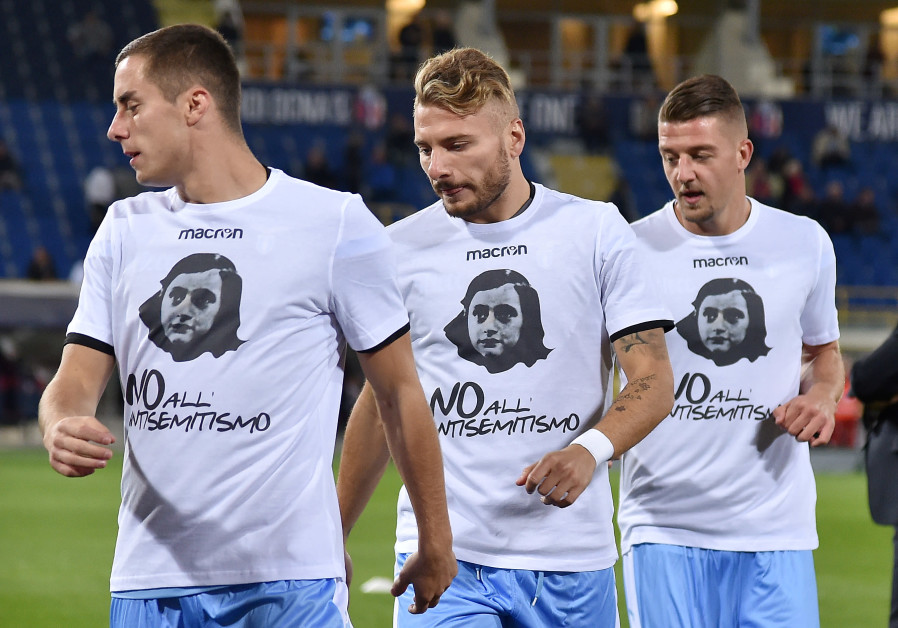 A report published in June 2015 at the Anne Frank House in Amsterdam on antisemitism in professional football (soccer) stated that this disease crossed national boundaries, though its historical origins and manifestations differed from one country to the next. Educational tools developed to fight antisemitic and other discriminatory manifestations in soccer are not used often enough. Indeed, it is bewildering that the scream, “Jews to the Gas,” is often heard today in soccer games in Rotterdam, Arnhem, Leeuwarden in the Netherlands, and London.

Soccer has never been regarded as the sport of kings, nor has it been considered simply as a courteous encounter between friendly rivals.  Often games have degenerated into clashes between passionate fan groups who express abuse and commit acts of violence or undesirable behavior against opponents. Rivalries may relate to ethnic, religious, political, national, and class differences. In his 1945 essay, The Sporting Spirit, George Orwell held that sport is an unfailing cause of ill will. International sports mimic warfare, with emotions of hatred and jealousy. They are linked to political and historical rivalries. Nevertheless, it is surprising that soccer games in a number of countries in post-World War II Europe and elsewhere have been the occasion for antisemitism as well as racist abuse and violence.

Racism has been manifested verbally against most black soccer players. However, the problem of antisemitism is more complicated than that of racism as there are few obvious reasons or physical attributes to attract discrimination and prejudice. In general, casting a rival team as Jewish is a device to ridicule or minimize it. In Poland, antisemitic fans display banners with Jewish stereotypes, such as long noses. Fans of Wisla Kratow, (white star), a traditional Polish Catholic club use antisemitic slogans to insult rival Kracovian Kratowm a supposedly Jewish club, though actually predominantly Catholic.  In a game between the two teams in 2006, eight people died even before the game began.

In Germany, antisemitic chants and symbols at games are used as insults reminiscent of Germany’s past history. Some far right groups have used  antisemitism at soccer games as a useful opportunity to spread their propaganda, and hope to recruit fans to their political cause. One of the most disconcerting devices used by antisemites in Germany and Italy is mockery of Anne Frank who died in Bergen Belsen at the age of 15. Fans of the Roman team Lazio displayed images of Anne Frank searing the jersey of rival team Roma to ridicule the team.

One interesting, if somewhat confusing, development in recent years in Europe is the declaration by some non-Jewish fans that they are Jews, probably responding in defensive fashion against antisemitic manifestations. Their actions have not only been controversial but puzzling since the clubs do not usually have any Jewish players, coaches, owners, or directors. Two well-known examples of this self-identification as a “Jewish club” are fans of Tottenham Hotspur (Spurs) in north London, and Ajax in Amsterdam, some of whose fans in response to opponents portray themselves as “Joden” or “Superjoden.”

The Spurs have had a long rivalry with Arsenal, another north London club, which they consider their main rivalry, though Arsenal by contrast considers Manchester United as its chief enemy. From about the late 1950s, Spurs has been referred to as a Jewish team and its members and supporters are called “Yids” by opponents. The word Yid is derived from the Yiddish word for Jew, but its use in English is derogatory and is usually regarded as offensive. With the increase of antisemitic incidents in the 1970s and 1980s, some Spurs fans, giving themselves an honorary title, defined themselves as a “Yid Army.”

In London antisemitism has been manifested in the stadiums of Chelsea and West Ham, a team in east London, where fans have sung songs praising Adolf Hitler and have given the Nazi salute.

In 2017 a West Ham supporter was convicted for telling a Jewish fan to “stick you head in the oven like the Jew you are.” He escaped with light punishment, with a 18 month suspended sentence and small fine,

On December 13, 2018, Chelsea supporters chanted antisemitic songs at a Europa League game in Belgrade against Brighton and Hove, though its owner was the former Russian oligarch Roman Abramovich who became an Israeli citizen. Again, in February 2019 Chelsea chanted similar songs at a match in Malmo. Abramovich has tried to overcome this hostlity by various proposals, including a substantial contribution to an educational exhibition on the Holocaust at the Imperial War Museum in London.

The second team identified as Jewish is Ajax in Amsterdam, a city which once had a well- established Jewish community, the Jerusalem of the West. Though the club has no particular relationship with the Jewish community nor is the club owned by Jews, some supporters wave Israeli flags and sing Hava Nagila.  Opponents of Ajax have used slogans against them such as “Jews to the gas.” Fans of other Dutch clubs such as Leeuwarden, called for Jews to be burned.

Similar remarks have been made by other teams, such as Ado Den Haag  of The Hague, the Belgian club Brugge, Vitesse, and All Boys in Buenos Aires, waving Palestinian flags. Den Haag fans were responsible  for the damaging with yellow and green paint ( the colors of Ajax) in February 2019 of the statue of De Dokwerker, Dockworker,  the Amsterdam memorial to the Holocaust, and for green swastikas painted in the streets.

Germany has witnessed several incidents. Almog Cohen, an Israeli, captain of the club Ingolstadt, based in Koepenick, Berlin, was subjected in March 2019 to messages that he be “sent to the chamber.”  Particularly notorious has been the club Borussia Dortmund  in a town that has been a center for neo-Nazism. Fans of the NWDO, national resistance Dortmund, on March 9, 2019 observed a moment’s silence at the game for a deceased fan, Thomas Haller, a dedicated Nazi and co-founder of the group called HooNaRa,  Hooligans, Nazis, racists, a group to revive Nazism.

Another troublesome German city is Chemnitz, a center of right wing AfD activity. Ultraright  fans have a slogan, Germany for the Germans, and use the name NS which is supposed to stand for new society, by ruin reality implies national socialism, Nazism.

Given this sad state of affairs in soccer, it is important that those involved with the game, individuals, clubs, football associations local and national authorities, take action, legal and educational. Sanctions should be imposed on clubs that tolerate racist and antisemitic behavior by their fans, clubs can use cameras and sound sensors in stadiums to identify individuals responsible for misbehavior. The policy of strict liability, introduced in 2005 by the Union of European Football Associations, can be enforced, making clubs accountable for the behavior if their fans. A simple starting point can be the imposition of penalties on soccer clubs and fans similar to those given by referees to players who break the rules of the game. It might be useful for soccer fans to hear, as some in Italy were, to a passage by Anne Frank, “I somehow feel that everything will change for the better, that this cruelty too shall end, that peace and tranquility will return once more.”

PrevMuslim sentenced to 10 days imprisonment for threats to behead Queen of Denmark, King of Sweden and others.
UK: That Muslim Gang Attack on Those Non-Muslim Tree SurgeonsNext