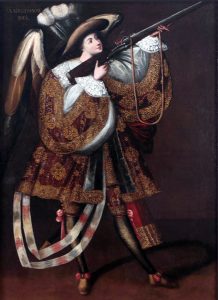 Archangel with Gun, Asiel Timor Dei, Master of Calamarca, before 1728

That rifle on the wall of the laborer’s cottage or working-class flat is the symbol of democracy.
It is our job to see that it stays there. —George Orwell

In many ways, gun arguments are similar to identity scrums. Like all “woke” arguments; facts, research, and science do not matter. The same folks who are confused about biology and sex, those who cannot or will not define a woman, are usually the same crowd that distort facts about men and firearms. So, let’s look at gun biology and pathology; some basics, some history, and hopefully, find some common sense.

To begin, any efforts to ban guns in American are absurd. That train has already left the station.

There are more guns in American homes today than there are citizens. Indeed, many households have several guns; a handgun, a rifle (aka long gun), and a shotgun. Adding to the proliferation dilemma, anti-gun hysteria and vitriol is a stimulus for ammunition and gun sales whenever the anti-gun rhetoric gets too hot.

Opinion polls about guns are mostly moot too. The only poll on guns that matters is a vote for a constitutional amendment, a poll too far by any reckoning. Second Amendment rights have been affirmed by the Supreme Court thrice now after 1,400 expensive court challenges. The latest affirmation of gun rights came just last month. Attempts to abridge Second Amendment rights exploit woke diehards and provide a cash cow for lawyers on the radical left.

The real crime of gun litigation might be billable hours.

The bottom line on gun ownership is simple. Most Americans have guns, not because they don’t feel safe, but because know they are not safe. Available data demonstrates that a criminal shooter is not likely to be caught, prosecuted, convicted, or punished. In the nation’s capital, Washington D.C., the closure rate on gun homicide is 40%. If you kill in Washington, better than even money says you will not be caught, prosecuted, or convicted.

Violent crime is gun justification; the kind of Second Amendment safety that the city, state, or federal government is unable or unwilling to provide these days. Why not ransack the local pharmacy or loot Louis Vuitton, or even blow someone away over a pair of Michael Jordan sneakers, when the scales of justice are weighted in favor of the misfits among us? Criminals, not victims, are usually the heroes of most woke social narratives these days. San Francisco, New York, and Chicago take a bow here.

Indeed, victims are the null set in our jurisprudence equation especially when African Americans are involved. When you combine the morbidity rates in black America from urban homicide, drugs, alcohol, life style choices, and abortion; the numbers amount to a kind of cultural suicide, population control by social pathology. And if you asked any beleaguered black mother to choose between a father at home or some token gun law, which do you think she would prefer?

Any solution to the gun availability problem must be proceeded by a solution to threat and public safety deficits. Unfortunately, the same liberal zealot who would restrict guns will not protect Supreme Court justices and their families from threats, intimidation, and political violence in the nation’s capital.

Good luck with safety and security on your street.

Rhetoric matters too. The trash talk and dishonesty about guns is mind boggling. Whenever some shill begins an argument with “AR-15, assault weapon, or high-capacity magazine”, you know that what follows is politicized bullshit.

Few rifles, including the AR-15, are used for murder. The weapon of choice for over 90% of homicides is a semi-automatic handgun. Rifles kill or wound at a distance; a hand gun maims in close quarters. All weapons are “assault” weapons, including ball bats, drunk drivers, drug dealers, and especially the semi-automatic handgun which kills nine of ten. And the whining about “high-capacity magazines” is claptrap too. Salvador Ramos could have done the same damage in Uvalde, Texas with a .22 caliber Ruger target pistol with just one spare clip. A clip can be ejected and replaced in the time it takes to clap your hands.

The high-capacity clip argument is bogus, unless the idea is to audit and verify clip or ammunition caches. And what would be done about all that legacy or extant firepower; nation-wide house-to-house search and seizure? All realistic remedies need to be proceeded by honest assessments of the problem. Historically, noisy demagogues, not common sense, dominate our gun arguments.

Punks who walk around or posture with AR-15s are usually adolescent TV, movie, or social media addicts. Like their woke parents, kid killers are confused about images and reality. In contrast, any seasoned street skell knows that a semi-auto hand gun is concealable, portable, and deadlier than a rifle. The virtues of a long gun are distance and accuracy. And yes, contrary to what you might hear from the hysteria lobby, a long gun like the AR 15, has more utility for hunting animals than humans. 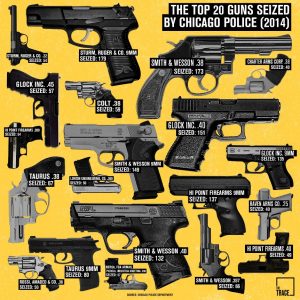 The top 20 guns seized by Chicago police in any given year include few long guns. Then again, nobody hunts deer or ducks with a Glock either.

The National Rifle Association and local police are perennial, if not ironic, boogymen for the anti-gun left in America. Never mind that the NRA used to be a valued gun education/safety resource and never mind that the police used to be our primary law enforcement shield. Both institutions have been bludgeoned into a defensive crouch. Cops will not go in harm’s way, because they know woke America does not have their backs.

Demonization of the NRA and the police, especially in urban America, leaves us with metro mean streets that are neither safe nor just. Public school punks rule Gotham, especially on public transit. And yet, we still wonder why children are not safe.

Long before Covid, public schools degenerated into custodial baby sitters where identity trumped discipline and academic achievement. Drag Queen story hour now gets better press and more podium time than biology or literacy. Between social indoctrination, social promotion, and now disease sabbaticals; we have cultivated several generations of innumerate, semiliterate, malcontents. Are we really surprised that some kids attack the very families and school houses that nourished their ignorance, confusion, resentment, hate, and anger? The best primary school is a stable home where both parents teach adult values and set boundaries long before high school. If values are not learned at home, neither the streets nor Hillary’s “village” will ever fill that void.

Is it possible that we have failed the very children we pretend to protect and educate? Salvador Ramos shot his granny in the face at home and then wasted a host of kids at Robb Elementary. Ramos’ grandfather said his grandson was upset because his wife had “asked the teen to pay his own cell phone bill.” Yet, we pretend to be puzzled about the killer’s inspiration or motives.

Is it possible that we need to worry less about “chicks with dicks” and more about reading, writing, arithmetic, discipline, values, and common sense? If anything goes at the schoolhouse; sick kids probably reason, why not the occasional blood bath?

The sponsor, better still groomer, of our blood and guts kiddie culture is Hollywood, the video gaming industry, and the legacy press. Surely, “if it bleeds it leads.” American children are now awash from birth with images of fully automatic gun mayhem and mass killing that celebrate slaughter orgies in Technicolor and surround sound. Males, ages 12-24, are the target audience for Hollywood gore. The plot of most action movies is revenge. Pubescent wankers in your basement are no more capable of separating Hollywood fiction from reality than they are of paying for the movies, cell phones, big screens, or streaming subscriptions that colonize their entitled, ego-centric minds.

Every reputable study of the fiction/reality nexus validates the link between a media culture of violence and its influence on adolescents. If media didn’t matter, then neither would advertisements of any kind. In the real world, a sanguinary “entertainment” culture has real world consequences.

If you are really worried about your child’s behavior, maybe it’s your family culture, stupid. Gratuitous violence is now as American as drug addiction and chlamydia. It’s the actors, not the instruments, that need to be reformed.

Yes, the unindicted conspirators in child slaughter are actually the deuce that produced; parents that allow their warped monsters to metastasize and kill—just for a few days notoriety, courtesy of thought leaders like the Washington Post. One headline is worth a million likes or followers. Parents are the invisible villains in every home where selfish confused egos are allowed to marinate in internet/media sewage and then make their debut as adolescent psychopaths.

Withal, there are three broad categories of gun owners; hunters, beleaguered civilians, and criminals. The first two are reasonable and responsible. The third doesn’t care about your gun laws or any law for that matter. The only people inconvenienced by gun law are the folks that Uncle Sam should want to stay armed and dangerous. See Switzerland, where every adult male is issued an automatic rifle (SG 550) to keep at home.

And finally, here’s what history, science, and research says about US legislation that bans so-called assault weapons:

It is also important to note that our analysis cannot definitively say that the assault weapons ban of 1994 caused a decrease in mass shootings, nor that its expiration in 2004 resulted in the growth of deadly incidents in the years since.

One last thought for legacy and internet media. If you can’t accept the history or science of guns, or distinguish between a vagina, a penis, and a weapon; maybe you just need to shut up and let common sense have the wheel. Then you will have more time to take your kids to the next John Wick flic—or the next drag queen show at the NY Public Library.

This essay is dedicated to Kevin Lewis (1955-2008) one of the last strategic sages at RAND Corporation, Santa Monica. Lewis coined the euphemism “Tumescent Threat” for a samizidat monograph, quickly suppressed, about America’s strategic obsession with all things phallic and explosive.

G. Murphy Donovan is a military veteran, retired now from a career in the Intelligence Community.