The Problem of Forgiveness and the Genius of Christianity 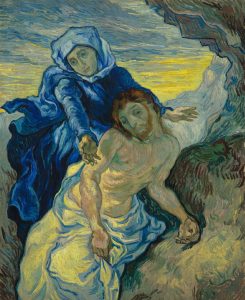 I recently enjoyed a stimulating conversation with a close friend who is a devout Christian. The subject we discussed had to do with the idea of forgiveness for one’s sins following upon confession and sincere repentance.

In the course of our debate, I took exception to the notion that another human being could appoint himself as my spiritual benefactor, like the preacher I once met at a restaurant who made the round of the tables praising God’s bounty and unctuously exhorting the diners to “enjoy” a meal he had not prepared, or the street-corner, squeegee evangelists assaulting passers-by with their pamphlets and earnest self-righteousness. I could not see how another fallible human being could fumigate my sinful nature. A priest, a rabbi, a pope is just another human being larded with pretensions in essence no different from mine.

The genius of Christianity, I argued, was that the messenger of the Lord was not a mere human being arrogantly proclaiming himself as my nominated redeemer, but a divine emissary, the son of God or God Himself—the various heresies as to His nature promulgated by sects like the Nestorians, the Docetists, the Pelagians and others notwithstanding. That was acceptable. A messiah is not an evolutionary animal. He is, so to speak, a spirit clothed in flesh and authorized to deal with our transgressions.

Where the discussion hit a snag had to do with the state of the world after the transgression had been forgiven, whether by the Lord Himself, by an earthly mediator, or by those who had been injured. Being forgiven, I contended, means that one can feel better about oneself or, as a best case, actually become a better person; the trouble is that what one has done remains done. If one hurts another, the hurt has wrought its effect. If one has killed someone, that person remains dead. The terrible truth is that there is no changing what one has done, even if one has been forgiven for it. The wound one has caused in the world can close but it may never entirely heal. The scar is perpetual.

Like any human being, I have received my share of harms; when they are deliberate or heinous, I do not forgive since forgiveness is existentially immaterial. Nor do I forgive myself for the harms I have inflicted on others; I can only struggle not to repeat them while accepting the bitter shadow of recollection. Of course, Christian theology posits a critical distinction between mortal (or deadly) sins and venial (or unintentional) sins. As the Britannica explains, mortal sins are understood as “dispositions toward sin and separation from God [and are] contrasted with venial sins, which usually involve a less serious action and are committed with less self-awareness of wrongdoing.”

Whether the sin is mortal or venial, the sinner may repent and, like the penitent thief on the cross at the right hand of the crucified Christ, expect to be taken up into heaven. As Jesus says to him, “Today shalt thou be with me in paradise.” (Luke 23: 32-43.) The scene is movingly developed in Henry Wadsworth Longfellow’s epic poem The Golden Legend, based on medieval hagiography, where the Angel of Evil Deeds, referring to the good thief, deplores that

…the soul of one,
Who by repentance
Has escaped the dreadful sentence,
Shines bright below me as I look.

The records of the repentant soul’s malefactions will be expunged from the Book of Evil Deeds. This is the standard interpretation of sincere repentance. As the Angel intones:

… I bear
The Book of Evil Deeds,
To let the breathings of the upper air
Visit its pages and erase
The records from its face!

One may be saved, the records may be blotted out, the errant soul may be pardoned. What is left out of the drama is the crisis of commission. For the harm caused by a mortal sin, and perhaps certain venial sins, cannot be effaced from the Book of Evil Deeds: its results continue both in memory and in the world regardless of the act of purification or remission. In this sense, there is no expiation. The sin has had its effect and, in one way or another, that effect continues to ramify. Its consequences and implications may never die.

The damage and suffering and loss that one has caused do not go away simply because one has repented and been forgiven. We recall Mark 1:14-15 where Jesus teaches that “The time is fulfilled, and the Kingdom of God is at hand: repent ye, and believe the gospel.” We may be saved by repentance, or feel we have been saved, but those on whose account we repent may not be so fortunate.

One can imagine for the sake of argument that the impenitent thief on the left hand of Christ had the courage of his convictions—or conviction—knowing that a profession of belief may save his soul but changes nothing for those he may have harmed, exploited, deceived, injured or murdered. One can imagine that the penitent thief plied Pascal’s wager: it’s a bet you can’t lose. Repentance may come easy in desperation. One thinks of Samuel Beckett’s play Waiting for Godot, in which the two thief-like characters discuss repentance:

The central problem is that the notion of forgiveness or redemption is based on a financial metaphor of a debt repaid, as if sin and guilt were budgetary phenomena. But this is a false metaphor, a misplaced analogy, whose influence is hard to shake. A financial debt can be repaid, or as they say in the trade, “forgiven” or “redeemed,” but a moral debt may persist indefinitely. This is an elusive and unpleasant concept. Indeed, sin, guilt and redemption form a kind of viscid ecosystem that is not easily clarified. For the evil one commits, or has committed, unlike financial malfeasance or borrowing, may be perpetual, a gash in the body of existence, and one must be ready to live with it. Outcomes do not necessarily change because one has been shriven or cleansed. Sin is not fiscal.

The effect of forgiveness is a subjective phenomenon. One is relieved of the burden of guilt, no doubt a psychological necessity for most of us. We are, so to speak, taken up into paradise, that is, we are able to live with ourselves. But the fact is that a moral debt is unsecured and unrequitable (something that cannot be returned in kind). A moral debt cannot be reimbursed in the sense that barter transactions or pecuniary issues allow, by giving back a particular thing. exchanging one item for another, or offering a sum of money for a particular good.

The canonical way of thinking about moral restitution is exemplified in the Book of Job. Job had everything taken from him—his ten children, his livestock, his wealth. As a reward for his steadfastness, though suffering an injustice, the Lord gave him double what he possessed before, as well as another ten children. Job was forgiven for questioning his God. But his ten dead children were still dead. A transgression may be forgiven, may be recompensed, but it cannot be undone or re-done. It is permanent and ineradicable and remains inscribed in the Book of Evil Deeds.

Psychologist C.J. Jung’s perspective on the indelible nature of sin is fascinating in this regard. In Answer to Job, Jung hypothesized that the Lord sacrificed His only begotten son to make restitution for His cruel treatment of Job and the slaughter of his children. But you cannot return a mortal being from the grave, the story of Lazarus notwithstanding.

In the realm of everyday life, even should a thief can give back what he has stolen, and even if the victim finds his faith in humanity thus restored, a doubt may linger deep in the unconscious. Existence has been harmed and one’s personal remission is irrelevant from a practical standpoint. True, one may be better for one’s benign contrition, but the world may be worse for one’s malign behavior. That doesn’t change. What may change is one’s propensity to commit harmful acts or one’s renewed resolve to reflect before acting—that is, to be a “good person”—which is a universal benefit. The act of forgiveness can lead to fruitful consequences but the act of commission cannot be repaid in the assumed “coin” of repentance or the promissory note of resolution.

This is why I do not wish to be forgiven for the harm I’ve done to others, since I know it will have changed nothing objectively. The genius of Christianity is life-affirming. It offers spiritual rehabilitation, but it does not alter the past or what we may call the ontology of harm. An honest conscience accepts the responsibility of guilt while at the same time vowing to do everything in one’s power to limit the mischief one inevitably causes in the world—for the sake of one’s conscience and the blessing of love. I cannot return what I have taken but I can try not to repeat the error of my ways, so that I do not need forgiveness which, in effect, repairs nothing. Forgiveness makes life livable, but alters neither the moral implications nor the irrevocable reality of one’s past actions. Sin is not marketable. Evil cannot be forgiven, it can only be renounced. Repentance may be well and good, and forgiveness a desired gift, but I do not trust them. I trust decision.

My friend, a staunch believer in the power of forgiveness, was not impressed by my reasoning. She believed that heartfelt repentance and the free act of forgiveness can vacate a moral debt. Indeed, for her, sin and salvation are not based on a financial metaphor but transcend empirical considerations. On reflection, I find I agree with her only to the extent to which a venial sin is a superficial injury that leaves no permanent mark. To call it a “sin” may even be an exaggeration. A mortal sin, on the other hand, may be forgiven but cannot be repaid or forgotten. You have to live with it. Repentance may lead to a positive change in future behavior, but it can change neither the harm that has been done nor the memory of it. The entry remains in the Book of Evil Deeds. The “sum” of what has been committed cannot be restored. It is not a debt. It is a lesion in the body of life. And we must learn to live with it.