A Trickle of Apocalypse 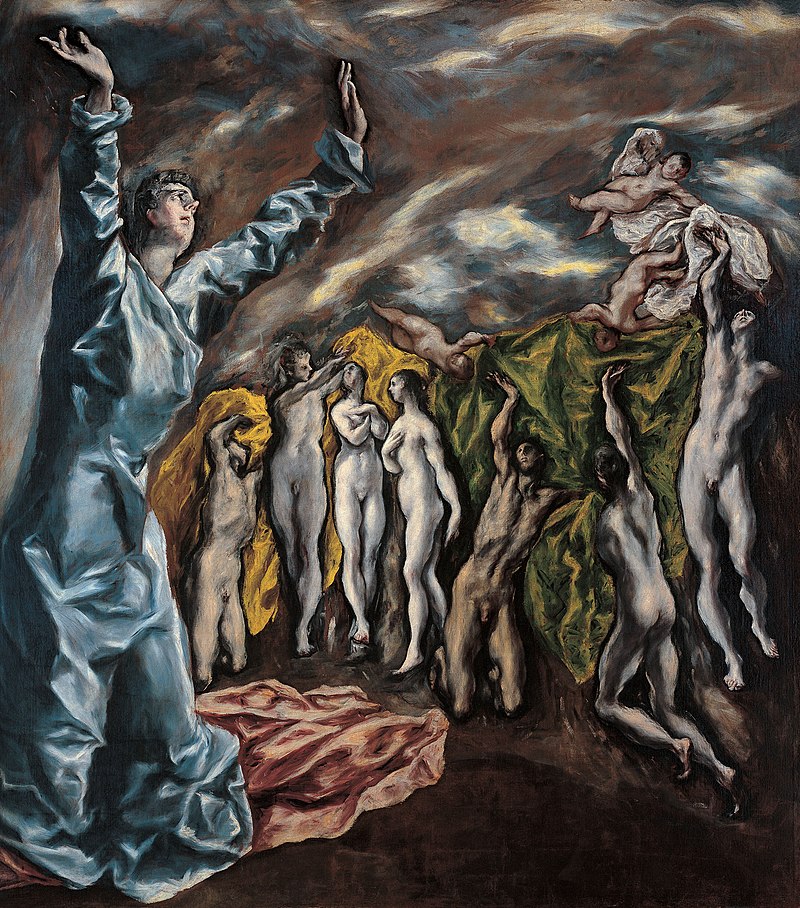 And how the silence surged softly backward,
When the plunging hoofs were gone.[1]
—Walter De La Mare, “The Listeners”

Barren Landscape of the Soul

Existential reflection—not abstract thought or science—is best equipped to capture the essence of human reality. This is a practical and life-affirming endeavor that safeguards our ability to attain contentment, even salvation, in keeping us from becoming dehumanized by a world mired in philosophical materialism.

Language is one way that people communicate with each other their ideas about human reality. Written language is the favorite child of cultural appropriation because it can be objectively transmitted. Yet it is speech that, like an unbroken stallion, limits its most poignant existential deliberations to spontaneous life. Speech remains the steward of man’s profoundest longings and aspirations.

Man’s reflection on the apocalypse is a recurring theme that finds expression in written language. Apocalypse signals the collective destruction of mankind. Still, collective mayhem and annihilation ultimately take their inspiration from the fleeting nature of individual existence.

Gilgamesh laments the death of his friend Enkidu, an innocence- draining experience in the young man’s life. The Epic of Gilgamesh is about the appropriation of finitude and the quest for immortality.

How effective is language in capturing the essence of existential and spontaneous experience? Only rarely does the moderate success of language assuage man’s existential inquietude about experience.

Existential reflection addresses the narrative of individual experience and transforms human history into a trickle of apocalypse. How many times has the world ended with a whimper, while the collective clamors for a definitive bang?

Lord Byron published “Darkness” in 1816, the “Year without a Summer.” 1816 is referred to as the year without a summer because it was uncharacteristically cold and dark.

On April 10th of the previous year, Mount Tambora, a massive volcano located on the Indonesian island of Sumbawa erupted. The eruption is estimated to have killed over 100,000 people. During the eruption the volcano spewed an enormous amount of ash and sulfur dioxide into the atmosphere. It is estimated that the eruption was responsible for cooling the Earth by over 1° Fahrenheit.

The eruption of Mount Tambora caused famine and brought about disease, especially cholera, that spread throughout the world killing hundreds of thousands of people. By the summer of 1816, Europe and other parts of the world experienced darkness, incessant rain, cold and increased cloud cover.

Today, the eruption of Mount Tambora is the domain of climatologists and archaeologist; Sumbawa and surrounding areas are called the Pompeii of the east.

Lord Byron’s apocalyptic poem “Darkness” was inspired by the eruption of Mount Tambora, even though the volcano is not acknowledged in the poem.

“Darkness” is one of the most claustrophobia-inducing works of literature. The vision of man and the world that the poem depicts qualifies as a vision of hell.

The importance of Lord Byron’s poem as a literary work transcends the eruption of Mount Tambora, for it is not the role of literature to have its wings clipped by becoming ensnared in worldly affairs.

Effective literature conveys pathos for the fragile existence of individual persons. For apocalyptic literature to be persuasive it must offer a vision of the demise of individual persons. This is one reason why we are moved by the horror of the bodies encased in stone in Pompeii; mere curiosities for modern tourists. We wonder about the life of this or that person who perished during the Mount Vesuvius eruption of 79 A.D.

Apocalyptic works can be classed as wisdom literature when they have a redeeming value. On the other hand, there exists a vast number of abysmally sophomoric works of fiction that merely glorify destruction and mayhem. The latter works may describe the apocalypse in cartoonish, cinematic color, but they are not apocalyptic.

“Darkness” entertains the possibility of human life that consumes itself in well-justified fear. The poem begins with the frightening thought: what happens to man if the sun is extinguished? Part of the horror conveyed by this possibility is that no person in recorded history has lived without sunlight. The narrator tells the reader that his vision in “Darkness” is not a dream.

Darkness engulfs the Earth. Every day is like the one before, oppressive cold and sunless: “All hearts were chill’d into selfish prayer for light.”[2]

Dwelling places are burned down to be used as beacons, cities are destroyed and people gather “round their blazing homes.” People despair and lament the loss of their former world. Their new form of life makes them slaves of infernal darkness. Animals shriek in fear and birds cannot fly due to disorientation: “All earth was but one thought—and that was death.”[3]

As famine ensues, the earth becomes riddled with unburied human bones. The world has turned frigid, seasonless, “herbless, treeless, manless, lifeless—a lump of death—a chaos of hard clay.” The absence of sunlight on Earth makes the moon expire into darkness. Clouds perish. The poem ends with darkness becoming the universe.

“The Second Coming” is a poem of moral collapse and the anarchy that moral bankruptcy unleashes upon the world. The widening gyre, a colossal whirlwind that makes the falconer lose control of his otherwise obedient and majestic falcon, becomes the dominant metaphor of moral-spiritual atrophy.

The title of the poem is evocative of the second coming of Christ as redeemer and savior of the world. Yet this is not what Yeats means by second coming. Or, is it?  While the latter interpretation has merit, closer inspection of the work reveals meaning that lazy readings of the poem miss.

The second coming in the poem elicits a second time around of human misery and terrors of “the blood-dimmed tide,” which hitherto has been kept in check by Christian values. The ominous tide of encroaching anarchy drowns virtue and innocence. One key to the veracity of the latter is the line, “Surely some revelation is at hand?[4]

It is true that some of Yeats’ imagery in “The Second Coming” is taken from esoteric and occult sources. For instance, Spiritus Mundi is Yeats’ notion of mankind’s alleged collective soul and the source of poetic inspiration for many pagans. Spiritus Mundi is symbolic of pent-up collective energy that will eventually burst into history.

Yeats is vague about the meaning of “The Second Coming.” This is common in imaginative writers who cherish not becoming an open book to their readers. This is another way in which written language fails to be exhaustive, what Jorge Luis Borges means by “writing between the lines.”

“The Second Coming” is clearly apocalyptic. The poem depicts human history as cyclical, not linear. History is played out in concentric circles, spirals that recoil into each other; creative ages destroyed by maleficent values, which in turn call for a corrective…on and on.

Man’s inability to settle on and execute the order of human reality continually punishes us for our stupidity. “The center cannot hold” conveys a widening collapse of order at every level, especially moral and spiritual.

Because the center cannot hold, anarchy fills in the vacuum of truth and goodness. Virtue is trampled, as “the ceremony of innocence is drowned.” The beliefs and standards that once held man’s destructive bent in check become impotent.

“Darkness” and “The Second Coming” were written after a calamitous event. Yeats’ poem was written after World War I. While this may serve as historical reference, nowhere in the poem does the narrator mention the war.

The consumption of innocence by moral corruption has the dual effect of destroying the righteous, which the poem describes as “the best” —while giving free rein to “the worst” —who are “full of passionate intensity.”

Yeats suggests that modernity has intensified the worst aspects of man. The worst have discovered innovative and modern ways to exercise moral corruption upon the unsuspecting.

Given the moral and spiritual bankruptcy of modernity that the poem describes, the “center cannot hold.” Yeats describes a time of “passionate intensity” when vileness is afoot as the scourge of humanity.

The second half of the poem suggests that the longer the second coming takes to be realized, the greater the horrors that man will face.

Yeats advances the idea that the moral vacuum that is modernity will be filled by non-Christian values of a beast that “Slouches towards Bethlehem to be born.”

PrevRebecca West and the Flowers of Evil
Enough is EnoughNext