Afternoon Tea in Wales: A Memoir 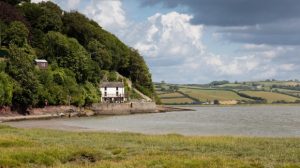 For me it would have been enough to go to the road or lane, stand at a discreet distance from the house, and silently pay my considerable respects.

I needed to go to the town’s pub, though, for an address or locale.   Impossible to enter or leave unnoticed.   Any stranger was conspicuous in so small a town.

A burly, deep-voiced proprietary man accompanied me independent of consent and finally stopped at a door, rapped on it, tried to make himself heard.  “This young lady has come all the way from America.  She likes your son’s work.  It brought her to Laugharne.”

I was thoroughly drenched, grateful to relinquish my unlined summer raincoat; the gear was no match for that inclement August afternoon.  My sneakers, hours before, had ceased to be protective.   It was just after college—my first and not quite thoroughly prepared journey abroad.

Mrs. Thomas seems gently amused that this American is not efficiently equipped for the weather—a distinct technical failure.  But she is relieved that there is no camera.

Soon we are each seated in a deep chair across from one another.

The tea is strong, its warm sustaining sweetness exactly right.

A brief silence.  What could I find to say to the mother of the author of “Do Not Go Gentle,”  “Under Milkwood”, “A Child’s Christmas in Wales,” “And Death Shall Have No Dominion”?

There was little time to ponder.  The diminutive, white haired lady had her own necessity—urgent.

“Until he went to America, my son took no strong spirits.  Only beer.  What I heard about his life in America cannot be true.  My son was good.”

Mrs. Thomas spoke just a little further.  It seemed she was endowing me with a mission I could not possibly fulfill: to alter and repair before the world her dead son’s unjustly tarnished reputation—to re-instate his character.  She seemed suddenly fragile after the strain of summoning strength—which I’d guess had once been considerable—for her message.  We drank our tea in peaceful, amicable silence.

“Is there anything I can get for you, send to you from America?”  There was.  Another American visitor had given her a good ballpoint pen.  “I like it very much, but can’t find the refills here.”  She showed me what she meant.  “Yes, I think I can find them.”  She wrote her mailing address.

I tried not to register a mute sorrow towards the hoped-for repair I could never accomplish.

It seemed to hold no interest for her that it was her son’s poems, independent of sobriety and its eventual fatal lapse,  that brought visitors from afar to her door.

I thanked her for her hospitality and the very welcome tea.

From America I sent a plentiful supply of the pen refills.  I never was sure if they reached her in time.  She died before the end of that year.

For some months I felt, almost heard, the intensity of her message:

“He most assuredly was.”