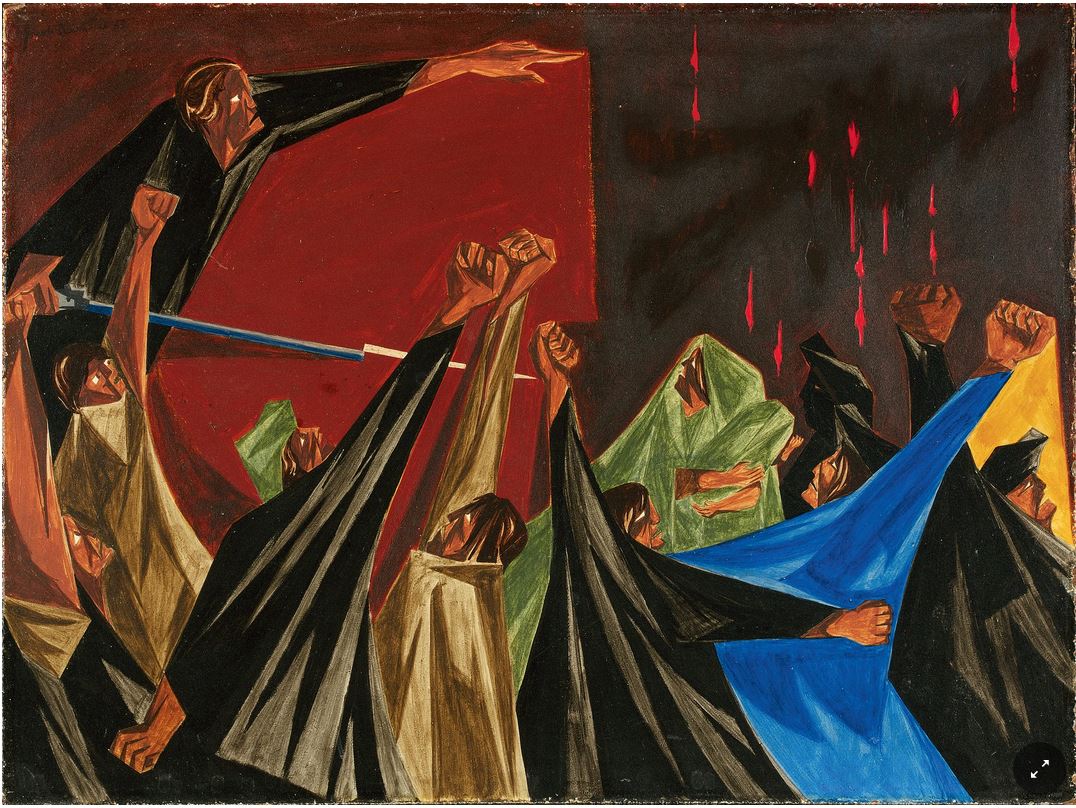 The trespassing of the Capitol on January 6 has been laughably labeled as an “insurrection” by leftists, rinos, and the hivemind that is called the media. CNN’s Anderson Cooper, with a straight face, even referred it as the equivalent of the Bosnian and Rwandan genocides.

Had it been a true insurrection, the majority of the people swarming into their building would have actually been carrying weapons, they would have overwhelmed and killed all the police and they would have exited their building carrying the politicians’ heads on pikes. Of that you can be sure. In reality, the trespassers had not one weapon and, comparably, there was minimal damage (they didn’t even walk away with a big screen TV like BLM/Antifa).

Nonetheless, the incident sent a cold shiver down the backs of the ruling class (which includes the media). And well it should. The peasants were revolting! How dare they interrupt their betters! How dare they enter where only the privileged may enter! The peasants should have let their betters, their overlords, to carry on the business of ruining the country without attempting to interject themselves into the process. Exactly who do those voters thought they were, anyway? What the peasants should have done is carry on with their little futile festival, then go back home and resume the routine of being squeezed for every penny they have, and every two or four years go through the charade of voting and pretending that this is their country.

Instead, what occurred was that President Trump had urged his listeners to peacefully go to the Capitol and let their voices be heard regarding the voter fraud (go to YouTube—which routinely engages in censorship—and hear his speech chopped up so that it seems that he encouraged a riot). What transpired then was a spontaneous uprising whereby the people wanted to tell the politicians what they thought and felt (when was the last time that any of the ruling class met with an ordinary citizen?). The politicians, however, scurried away like rats in fear that they would have to answer to the people instead of to each other, the lobbyists and the media hivemind. The prospect of giving an account of themselves to citizens was just too horrible to contemplate.

And, in truth, the people were angry. Nay, they were furious. They had witnessed an election that, for once, they had a heavy stake on blatantly taken away from them by in-your-face voter fraud, as the media hivemind repeated day after day (and continue to do so), “Move along. No voter fraud here. It’s a lie. Move along. Nothing to see here. Move along, move along.” The media assured us and we, the citizens, are supposed to believe that an incoherent, senile, white racist hiding in his basement throughout the campaign who could only muster a hundred people in his rallies had, nevertheless, legally gathered more votes than Barack Obama.

To our elites, the voicing that there was voter fraud was an intolerable, unforgivable, affront from people who should know to know their place.

Some of the people realized that, although they have been told for all of their lives that they have control of the country, that it is their country, the fact of the matter is that they have no influence whatsoever, no say so, on how the country is being (mis)managed. The most that they have, the only thing that they have, is one day out of every four years when they can pick a candidate in an election (and before Trump, the candidates were indistinguishable from each other). And in 2020, even that was taken away from them.

So they were angry.

If that was not enough, many had lost their jobs and all of their earnings, in lockdowns implemented by Democrats for the purpose of tanking the economy so that they, and the media hivemind, could blame it on Trump—just as they had previously hoped for a recession for the very same purpose. Store by store, gym by gym, restaurant by restaurant, bar by bar, theater by theater, all closed while the ruling class—the journalists and the politicians—kept getting fat paychecks, as did their enforcers, the cops who gave citations right and left and even jailed stubborn store owners who tried keeping their establishments open and thereby put food on their tables, all the while the ruling class telling the people that it was all for their own good, the same people that they utterly despise.

To add frosting to the cake, they learned some of the details about the stimulus package that their betters finally passed: that, in a gesture of generosity, the politicians would bestow on them $600 of their own money as compensation for Democrats imposing lockdowns that resulted in their loss of livelihood. AND in that stimulus package they sent twenty-five million dollars of the people’s money to Pakistan, ten of which went to “gender programs,” $700 million to Sudan, $250 million to Palestinians, and eleven billion dollars to African dictatorships. “Pleased that we were able to get so much done #ForThePeople in the closing days of the 116th Congress,” Pelosi said, who is a multimillionaire (and how is it that so many in Congress become multimillionaires while in office and out of office?).

But the ungrateful wretches were upset with their betters! Imagine that!

“Americans Should be Appalled by The Latest COVID Relief Bill” read one headline.

Americans were appalled; there was just nothing that they could do about it, and the politicians knew it (foreign aid, incidentally, is the way that poor people in rich countries are forced to send money to rich people in poor countries). And that is why the people were furious (yet, the Democrats blamed Trump for the “insurrection”). The wonder is that, to date, no one has done something truly violent.

And that is why, when I saw in real time the people forcing their way in, climbing up the walls of their building, determined to enter, to face their overlords, and the rats scurried away, and the media was shocked speechless as it occurred, I laughed.

I even played The Marseilles (honestly, I did).

Allow me to quote Abraham Lincoln: “Good men, men who love tranquility, who desire to abide by the laws, and enjoy their benefits, who would gladly spill their blood in the defense of their country; seeing their property destroyed; their families insulted, and their lives endangered; their persons injured; and seeing nothing in prospect that forebodes a change for the better; become tired of, and disgusted with, a Government that offers them no protection; and are not much averse to a change in which they imagine they have nothing to lose.”

Predictably, those politicians afflicted with Trump Derangement Syndrome blamed Trump, that outsider, that interloper, for the “insurrection.” Incapable of rational thinking, they first demanded that the Vice-President orchestrate a coup d’etat, then when Pence refused, they instituted impeachment procedures meant for removing a sitting president—after the president left office (some of the individuals with TDS are certifiably psychotic). By doing so, they outfarced the previous impeachment farce over a telephone call. They even falsified evidence at the impeachment trial in Congress (and you don’t think that they would stoop to voter fraud?). One Trump hater was so deranged he stated that he knew that Trump’s statement demanding peace and nonviolence really meant “be violent.” How? He just knew it. These are people who, if Trump says, “good morning,” they hear it as a call for violence. They are certifiably psychotic.

Regardless, the Democrats cannot impeach 75 million people—although they and their followers do want to send them to Communist style re-education camps. Leftists not only think of them as Nazis, white supremacists, and the other usual knee-jerk terms; they even referred to them as Hezbollah. As for Trump supporters, well, they are “terrorists.”

So, according to the Democrats, the “insurrection” happened, not because the election was stolen from the people, nor the fact that so many lost their jobs, homes and savings because of the unnecessary lockdowns by Democrats, or crippling fines, nor the fact that millions and millions of dollars were sent overseas to dictatorships, nor that censorship by leftists has become rampant in society. No. No, you see, it was Donald Trump’s fault. Really.

On the other hand, some in Italy—away from the brainwashing effect of the American media hivemind—saw the whole thing clearly.

And ever since the inauguration of the pseudopresident, the center of government has been barricaded and patrolled by troops, as in a Third World country. As one lowly plebian put it, “If you need all this to protect your inauguration from the people, maybe the f**king people didn’t f**kin’ elect you.”

There is another thing to consider. Throughout the 2019 months, the Antifa and the Black Lives Matter thugs carried out riots wherein businesses were burnt, stores looted, there was widespread vandalism and people were assaulted and murdered. Throughout the occurrence of these crimes, Democrat politicians either excused, or praised them, or encouraged them, or denied their existence (Schumer even encouraged an attack on SCOTUS and a mob attempted to invade the SCOTUS offices). Some even paid their bail if they got arrested, so they could continue their path of destruction. The same is true for the media hivemind. On the other hand, the Capitol non-insurrection had nothing comparable to the destruction by the leftist thugs, yet Democrats were shocked—yes, shocked!—at what transpired. Worse, none of them suggested taking a knee.

Armando Simón is the author of Pandemic or No Pandemic I’m Getting Married!! available on Amazon—for now.