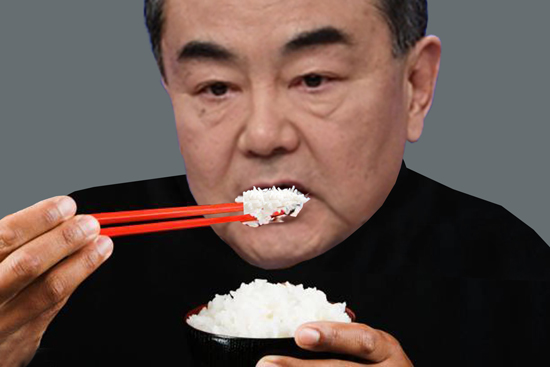 House cadre prepared for me a sufficiently China-centric breakfast of surveilled plain white rice. I insist on one thousand nine hundred and forty-nine grains per portion, a number ideally commensurate with good intestinal health and happily commemorative of history’s most important year. (The world is fast being realized that 1949 was a year more signal in global calendrics than the alleged drifting through of some Hebrew fakir 2 millennia ago.) Of course, it would not be fair to demand that she who was promoted to the position of wife to the Foreign Minister of the Republic of China and State councilor Wang Yi get the number of grains precisely correct. Therefore, I demand that she get the number of grains precisely correct. Some part of my gut is so loyal to the Party that it will involuntarily vomit up excess grainage. This, in-leagueness with CCP core values, is another way to prevent splittism. And thus, vomiting is the ideal start to the day.

Thereafter this morning was dominated by news that the Czech Republic, a landlocked dwarf barely distinguishable by satellite imaging, is seeking a gold medal in temerity. This ‘republic,’ little bigger than a party official’s first son’s dragon boat lake, has what other small nations have—politicians. (It is permissible that other countries have politicians. They are essential when the time arrives to find besuited men to press lower-statusly round Chinese officials in photographs.) But the Czech Republic doesn’t have what those other country’s politicians are increasingly aware that it economically pays to have: back-breaking respect for the China-led everything.

I pointed this out at a lectern surrounded by cameras. My statement was concluded and its contents mediated. Those words became incontrovertible fact, as per standard and agreed upon international norms of respect for the feelings of the Chinese people. What should have followed was a period of reflective silence in which the implications of my terseness reverberated through time and space like a singularity. Instead, like the whinnying of a child trapped a kilometer away at the back of a sequence of caves, there was a “response.” I indulged the individual—your concept not mine—with the following devastation:

When I heard that Milos Vystricil, President of the Czech Republic’s Senate, would address T*****’s ‘national legislature,’ my first thought was that we have to ban the use of Mongolian in public schools. You cannot strike the body politic of a Big Country like China (let us fantasize for a moment that there is any such ‘like’) without forcing air out into another part of the world. So I was privately grateful that this mittel European community organizer was indirectly promoting Mandarin as the language of sole use in the nation’s straw hat to the north. My next reaction was of the hurt and insult felt by 1.4 billion social credit card holders. A note has been made of their names and addresses. [End of statement]

I shared a small, intimate 40 course state banquet with House Cadre and Bowing Thing at a restaurant known in Zhongnanhai for its loyalty to core party values. Loyalty to Core Party Values specializes in young duck. The taste of young and aged duck is indistinguishable to all but the most Global Times of palates. However, the Politburo Standing Committee has issued an order to slaughter any animal with duckish Chinese characteristics at adolescence, lest it develop a splittist quack.

At informal banquets I like to keep conversation light. What I also like to do is to force others to keep conversation light. So I spent the first 4 hours soberly critiquing Canberra’s doomed anti-China hysteria. I declared amusingly but with venomous severity that any nation whose name can be shortened to serve as a soubriquet for its people is not one to be taken seriously. House Cadre submitted written permission to express agreement through laughter. I granted Party consent according to marriage clause 61. (a) in which she who is married to Foreign Minister of the People’s Republic of China and State councilor Wang Yi agrees to only ever exhibit mirth silently. I, Bowing Thing, and the attendant army of waiters paused and watched inviolably as House Cadre arranged her features into a crumpled state which they tell me is called a smile. I then began the wave of nodding that brought the entire ‘joke’ episode to a dignified end. The waiters’ names were noted.

“Canberra is fatally mistaken,” I dictated. I always use a nation’s capital metonymically. It subtracts culture and history from a country but in a non-interfering way. I then went into long, detailed one sentence about Canberra’s thoroughgoing economic dependence on China.

“Aussies” —it’s a word whose sibilance lends itself to being spat out— “have not suffered a recession since 1991. If they create a fissure, it is we who will press our thumb on the wound to make the pain felt.” Wishing to ensure my audience (history) not misread the use of a metaphor for ‘humanism,’ I dabbed the corners of my mouth with a Party-approved napkin and added, “Win-win.”

I paid the bill by raising a single eyebrow and the Party party left in majority agreement that we live in a post-western world but that China is still a developing country that should be awarded assistance and concessions in all areas of international trade and relations concurrent with ovations of respect.

A fleet of limousines then transported the three of us to my favorite little drinking hole in Beijing, Black Cat, White Cat. Black Cat, White Cat also has a long history of loyalty to core Party values but that name was already taken. Its owner, a Mr Chen, has been intolerably accused of poisoning enemies of the Party, a rumour mongered by China’s enemies to explain how the proprietor of a 50 square metre tea shop could have amassed a $400 million dollar fortune. In truth, Mr Chen is just another example of an ordinary Chinese being lifted out of poverty.

I began to light heartedly discourse on policy tendencies with regard to Central Asia when Bowing Thing brought grave communication. He had with him a copy of a sentence found in the English edition of the Global Times.

Wang made the remarks in response to the question of so-called China’s involvement in US internal affairs when meeting the press with Russian Foreign Minister Sergei Lavrov in Moscow on Friday.

I commanded all imbibing to effectively cease. I stood up to have my things gathered. I was ushered to the back of the state limousine. A series of steps was then set in motion that would ensure such grammatical backsliding never again happen. House Cadre and Bowing Thing posed their notebooks in expectant fashion.

“Find him. Then call Mr Chen at Black Cat, White Cat. Advise him that he will be entertaining one of the Party’s “special guests” tomorrow evening. It is imperative that you use the phrase “special guest.” That is all.”

After a pause of tremendous pregnancy, Bowing Thing requested that I allow my evening’s estimations on the questions of Australia to be collected, printed, and released in book form the following morning to be read in schools nationwide instead of giving the children breakfast. I poohed the idea. After all, I didn’t wish to spoil what had been a thoroughly enjoyable small, intimate six-and-a-half-hour monologue by introducing a ‘working element’. Those waiters’ names were once again noted. [End of statement]

The current friction between the People’s Republic and a few rogue anti-China nations that comprise the rest of the world reminds me of a spat which occurred during the hyperplaning phase of Chonqing’s economic development.

A liberal reformer called Hu incurred the ire of a staunch party conservative called He. Hu was brash, charismatic., spoke English and danced. He—He, not Hu—was loyal, core, spoke Russian, and marched. Hu wore western sports jackets and yellow ties. He wore Mao suits inviolably buttoned up. Both were ‘princelings’ whose fathers had been so core that they had been nearly beaten to death in the cultural revolution. Finally, they had been released and re-educated back to core-ness, gaining serviceable limb function capability which was noted.

Hu was mayor of Chongqing, meaning he was purchase manager for 15 million people whose dignity might be insulted at any moment. He—He—disparagingly spoke of Hu as ‘Mr Billions’, this many years before the Showtime drama cataloguing the rank US hypocrisy embodied in the personage of ginger hedgie, Robert Axelrod.

He, whose Party administrative managerial role lacked commensurate checkbook inviolability, envied how he—Hu—posed in the page 1 reflected glory of yet another sea bridge constructed inside 9 days as if he—Hu—had built it all by himself. The hungry mouths, thought He, will always be more enraptured by a man who manages physical rather than Party infrastructure. This is only one of 1.4 billion other reasons they will never be trusted with a vote.

One day, his—He’s—pride could take it no more. He—He— petitioned Beijing querying how a simple 8 mountain tunnel—built as a parallel back up to the original tunnel bored through the same 8 mountains— had gone 2.3 billion yuan over budget. Everyone he—Hu— knew seemed to be driving around Chongqing in brand new cobalt green Porsche convertibles with Chinese characteristics.

When he—Hu—learned of the petition, he—Hu—employed easy women to snare him—He—into acts of the flesh which subtracted dignity from otherwise positive regional headline economic figures. Hu sternly hand-delivered these glossy images to the Politburo Standing Committee secretariat while uncharacteristically wearing a Mao suit and an expression which was recorded as the most suffocatingly haughty seen in Beijing that year. He—He—was removed and re-re-re-educated in a room with no books or heat but constant artificial light. Brash, handsome, charismatic Hu now saw a clear road ahead to status as one of the 8 immortals.

However, Party financial investigators stood outside the three-storey banqueting hall he—Hu—had hired to celebrate and at the sound of the first champagne corks, they entered in win-win formation to serve him—Hu—with an audit. Today, he—Hu—is being re-re-re-educated in a room with no books or heat but constant artificial light next to He while the process of airbrushing their faces from the dignified chapters of modern Party history is completed.

Of course, in the current friction between the People’s Republic of China and a few rogue anti-China nations that comprise the rest of the world Hu is the United States and He is the West.