Riding Towards Us With a Vengeance 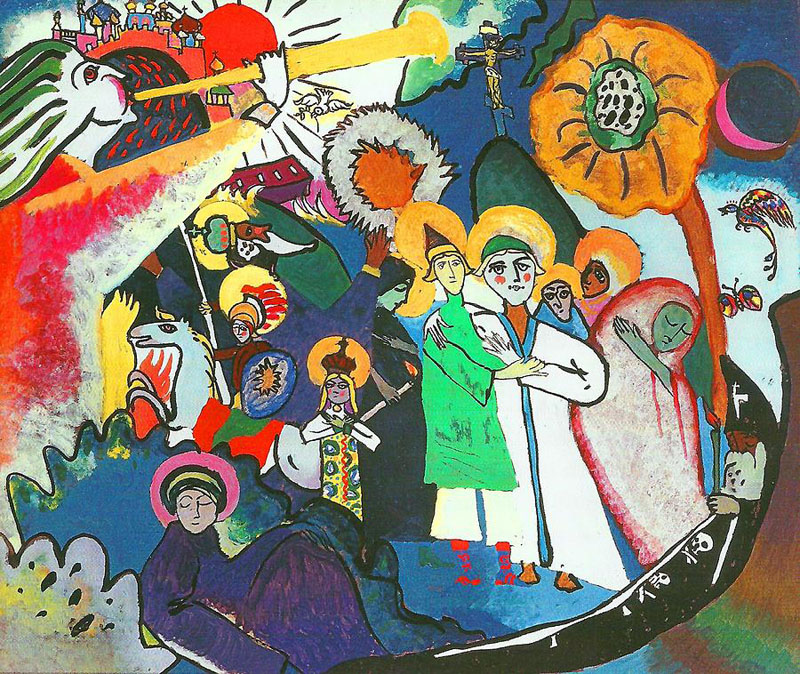 All Saints I, Wassily Kandinsky, 1911

I spent much of the last winter and the end of fall working on a project in Kenya. As I watched the response to the Wuhan virus devastate the world and then saw the streets of US cities go up in flames, my African colleagues asked me a simple question.

Why do the supporters of Black Lives Matter show such an enormous indifference to the lives of Black Africans? I have written this short piece to answer them, to connect the dots, for Black Lives Matter is simply a branch of one of the four great tyrannies trying to bring down the West and which would dominate Africa if it could. Let me explain.

The incredible and now well-documented Machiavellian behaviour of the Chinese Communist Party in their use of the Wuhan virus to weaken the West, and then pose as its medical saviour, is a piece of cynical science fiction in and of itself.

But when you look at their behaviour in a global context, they are simply one of four totalitarian challenges that now face Canada, the USA and the West and that need to be addressed, if liberal democracies are to survive in the years to come.

In Canada, one would hope that “the problem of China” will feature in the inevitable and upcoming election which will be a showdown between Justin Trudeau’s pro Chinese liberals and the more skeptical Conservatives under their new leader, Erin O’Toole. No doubt it will feature as a topic in the upcoming US election but the US media does not follow the Canadian debate which is a pity.

As we finish the second decade of the 21st century, Canada, the USA and the West are confronted by four tyrannies, each one trying to undermine personal freedom in their own countries and adjacent areas and, at the same time, doing their best to undermine freedom in our own democracies. Let us start with the most ancient.

China is one of the oldest agrarian nations in the world. It has its own distinctive national language, a sense of ethnic Han dominance, a series of religions and a Confucian ideology that argues that its leaders have the mandate of heaven, that is to say, they have the right to rule, and China has been and is expansive.

China was once a great scientific innovator (until the 15th century) and has a sense that the non-Chinese are barbarians, to be kept at bay or dominated.

Yes, you may say, but China has changed! It has industrialized, it has modernized, it has dynamic artists, musicians, film makers and its most recent industrial revolution has pulled hundreds of millions of impoverished peasants out of poverty. (At the same time, more than two million Chinese have moved to Africa, the economy there has been dominated by Chinese companies and the government has made common cause with the remaining authoritarian regimes there whose citizens want freedom. This does not help them.)

China’s leaders are still self-defined communists, self-declared collectivists, but really they are oligarchic elitists, who have reconstituted an imperial, expansive state based on hierarchy and obedience that spends much of its time and effort stealing innovations from the West and plotting against us.

The Chinese Communist Party plays dirty and they have recently taken innocent Canadians hostage when the Canadian Government tried to implement international law (usually something Canadians love to do) in the ongoing Huawei scandal. The US does not give in to this kind of blackmail and is pushing back.

Russia comes in second. And that is because, in the popular mind, we disconnect Russia from its deepest self identification—Byzantium. Before the 1917 revolution, Russia was a slowly modernizing agricultural state, ruled by a family of aristocrats who traced themselves literally and spiritually to the Byzantine Empire.

The Byzantines believed that their faith and their emperor were one and the same, and that because of this they deserved to rule the world or, as much of it as they could conquer.

As Arthur Koestler once said, “there is little difference between Czar and Commissar.” In 1917 the Bolsheviks constructed a faux, Marxist, atheist regime which “died of its own contradictions” in 1990.

Today, under their new oligarchs, the Russians have gone back to their old ways. They are now devoutly Orthodox, treat Putin like the Czar, hate the Chinese and despise the West. Personal freedom counts for nothing among. To deflect interest in the loss of freedom in Russia, the government pursues an aggressive foreign policy in places like Syria and does not oppose Iran.

When reason and science in the West were asleep from the 8th to the 11th centuries, the Islamic world—particularly Abbasid Iraq—was the centre of civilization. Philosophy, medicine and science flourished there.

But ultimately Islam’s majoritarian, theocratic tendencies destroyed its slow adoption of reason and coupled with their notion of holy war, saw its most powerful expansion in the rise of the Ottoman Empire. That empire was defeated by us, the West (including Canadian and American soldiers) in WWI and the Islamic world then became the colonial nightmare of the West.

Instead of adopting nationalism and later the universal values embedded in the treaties they have signed (human rights etc.), the gift and the curse of oil allowed newly-independent Islamic states to expand and subsequently export their theology of Jihad, with a surge of Muslim immigrants and students coming to the West (from whom so many terrorist attacks have emerged, the most dramatic being 9/11).

The institutional framework for most of this activity is, among the Shias, the state terrorists who comprise the government of Iran and, among the Sunnis, the Muslim Brotherhood, which does everything possible to inject Sharia law into western systems of jurisprudence under the umbrella of multi culturalism.

It makes no difference that the Shia and the Sunni hate each other; that’s immaterial. That hatred is superseded by their hatred of personal freedom at home and abroad. However, the strengthening of the Iranians by President Obama created a reaction against them, signified by the two latest peace treaties between Israel and Dubai and Israel and Bahrain, thanks to the unconventional and successful diplomacy of President Trump.

One could and may argue that these three tyrannies are all outside of the borders of the Anglosphere and that we have nothing to worry about. This is not the case.

Since the Marxist-influenced members of the Frankfurt School migrated from the Nazi threat in Germany in the 1920s and came to New York City, they have been successfully undermining the fundamentals of the English-speaking democracies.

The “cultural Marxist” goal is—by taking over the media and the schools—to destroy bourgeois Western Civilization and bring on the death of capitalism. The continuing riots in the streets and cities of America are inspired by this movement.

Antifa and Black Lives Matters are inspired and supported by followers of the Frankfurt School. And that is why Black Lives Matters does not care for modernizing, democratising countries such as Kenya, Ethiopia, Tanzania or Botswana; these countries have all rejected Marxism. The young people of these nations want personal freedom more than anything else. They look to us for inspiration.

In Canada, the growing nihilistic, culturally relativistic world view of the Frankfurt School has more or less successfully dominated our media, school and college systems, and indoctrinated our youth. In the US, they have taken over a majority of colleges and universities, especially in the social sciences. But some conservative holdouts remain, such as Hillsdale College and St. John’s where the Great Books are still taught. They are the enduring role models for the liberal arts, one hopes.

A tyranny that is home grown finds its natural allies in otherwise paradoxical support for radical Islam, globalization and kowtowing to China and Russia. Instead of accusing Russia of trying to undermine democracy in America, their supporters have spent the last two years accusing the President of the United States of America of colluding with authoritarian Russia. There are many (Cortez, Tlaib, Harris, etc.) who detest the Constitution.

The world has been turned upside down. We now teach our children that the West is the worst culture there is and that we and our past are the source of all the present trouble in the world. The New York Times 1619 project is the most recent and well-known example of this trend, as is Howard Zinn’s fake history of the US.

And so, these are the four tyrannies we and our children must now face; three foreign and one home-grown. They support each other synergistically in simple and not so simple ways. All you have to do is turn on CNN, the BBC, read the New York Times, or listen to the CBC. The apologists are all there.

This is not only as, Harvard Professor Samuel Huntington once argued in 1996, a clash of four or five geographically distinct civilizations. It is something deeper—the ancient clash between free and enslaved, between the spiritual heirs of ancient Athens and Jerusalem and those of despotic imperial Persia. Them and us.

The four tyrannies are as different as chalk and cheese, and one must learn their languages and history to get the unique measure of each one. This can take a lifetime and, unfortunately it breeds clientitis among students who are then often bought off by the cash rich regimes of the people they study! Too many experts have failed to notice it.

The four tyrannies all have one thing in common: they hate representative democracy and the citizens of those nations who defend it. It is that simple.

We in Canada, the USA and the West have trouble on our hands—for even conservative and classical liberal elites in Ottawa and Washington do not talk about the four tyrannies as one phenomenon.

Whichever way you try and square it, the four tyrannies stare us in the face. You only have to connect the dots to see them. Let us hope that some brave journalists will soon ask Prime Minister Justin Trudeau and newly-elected Conservative leader Erin O‘Toole, when the Canadian Parliament reconvenes, just how they will defend Canada and Canadians from these four horsemen of the apocalypse, for they are riding towards us with a vengeance.

It would be nice if a Republican Senator or Congressman introduced the term into the presidential campaign in the next few weeks, but it is unlikely.

My African colleagues are watching us carefully. They want to know if we can stop the four tyrannies. Their own freedom and that of their children, may depend on it. Black lives truly matter, especially in Africa. And they want freedom—now more than ever.