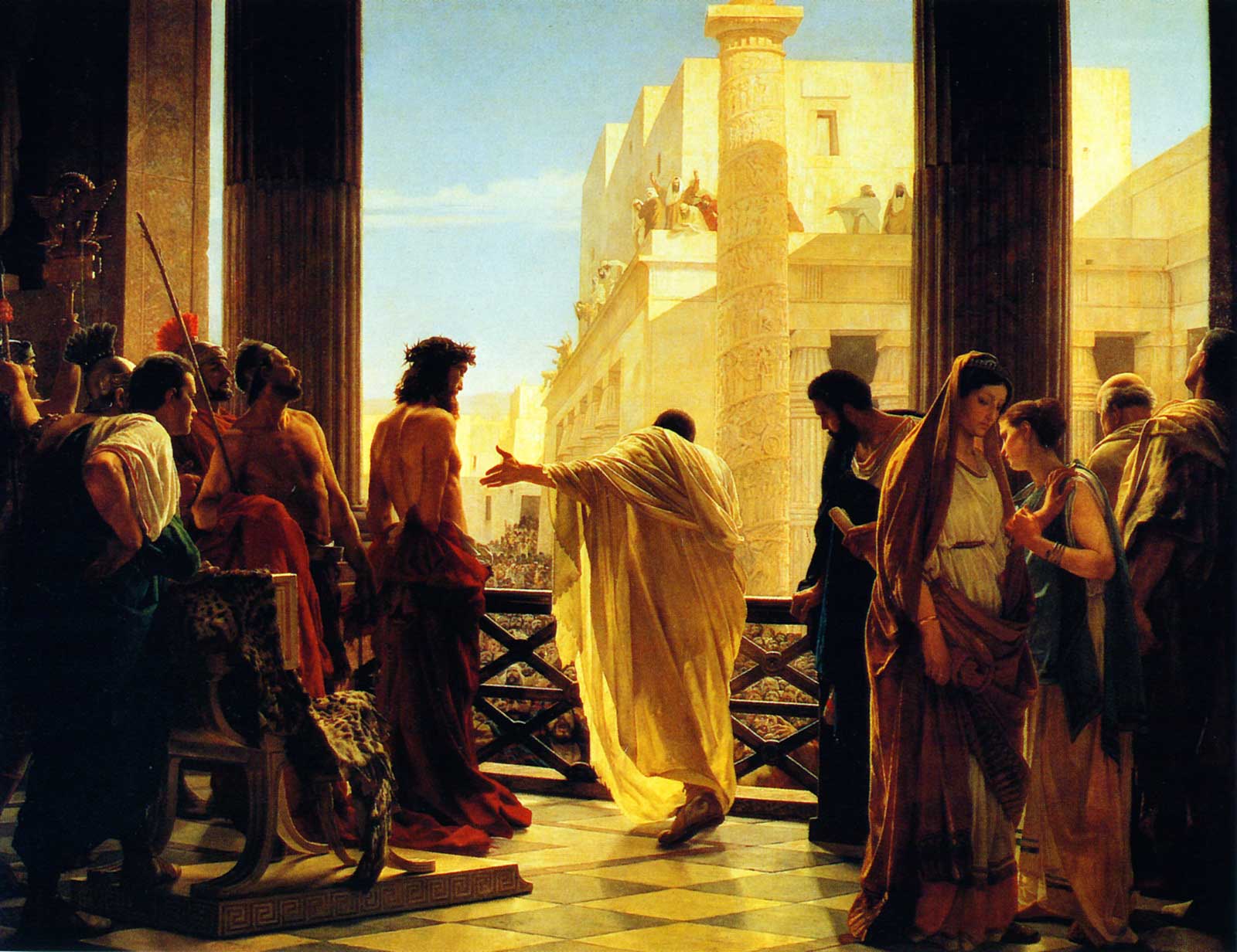 Since the trial of Jesus Christ, and long before it, Truth has been the main casualty for most of the ills of this fallen planet. It’s as if the world is possessed by some powerful demon hellbent on destroying Truth by re-shaping Western civilisation and distorting reality. One good example is the recent paradigm shift in the mainstream media, which is now a chorus of mostly lies in flawless unison, with the exception of the great Tucker Carlson.

In the movie The Exorcist, the character Fr Merrin says to his assistant, Fr Karras: “The demon is a liar. He will lie to confuse us; but he will also mix lies with the truth to attack us. His attack is psychological, Damien. And powerful.”

But in a world saturated with lies, why is it that so many decent people have such a big problem with the Truth? If something is true, surely then it must be right to believe in it? And if it’s right to believe it’s true and is morally good, then it makes sense to follow that path regardless of how difficult it is.

That’s not to say that occasionally being morally pragmatic by being economical with the truth for the greater good in a complex moral situation, or trivial one, is wrong; but ultimate Truth based on reality is what we should all strive for.

The Bible is unambiguous about this. ‘Woe to those who call evil good, and good evil; Who put darkness for light, and light for darkness; Who put bitter for sweet, and sweet for bitter!’ (Isaiah 5:20) During the trial of Jesus, the Roman Prefect, Pontius Pilate, put darkness before light when he succumbed to the mob and sentenced Jesus to death (circa AD32). Just before sentencing, he asked Jesus, ‘What is truth?’ then he quickly left the room avoiding an answer.

The answer is to be found in the Bible’s most profound sentence, which I’ve repeated before in my writings: ‘In the beginning was the Word’ (John 1:1). The Word in Greek means Truth. It also has lots of other meanings, all of them related to the Truth (Logic, Love [holy], Reason, Beauty, Good, Reality, etc), but ultimately Jesus as God incarnate.

For me, the crux for this overall argument for Truth is both evidential and existential, based on reasonable faith and not a blind leap of faith or unreflective obedience to the flawed moral advice of some apostate Church leaders or crackpot career scientists/politicians/’experts’. Having said this, I’m acutely aware of my own moral shortcomings and the ‘beam in my eye.’

For those who were born and raised Christian, particularly Catholic, but later became an agnostic in adulthood, there are many possible reasons that might have led to the loss of faith and rejection of hard truths.

Some lapsed Catholics fall into the trap of the genetic fallacy regarding the sex-abuse scandals falsely attributed to the Church, when in fact it was because of a cabal of deviant anti-Church leaders and lower-ranking fake clerics, thus the reality of the scandals is not the real Church, but evil counterfeit priests who infiltrated it to gain access to vulnerable youths, as well as to destroy Catholicism.

A lot of lapsed Catholics were also subjected to the lightweight branch of Christianity taught to them in school and through Church teachings. In post-Vatican 2, such teachings were seen by many devout Catholics as pragmatically worldly, purely devotional, properly basic, thus not soundly intellectual or evidential.

And some Catholic teachings were also overly matriarchal, which seemed to put more emphasis on Our Lady than on Our Lord, despite Our Lady being profoundly important in a Catholic’s veneration (not worship) of her and her acting as a mediator for Our Lord.

In other words, regarding mainstream religious education, certain aspects of Christianity couldn’t be questioned, and had a seemingly mythological narrative void of any sophistication or logic; a theology for toddlers, if you will. That’s not to knock properly basic Christianity, but having a deep knowledge in what one believes can only enhance reasonable faith in Our Lord and lead to Truth.

Furthermore, the many clerics, particularly post-Vatican 2, were, and still are, theologically challenged, trendy and sycophantic to PC politicians in power and their proxy warrior foot soldiers: New Left Woke Red Activists.

The superficial faith of the modern cleric seems to be based solely on their emotional experience of seeking popularity. You rarely hear them speak out against Naturalism, relativism, degeneracy, sins, lies and the lunacy of what passes for ‘social justice.’ As for the existence of Hell? Forget it.

For them, real Catholicism is an extremely uncomfortable world view, if not taboo. But don’t take my word for it: Back in 2017, the BBC World Service recently asked in a radio podcast, ‘Is the pope a Catholic?’ The question was in reference to a group of Catholic scholars and priests who wrote an open letter to the College of Bishops accusing Pope Francis of heresy. The letter accused Francis of a “comprehensive rejection of Catholic teaching on marriage and sexual activity, on the moral law, and on grace and the forgiveness of sins.”

At Mass, you won’t hear a word about this letter. These soft-spoken, nervous priests invariably deliver cliché-ridden homilies of maudlin mush. But long before Vatican 2, since post-Reformation and French Revolution, many Catholic clergymen (not all) were also worse than useless.

However, there are some good authentic clerics in the Church who seek Truth but they are in the minority and unpopular with senior liberal clerics and a-la-carte superficial ‘Christians’ who can’t bear to hear authentic Scripture. Is that why there are so many intellectually challenged Catholics today, as well as those who don’t want there to be a God for moral autonomous reasons, invariably sexual?

Ironically, for many traditional Catholics, it was the intellectual apologists (defenders) from a section of the Anglican Church who seem to be most faithful to Christ and brought about a renaissance in apologetics during the late-1960s.

But don’t just take my word on it. In the book, From the Depths of Our Hearts (Ignatius Press, March 2020), Cardinal Robert Sarah comments on many aspects of contemporary Catholic teachings. In Sarah’s view, too many Catholic priests “have become specialists in the fields of social, political or economic activity,” providing for the material rather than the spiritual needs of their charges. “I am ashamed to admit it,” he writes, “but the Evangelical Protestants are sometimes more faithful to Christ than we are.”

There’s also the problem of so-called Catholic universities, where the theology taught on such campuses leans toward Third World Liberation Theology, which is more ‘Church of Sugar’ than ‘Church of Truth.’

Finding Truth, and not being popular with friends who uphold falsehoods, should be the ultimate goal of any devout Christian or someone concerned about the internal fate of his or her soul. In his Commentary on Aristotle’s Nicomachean Ethics, St Thomas Aquinas wrote: The truth is a divine thing, for it is found first and chiefly in God, therefore that it is virtuous to honour truth above friends.

As for Pilate: We’ll never know if he made peace with God and received the gift of the true meaning of Truth. Today, the university campuses worldwide are full of truth-deniers milling around, all marinated in postmodern claptrap and denial of the Logos.

A world without Christ, is a cold-hearted spec of solar dust spinning around a dying star and surrounded by dead planets; a World of the Absurd, if you will. And I can’t live in the Absurd where the objective moral rules of the game of life don’t apply and where subjective perception is reality.

No doubt, such a world gives great comfort to the psychopath, degenerate, or theologically illiterate, but not for people of rational thoughts. Before I reverted back to Christianity, the atheistic, ideological intoxication of the secular anti-West, in all its intellectual ugliness, filled me with a feeling of dread and nausea because of its falsity. Only Truth can conquer that.