Baldwin Bridges and the Death of the Republic 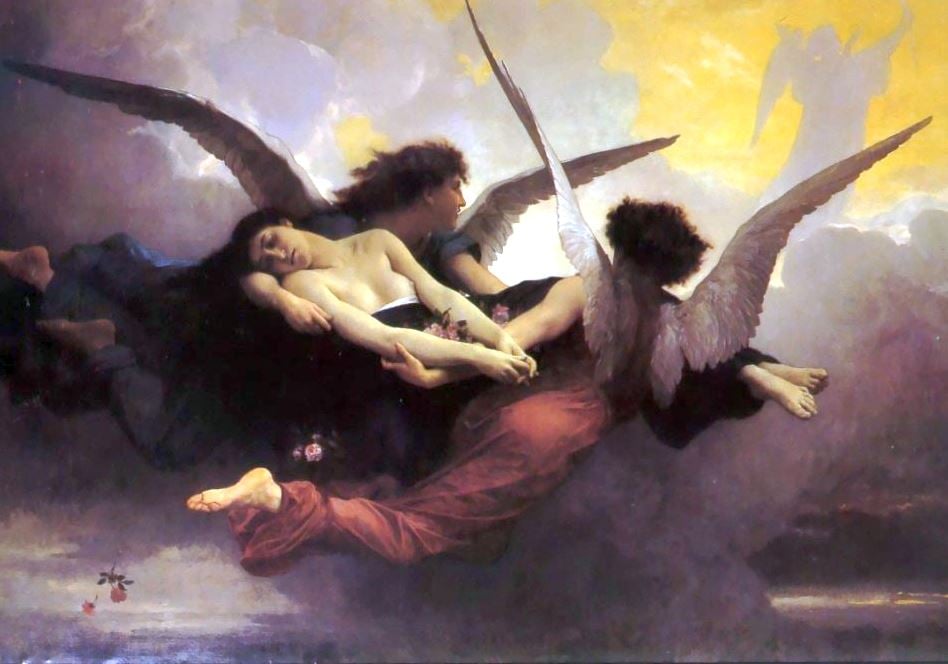 Baldwin Bridges wore the robes of a senator,
Proudly proclaiming the divinity
Of the Republic and her laws—
A man of noble birth, the son of a senator,
And of a mother much distraught
Over a prophecy about her child:
‘He will bring about the end of the Republic.’
Her husband chided her for heeding
The words of a single prophet
(Even though the Spirit bloweth where He listeth);
Baldwin likewise tried to forget them,
Yet they remained present to his mind,
As a grain of sand to a foot in a leather shoe.

And, lo, it happened of a day,
As he walked the white stone streets
Lined with oaks with their silver-green leaves,
On his way to the Great Temple
To burn the daily offering of incense
To the Republic, that he heard a venerable bishop
Speaking strange things—of a ‘kingdom not of this world;’
‘Here we have no abiding city;’ ‘Loving God
With all our strength and our neighbor as ourselves
Is the fulfilment of the Law and the Prophets.’

Baldwin was captivated by the teachings
Of the Christians, which savored of living spirit
And not the dead forms he had always known, and soon
He, a highborn official, was sitting at the feet
Of the humble servant of God, Bishop Valerian,
Who led Baldwin gradually through all the degrees
Of initiation into the Orthodox Church.

Truly then Baldwin’s soul was blazing
With the fiery zeal of Elijah the Prophet,
And he asked the Bishop for his blessing to place
A copy of the Four Gospels
Upon the Tablet of the Law—
The governing charter from the founding days—
Which the Republic holds most sacred,
As a testimony to the citizens
Of the truth of Christ and the Trinity.
The wise elder, knowing of God’s approval,
Assented, and with the sign of the Holy Cross
He blessed him as he left the church.

That very night, Baldwin, with Gospel book
In hand, hastened to the Great Temple.
His steps were swift and light inside,
As he made his way toward the canopied shrine,
His feet feeling the thin layer of soft dust
That covered the Temple’s marble floor.
The guards did not hinder him; many indeed
Were glad to see him there again, having grown
Uneasy at his long absence from the rituals.

Now he stood before it, the Tablet of the Law.
And now he placed upon it the little book,
The Holy Gospel of the Lord and Savior Jesus Christ.
And though it was a massive sheet, and metal,
It broke apart into many jagged pieces
Because of the Grace of God in His holy book,
As the shrine itself collapsed upon it all.

Then was there a hue and cry, and much commotion.
Baldwin, seeing the Gospel book unharmed upon the heap,
Took it up again into his hands before the guards
Fell upon him. They handled him roughly,
And beat him cruelly, and threw him into a prison cell,
With no breeze nor food nor light, for several days.
But unbeknownst to them, God sent an angel
To him whose presence provided him light and cooling dew,
And who brought him a delightful bread from Heaven
To give healing and strength to his battered body.

When the wrath of the Senate at last subsided,
And the jailer was ordered to open the prison door,
Instead of a man weak unto death and compliant,
There stood Baldwin Bridges, bold and defiant!
The crowds of spectators shouted, ‘Great is the God
Of the Christians!’ But Marcus, President
Of the Senate, was irate, and, ripping the Gospel
From his hands, ordered Baldwin beheaded—without delay.
Thus did Heaven receive his pure, martyred soul,
And the earth gain the gift of his holy relics.

The Senate hastily named all Christians
Enemies of the Republic, and ordered
A persecution against them—but to no avail.
For the affections of many of the people
Now lay with the Christians; and their fearlessness of death,
Their love for one another and those who wish them harm,
And the miracles manifesting at their martyrdoms
Brought even more into the Church,
As the citizens esteemed these as of far greater worth
Than the glory of the Republic and the form of the Law.

But the final blow came from within.
President Marcus fell ill and did not get well.
The doctors were confounded; he lay at death’s door.
One night, in great despair, he fell asleep,
And while at his rest, the soul of Baldwin
Appeared to him, radiant in golden light.
He consoled his former colleague, but sternly warned him:
Unless he abandoned his nation-worship
And yielded to Christ, his sickness would end
In a miserable death, and an even worse fate
Beyond the grave. But if he believed and was baptized,
His life on earth would be lengthened, and his joy
In the next life would be beyond his knowing.

The dream ended, and Marcus awoke to find
That the day had dawned. He wasted no time
With inner qualms, but sent for Bishop Valerian
Straight-away. After a short conversation,
It was secretly decided: Marcus would be baptized.
And as soon as he emerged from the font,
As Baldwin had promised, his sickness fled away.
Seeing this wonder, the fury against the Church stilled
And ceased—Christ had triumphed over the Republic.

To the dignity of king the Senate raised Marcus,
The better to emulate the Heavenly Kingdom,
And asked him to recommend changes to their country
For the good of the new Christian folk.
King Marcus met this task energetically,
Writing new laws based on the Holy Scriptures
And the best of their old customs; raising up
Churches and monasteries throughout the land;
Establishing an assembly of the lower classes
To advise him and the Senate of their needs.

The Great Temple he had cleansed and consecrated
As the main cathedral of the kingdom,
Dedicated to the Holy Martyr Baldwin,
Whose blessèd relics, together with his Gospel book,
Recovered by Marcus from the keeper
Of the contraband when the persecution ended,
Now occupy an honored place within,
Bestowing God’s Grace on countless burdened souls.

And that is how a prophecy was fulfilled,
And idolatry was overturned; how a mother’s fear
Was turned to joy, and a father’s loss
Became the greatest gain for him
And for all his fellow countrymen.