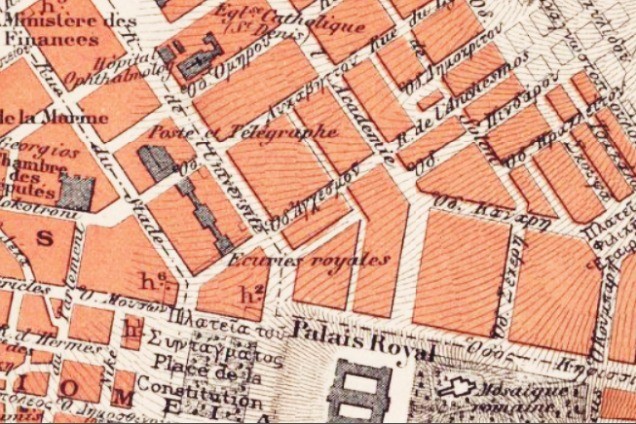 For the usual suspects: I soliti ignoti

Tanks treading the broad avenue below
Lykavittos Hill, home that we then knew,
I woke to marches on the radio:
I’d slept clean through the [redacted] “Colonels” coup!
Quel drag! Our plans left little more to do:
bags packed, Akdeniz anchored in the Bay—
but conscripts’ fixed bayonets now bluntly blocked our way.

“You go back to your country;[1] we must stay,”
said Mr. T, my Spartan landlord, whom a railroad
had once hired (then pensioned) in the USA.
He kept his Yankee passport snugly stowed,
so that its thin blue line discreetly showed,
in the top pocket of his shirt—and got …
sought, I imagine, to convey … but perhaps not.

Returned once more from Sicily, I’d gone
to a movie downtown and chanced to see
film of USS Forrestal at Phaleron,
with Pattakos,[2] the Junta’s bald Telly
Savalas double (“Kojak” of the NYPD?),
shaking hands, amid faked grins à gogo,
with the admiral, Jack K. Beling, U.S. supremo.[3]

From the movie house, a great sigh arose.
America’s blessing dished out that way,
one could no more hopefully suppose
that the “Colonels” might “just go away.”
They’d clearly lucked into a lengthy stay!
We all in unison sighed in our rows.
What price the Cold War contumacy of “us” and “they”?

And now the gathering fog of mayhem!
I’d once been a guest on that carrier too,
and not presuming any “us” or “them,”
I asked Mac, a pilot I’d met, who knew
—he’d flown an A-4 Skyhawk in Vietnam:
“What’s it like, then, when you’re in combat?”
Grinning, a Rolling Thunder Cheshire cat,
he reached for the right words: “What can I say? It’s fun!”

[1] I.e., South Africa.
[2] Brigadier Stylianos Pattakos, one of the three principal figures in the Junta that came to power in the 1967 coup (and later expelled Peter Dreyer and Jon Cloud van Leuven, editors of the Mediterranean review Omphalos, from Greece). Long Imprisoned for treason after the fall of the Junta in 1974, Pattakos died in 2016 aged 104.
[3] Captain John Kingsman Beling (to give him his rank on that occasion) was a second-generation Sinhalese Burgher American and may have been discriminated against as such. After being promoted to rear admiral in 1968, and put in command a carrier battle group, his orders were cancelled by Chief of Naval Operations Admiral Elmo Zumwalt and he was sidelined to command of a naval air station in Iceland.
[4]  The film’s protagonist Vittorio Gassman, known in Italy as il Mattatore (“the Matador,” or starring performer).
[5] The Italian chant in Mario Monicelli’s 1966 film L’armata Brancaleone (“Lion Paw’s Army”) and its sequel, Brancaleone alle Crociate (“Lion Paw the Crusader”) runs: “Branca, Branca, Branca! Leone, Leone, Leone!” The historic Pallas Theatre, Odos Voukourestiou 5, was where L’armata Brancaleone  was screened.