I keep hearing about this modern phenomenon “the kidult”. Supposedly someone who is old enough to know better who has not yet grown up. Where have I heard that? I thought. Not from my late parents but from certain relatives of the born middle aged variety. I get “When are you going to get your hair cut? You can’t still have long hair when you are 30/40/50/55” (I am now 54) from my older and bossy cousin. I think “When are you going to stop dying yours, you can’t have bottle blonde hair at 60?” but I say nothing. Because she cannot accuse me of “needing to grow up”. Not with my and my husband’s track record of responsible work history, proven family responsibility (coping with illness, bereavement, childrearing etc.) and all round reliability.

These are some youngsters, late teens early 20s, away from their families and writing home:

“On our way (by bike). . . we miss the road, turn into a muddy field, dive into ditches, over the plank crossing a stream and crash the wire netting. . . tonight we did it in the dark – most of our cycles returned safely but ditchwater dun half taste peequleeah.”

No. Members of Bomber Command stationed in Eastern England in 1941. Boys, men, whose life expectancy was at times less than that of an infantry officer during the previous war. The course was navigation or similar. But steam had to be let off and there are worse ways to do it than pillow fights and getting muddy.

I thought I had better get a definition of this new word “kidult”.

While many people in their forties have families and responsibilities, an increasing minority still resemble teenagers. Scary, wrinkled, grey-haired teenagers, with some kind of terrifying premature ageing disease, but teenagers nonetheless. It’s enough of a phenomenon to have been given its own portmanteau label: kidult. They’re adults, but they behave like kids.

Wiktionary defines it as “A middle-aged person who participates in youth culture and activities traditionally intended for children”.

The Urban Dictionary has a definition I prefer “A kidult is an adult that prefers items that society deems are for a younger person”. Another contributor elaborates that they “May or may not be great parents as well as being able to take on adult responsibilities. Not necessarily too immature . . . ”

Herring thinks it is, in his case if not everybody’s, selfishness and a fear of responsibility. The dictionaries are less judgmental and think it is a refusal to conform to accepted taste.

I think it comes down to the difference between childlike and childish. Both meaning in the manner of a child.

But childish is not good; even in a child it is something to be discouraged and grown out of. Petulance, selfishness, the word conjures up tantrums and difficulty.

But childlike conjures up a feeling of innocence. It has never been safe to be too innocent for too long. But to retain a sense of wonder at the world, and a sense of fun is a gift.

Certain adults sneer at those over 21s who read the Harry Potter novels for their own pleasure. All I can say is that for 5 years we bought my father-in-law that year’s Harry Potter novel for either his birthday or Christmas present. He is an 85 year old retired clergyman who served in North Africa during the war. If he and my mother-in-law, a retired nurse, are childish kidults, then we are in good company.

I think there is a gender aspect to this as well as an age factor.

Richard Herring says that women cannot be kidults, or only rarely unless they have no children and no desire to have them. I disagree. But.

There is a certain type of woman who regards all male interests as childish and has no enthusiasm for aircraft, football, all sport, castles, or engines, be those engines steam or the infernal combustion. The popular motoring programme Top Gear is supposed to be a “lads” programme but in reality it is enjoyed by both sexes and all ages. I am supposed to loathe it but I don’t.

I went to see the Star over London Zeppelin at its temporary base last month. There were plenty of people there, some (all male) aircraft enthusiasts, some local middle aged and elderly couples who were intrigued at this huge thing coming over their house and a party of school pupils of around 15 years, with their teacher.

The Zeppelin came in maybe 50 foot above our heads to land in the adjacent field. I was the only woman with a camera. I seemed to be the only adult woman showing any enthusiasm for the airship itself or having any knowledge of their history over England. The schoolgirls were showing just as much interest. Their teacher was very enthusiastic and this was having an effect on all his pupils. One of the airship pilots is a woman so maybe they will be the next generation.

The Bomber crews, as described by Patrick Bishop the author of Bomber Boys from which I quoted above, were “doing a job that would harrow the most hardened veteran but in many ways they behaved like the adolescents they had so recently been”.

My husband belongs to an unofficial reunion club of his old regiment. A few years ago they (men of all ages) returned to the site of some of their training. Some sedately took the tourist path around; others went off piste as they did when in service. Some wore silly outfits including one chap who dressed as their mascot which outfit included a pink fright wig. There was a lot of harmless horseplay and the weekend raised money for various charities including homeless ex-servicemen. But they had nothing to prove. No need to act sober and responsible; they had proved sober and responsible by their service in a formidable regiment. Mind you no one in their right minds would mess with that bunch so they could wear all the pink wigs in the world with impunity.

I have spent this last week working with my church’s children’s holiday club. When I spent a happy half hour with the Toytown market floor puzzle was I indulging the kidult, or responsibly checking that all the pieces were there, lest a child be disappointed? When I built a boat from a cheese carton and a broken biro (which did float, for a while) was I entering into the spirit of things or failing to act my years?

So having ambled round the subject I think I am coming to several conclusions.

1 Immaturity and selfishness are flaws but they are not to be confused with a sense of fun.

2 If you have got a track record of responsible behaviour you have nothing to prove and can thus act naturally when it is not irresponsible so to do.

3 So called childlike tastes and interests do not necessarily mean an immature personality.

4 I am not a kidult, merely a big kid and I consider myself to be in the best of company. 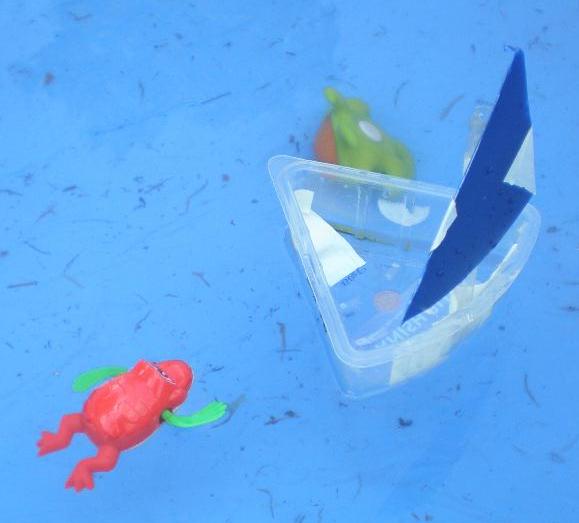 The Good Ship Danish Blue prepares to repel boarders in the shape of the Crimson Pirate Frog.
.
..

To help New English Review continue to publish entertaining articles such as this one, please click here.