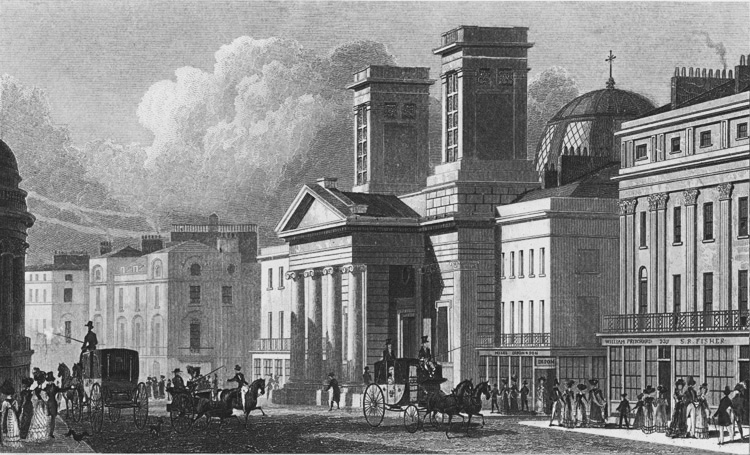 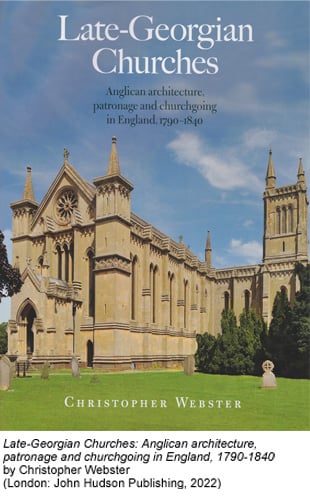 Let me state at the outset that this is a fine piece of book-making in every way. Beautifully and comprehensively illustrated, well designed and printed on good paper, with a text that is both scholarly and readable, it is also a much-needed volume, dealing with a neglected and under-valued period in the history of English church-building. Later, more earnest Goths, those approved of by the Ecclesiologists (who could make or break architectural reputations, and did not hesitate to do both), have had things more-or-less all their own way for far too long, so Webster’s book redresses the balance. The stunning colour photographs, many taken specially for the book by the late lamented Geoffrey (‘Geoff’) Kenneth Brandwood (1945-2021) and by Webster himself (who has a good eye, and whose fine pictures are mercifully free from ghastly converging verticals which ruin many a book on architecture), are truly marvellous, and demonstrate conclusively that before Augustus Welby Northmore Pugin (1812-52) fatally confused architecture with morality, some very decent and even architecturally distinguished churches were being erected in England. 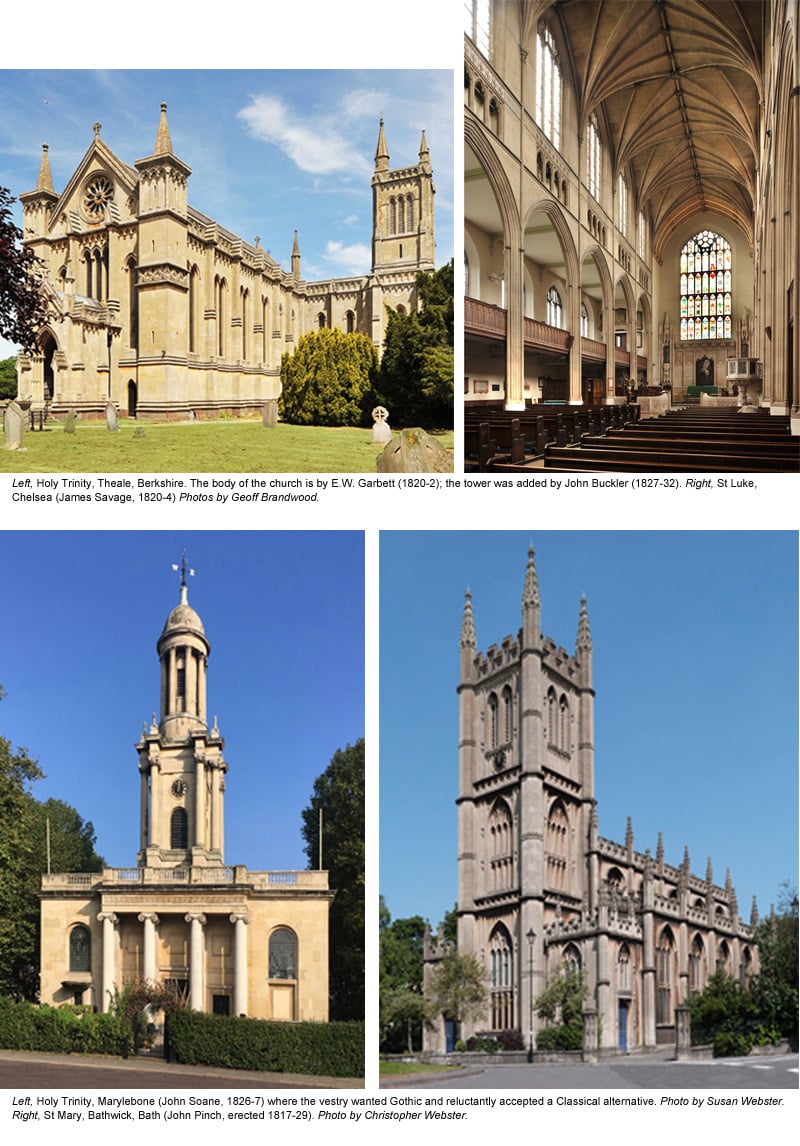 The period covered was a time of great anxiety and upheaval, what with the French Revolution, dangerous notions in the air, the Irish Rebellion of 1798, advancing Dissent promoted by contumacious Nonconformists, demands by Roman Catholics, increasing Godlessness and Utilitarianism, expanding populations (especially in urban areas), industrialisation, and long years of war, so the Church of England was perceived as a necessary bulwark against the tempests of change, and some 1,500 Anglican churches were built, many of them very fine works of architecture by any criterion. Some were Classical, including noble works by Sir John Soane (1753-1837), Joseph Bonomi (1739-1808), George Steuart (c.1730-1806), Sir Robert Smirke (1780-1867), William (c.1771-1843) and Henry William (1794-1843) Inwood, Francis Octavius Bedford (1784-1858), Charles Robert (1788-1863) and Samuel Pepys (1753-1827) Cockerell, and others, but many were Gothic, from delicious, lighthearted Georgian Gothick (such as Holy Trinity, Teigh, Rutland [1782], and St Mary Magdalene, Stapleford, Leicestershire [1783], both by George Richardson [c.1736-1813]) to serious, scholarly, well-observed Pointed (e.g. St Luke, Chelsea [1820-4], by James Savage [1779-1852]). 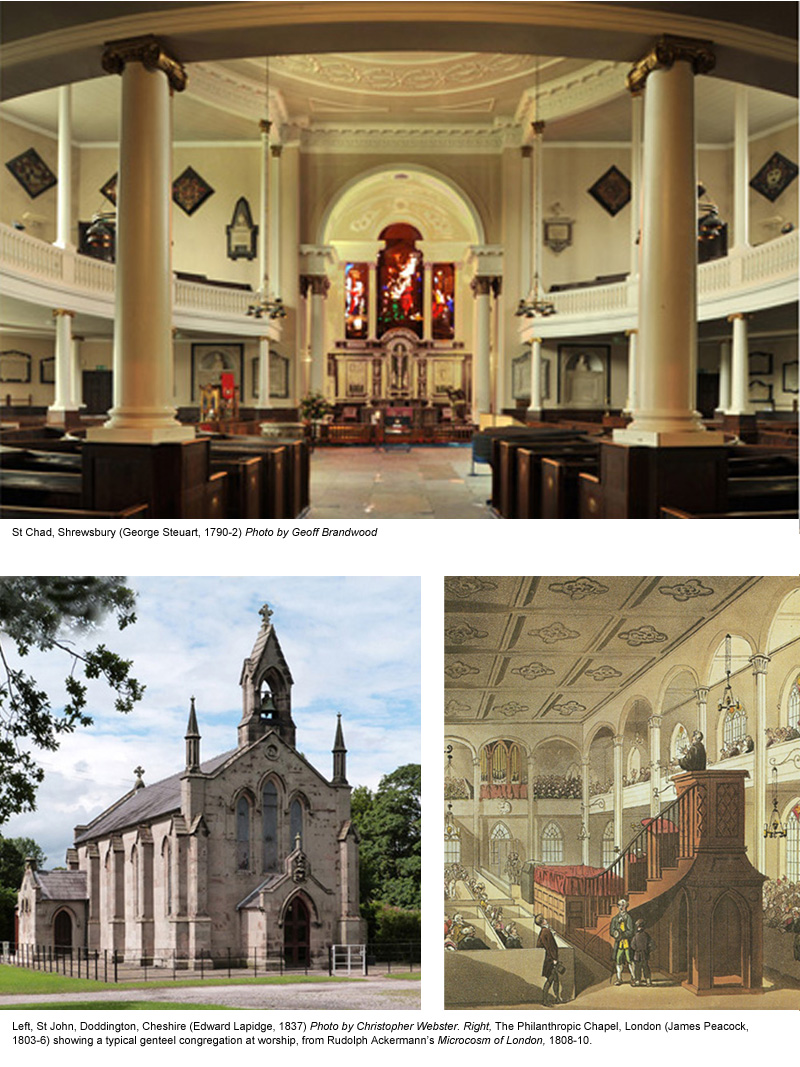 One of my favourite Gothick churches is St Margaret’s, Thorpe Market, Norfolk (1796), by Henry Wood (fl. 1790s), which was felt by a contemporary commentator as failing to ‘throw that devotional gloom into the church which produces such evident effect on the mind.’ It is probably that failure which appeals to my sensibilities, for the delightful interior, with its thinly ribbed ceiling, filigree-like screens, and boldly patterned stained glass add up to an ensemble of great charm. Webster illustrates the exquisitely satisfying exterior, but does not show the building’s innards, but I suppose one cannot depict everything. There are other, greater things in the book, such as the amazingly elegant interior of St George’s, Everton, Liverpool (1813-14), featuring much structural ironwork, designed by the iron-founder 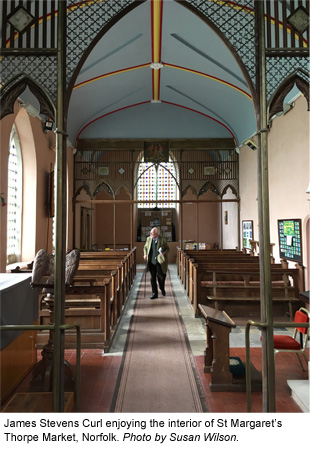 John Cragg (1767-1854), with Thomas Rickman (1776-1841). The latter’s An Attempt to Discriminate the Styles of English Architecture from the Conquest to the Reformation (1817, with many subsequent editions) subdivided the mediæval styles of architecture into sensible sections: superbly and comprehensively illustrated, this important volume provided a secure foundation for later studies, helping protagonists of the Gothic Revival to rise to the occasions demanded of them.

Dr Webster, of course, has ‘form’ as a scholar in matters concerning English ecclesiastical architecture, having published many admirable studies, including an excellent monograph on Robert Dennis Chantrell (1793-1872), architect of the splendid St Peter’s, Leeds (1837-41), an essay in Gothic that for its date was unusual in its size and quality. This new book is the best thing he has done, and his publisher has done him proud. But as a bibliophile and a scholar, I do wish publishers would not inflict those abominations called ‘endnotes’ on readers, for they are a pain to use. Footnotes avoid constant shuffling back to the appropriate page. Publishers seem to be leery of producing books that ‘look scholarly’ (which is how they seem to perceive footnotes), but interested readers should be cherished, not irritated by having to try to look things up in those ghastly ‘endnotes.’ There is nothing æsthetically repulsive about footnotes: on the contrary, they enhance the page and inform the reader. Why, in what is now known as The Atlantic Archipelago, does everything have to appear to be dumbed down?

Webster deals thoroughly with church architecture and questions of style, ecclesiastical architects and their milieu, constructional and decorative innovations, the practical issues (given that preachers had to be seen and heard by all within), the planning of liturgical space, the question of seating congregations, the financing of and reasons for church building, and much else There is also a gazetteer, a bibliography, and a serviceable index. All in all, Webster’s tome provides excellent, handsome, and useful coverage of the topic and period.

Apart from the endnotes, I have one or two minor quibbles. One interior is reproduced twice, and a cheap quotation, derived from Corbusianity, ‘a machine for listening in,’ is repeated. William Chadwell Mylne (1781-1863) had no s at the end of his surname, and the distinguished author of a monograph on Lewis Nockalls Cottingham (1787-1847), Professor Janet Myles, will not be entirely overjoyed to have her surname changed to Mylne.

But this otherwise marvellous book is most warmly recommended: it is a delight, one of the best illustrated books on architecture I have ever handled, printed, mercifully, in England, rather than in China.

An earlier version of this review appeared in The Critic.

Professor James Stevens Curl, Member of the Royal Irish Academy, Fellow of the Society of Antiquaries of London, Fellow of the Royal Incorporation of Architects in Scotland, is the author of numerous works on architecture, including English Victorian Churches: Architecture, Faith, & Revival, also published in London by John Hudson Publishing, 2022.