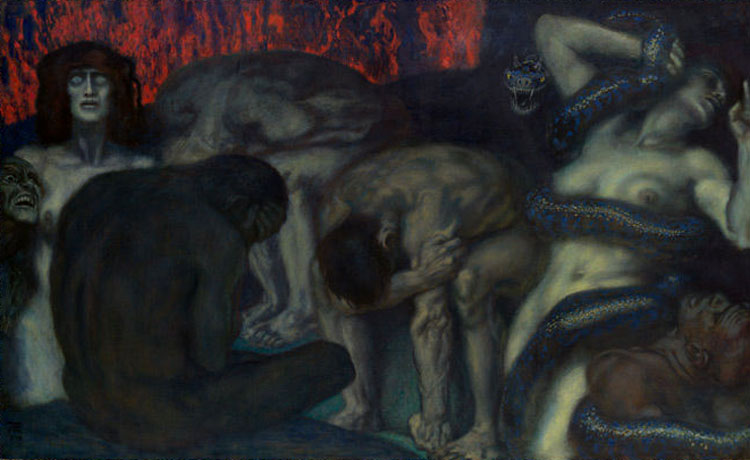 Yet I think the demon’s target is not the possessed; it is us … the observers … every person in this house. And I think—I think the point is to make us despair; to reject our own humanity, Damien: to see ourselves as ultimately bestial; as ultimately vile and putrescent; without dignity; ugly; unworthy. And there lies the heart of it, perhaps; in unworthiness. —The Exorcist

William Friedkin’s film The Exorcist was a chartbusting success when it was first released the day after Christmas in 1973. Audiences were shocked, repulsed and horrified. Some became physically ill and left the theater.

The Exorcist has received a lot of attention for its sensual portrayal of evil. Friedkin defended the vulgar aspects of the film by arguing that evil in the real world surpasses anything that fiction can fathom. This is corroborated by Malachi Martin in his book Hostage to the Devil: The Possession and Exorcism of Five Americans. Besides its over-the-top visuals, the film employed a highly talented cast that sold the essence of evil to what, at that time, was becoming an unbelieving Western populace. By the early 1970s, even some believers were apathetic about the question of evil. Apathy and dearth of imagination muddle the relationship of good and evil for Christians and others alike. The damning culprits were, and continue to be today, unbounded, savage secularization and the chic, alleged modernizing and liberating appeal of Vatican II.

The Exorcist, The Novel

Many viewers of the film do not suspect it was inspired by William Peter Blatty’s well-written novel of the same name. The novel’s vivid portrayal of incarnate evil served as a great conduit for cinematic visual effects. Blatty delves into the complex and rich orthodox Catholic theology of evil, the Church’s Magisterium, in an intelligent manner. That is, Blatty shows evil’s manipulation of the human person and how evil distorts man’s ability to decipher appearance from reality. The novel was published in 1971, the highly successful film followed in 1973.

Blatty’s The Exorcist merits a timely revisit. The literary specter of evil that Blatty creates is undoubtedly effective in conveying fright and horror; mostly metaphysical horror that begs the question about how much we think we know about human reality.

The novel greets unsuspecting areligious readers with a profound understanding of the metaphysical and epistemological foundation of evil. Readers often find it difficult to traverse through the novel without taking refuge in the imaginative literary conventions that novels require of thoughtful readers; namely, to treat it as mere fiction. Naturally, if the graphic depiction of evil in the novel sends readers reeling with fear, why not take the novel to the cinematic level? The Exorcist went through many printings in several years, including a 40th Anniversary Edition that was released in 2011.

Blatty wrote the novel after hearing about the exorcism of a young boy in St. Louis, Missouri in 1949. Blatty was a student at Georgetown University at the time. The boy was from Maryland and was taken to his relative’s home where the exorcism was performed. The model for Fr. Merrin was the British archaeologist Gerald Lankester Harding who excavated the caves where the Dead Sea Scrolls were discovered. From 1936 to 1956, Harding was director of Jordan’s Department of Antiquities. Blatty met Harding in Beirut.

The Exorcist—the novel—is an astute depiction of evil that otherwise escapes notice by casual fans of horror films who have been conditioned to expect banal onscreen mayhem and destruction that lacks redeeming qualities. Blatty was a practicing Catholic who consistently argued in his works for the reality of evil. While many of the effects of evil on the human person and social relations are lost in the cinematic treatment of the topic, the novel retains the vitality of evil as a metaphysical/existential possibility of human existence that affects human beings of flesh and bone.

The first part of the novel sets up the stage for the battle that is to ensue between good and evil. Father Merrin’s encounter with a demonic entity while on an archaeological dig in the Middle East sets the course for his later meeting with the demons that torment Regan MacNeil, the eleven-year-old girl who is the center of the novel.

Merrin’s encounter with the demonic spirit in the desert is a significant aspect of the Catholic theology of evil that Blatty does such a proficient job of explicating. From the outset, the demonic spirit in the desert alerts readers about the difference between the supernatural—the emphasis is on super: meta, beyond nature – and preternatural beings (spirits), angels and demons. While only God is thought to be supernatural in Catholicism, angels and demons are preternatural spirits that escape the sensory perception and knowledge that man has of the physical world. Understanding, or at worst, reflection on the possibility of preternatural spirits is of profound importance when dealing with demonology.

While man is an incarnate being (from the Latin corpus: flesh), demons are pure preternatural beings that are endowed with freedom, much as humans with free will. The difference is that demons are not incarnate beings. The latter is what makes humans physical and spiritual beings that live in a physical realm, thus enabling us to experience sensual enjoyment of physical creation. Lacking the ability to enjoy physical reality, demons are said to be motivated by an intense level of envy and resentment for physical beings: man. Merrin’s encounter brings to mind Paul’s assertion in Ephesians 6:12, “Our battle is not against human forces but against the principalities and powers…the evil spirits.”

Blatty’s treatment of demonic possession is commendable for its seriousness and attention to detail. The Exorcist is a reflection on nihilism and the dissolution of human values in postmodernity. This is a central aspect of the novel that few critics and commentators pick up on. Blatty’s illustration of possession is substantiated by Vatican-sanctioned demonologists and exorcists, including Gabriele Amorth in An Exorcist Tells his Story, Jose Antonio Fortea’s Interview with an Exorcist, and most recently, Msgr. Stephen Rossetti’s Diary of an American Exorcist: Demons, Possession, and the Modern-Day Battle Against Ancient Evil.

Blatty’s treatment of possession and demonic influence is in part a response to the unhinged values that postmodernism ushered. The Exorcist is in essence a sensual portrayal of one of the many dead-end, logical-conclusion of philosophical materialism. The author spends a large portion of the novel drawing the limits of reason that reduce human behavior to mental illness, biologism and positivistic psychologism. The free-willing lifestyle of Regan’s actress mother comes into question early in the novel. The subtle manner in which Blatty links the mother’s values, divorce and the girl’s absentee father with Regan’s demonic influence demonstrate the author’s prescient understanding of the problem of evil. Blatty eschews abstraction and theoretical vacillation; he began writing the novel in the late 1960s.

Readers who perceive the complex architectonic of the novel as transcending the sensually dramatic calisthenics of evil, realize that the battle between good and evil is not limited to a hapless eleven-year-old girl who plays with a Ouija board, which is seen as one of many portals that invite evil.

The meaning and purpose of evil is made known in an intelligent conversation that the two priests, Karras and Merrin, have outside the girl’s room. Karras asks Merrin about the purpose of evil. The older priest responds that the target of evil is not the girl, but everyone who is associated with the case. It is said that evil hides behind the many guises that postmodernity provides for it. The most important cover that postmodern nihilism affords evil is the ultimate anonymity that “evil does not exist.”

Evil creates paralyzing self-doubt and self-loathing in man. Evil accomplishes this through an array of everyday experiences that man often does not know how to internalize. A consequence of evil in human reality is the negation of God by atheist and agnostics. Blatty also explores this theme in his superb novel The Ninth Configuration.

The film and Blatty’s novel establish a careful progression of what Catholic exorcists regard as the three stages of possession, namely infestation, obsession, and finally possession. While the novel is by all apparent measures about possession, a close reading of the work puts on display Blatty’s greater suggestion that postmodernity is a haven for demonic infestation and obsession. One reason for this is the overtly-intellectualized yet naïve manner that positivism conceives human reality, leaving zero room for exploration of the transcendent and sublime. The latter is Blatty’s novelistic and philosophical prowess on display that merits a second reading of the novel.

Blatty identifies evil’s ability to erode man’s sensibility for beauty. Another of the strong suits of the novel that often go unnoticed is how well the author suggests that beauty is one of many antidotes to evil. A strong passage in the novel has Regan’s mother reading a book that Fr. Merrin has written, where belief is the form of renewal that defeats the banality of death: “We mourn the blossoms of May because they are to wither; but we know that May is one day to have its revenge upon November, by the revolution of that solemn circle which never stops – which teaches us in our height of hope, ever to be sober, and in our depth od desolation, never to despair.”

Calumny is evil’s most effective weapon against man that makes man fight his neighbor. Calumny is a trenchant vehicle that evil utilizes to belittle the integrity of the human person. This is so because calumny puts truth on hiatus, while propping up appearance and the lie. The latter is a timely problem in our time. Lamentably, few people ever notice calumny’s evil motivation and/or effects. Blatty suggests that calumny is the dominant value of postmodernity because it effectively shrivels truth down to the self-serving and self-absorbed mandates of relativism, thus creating a vicious circle of hollow existence, dysfunctionality and unbelief.