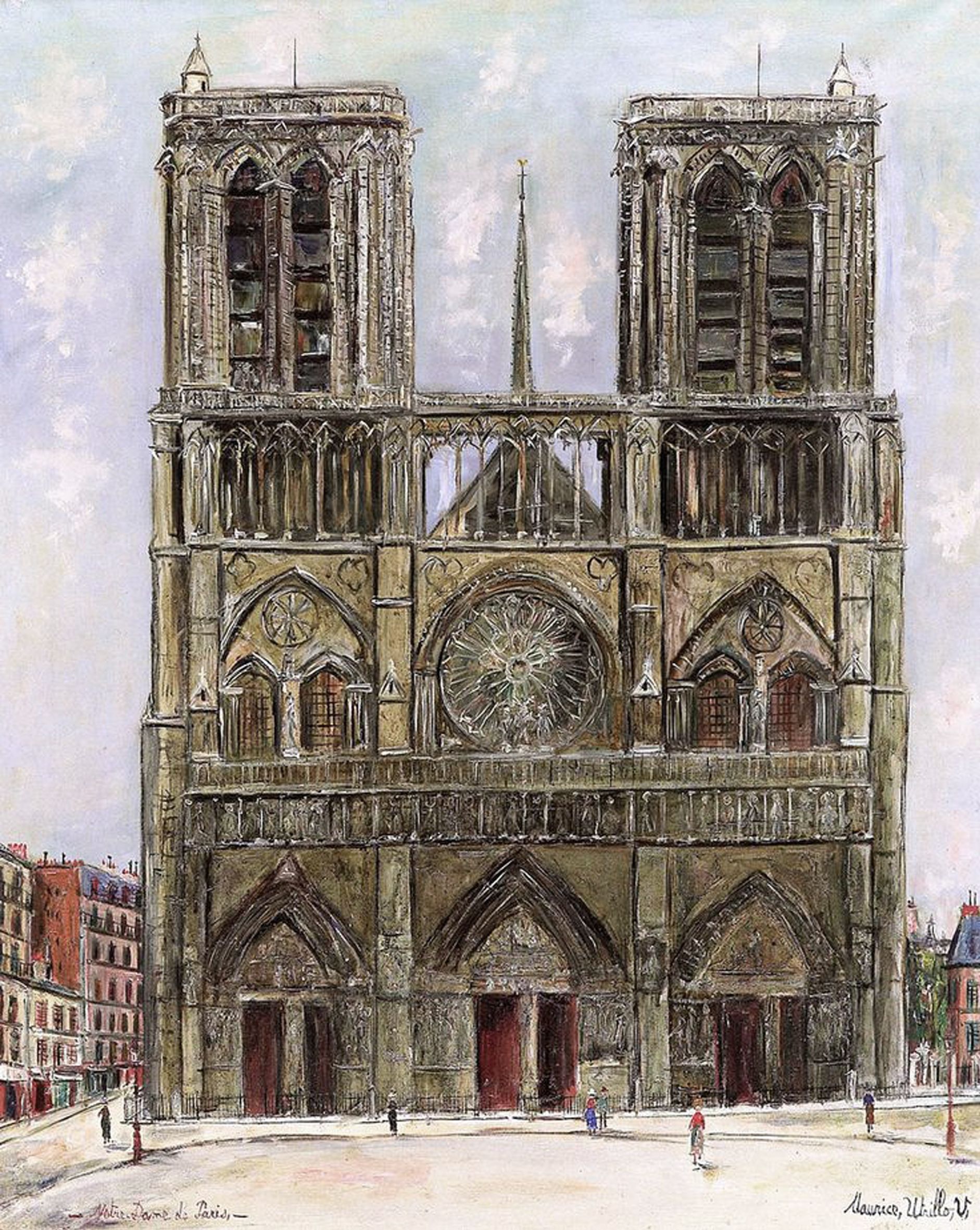 These two venerated shrines, both recently cited in the news, have been the objects of intended and de facto cultural misappropriation and cancel culture. In fact, what each has experienced has been marked historically by those in succeeding generations, under the guise of expediency, to ‘remake,’ expropriate, repurpose, or vandalize for their own technical, religious, artistic or social narratives.

I am using the phrase ‘cancel culture’ to describe an individual, class of elites, or political/religious group whose intent is to demean, shame, dominate and belittle others who do not share their extreme point of view. We should boycott these groups when they force their intractable views on others. They insult our intellect and sensibility.

In the case of Hagia Sophia, the Turkish government has decided to change the status of the once Christian church, which was reverted to an Islamic mosque, and then to a neutral cultural monument (“museum”) —and now back to a mosque. 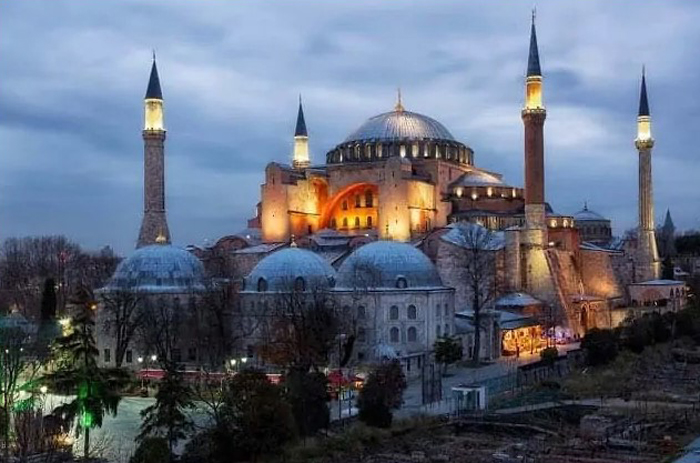 Hagia Sophia was built in AD 537 by Byzantine Christianity. It had the largest pendentive dome of its time (a circle constructed over a square) and was the largest Christian place of worship for almost one thousand years until the Seville Cathedral was built. When the Ottoman Turks overran Constantinople in 1453, those in charge found Hagia Sophia’s majesty wondrous and deemed it a fitting monument for use by Islam. The changes included the defacing and eradication of much of the iconography, paintings, and religious artifacts with the addition of four minarets and Islamic calligraphy, mihrab, etc. It remained a mosque for approximately 478 years until 1931 when the secular government of present-day Turkey converted it into a museum—cited as the most visited tourist attraction for the country in 2015 and 2019. 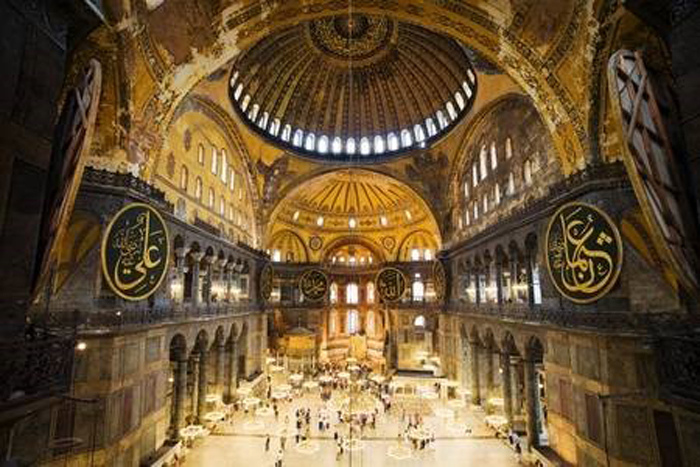 Now, 83 years after its museum status (which respected both faiths), Erdogan’s non-secular government has decreed it shall be a mosque once again. This affront on Western Culture and Christianity is not an expedient move, it is purely political. Immediate protests, especially by Orthodox Greeks, are calling it a “provocative action” among other things. The Greek City Times wrote: “Erdogan held true to his promise on Friday and Islamic prayers were conducted in Hagia Sophia to commemorate the day in 1453 when 30,000 Christians were enslaved, tens of thousands of civilians slaughtered and thousands of women raped.” Most likely in the near future every remaining religious image and statue will be scraped out and removed.

Of course, this action parallels the current cancel culture’s affront on all national monuments, not only attributed to confederate culture and history, but including figures that either supported the abolition of slavery or had nothing to do with it. The proponents seem ignorant of what they do. Zealots now wish to deface Christian symbolism as the images of a Christ, depicted as a ‘white’ man, are considered lies and historically white supremacy tropes. 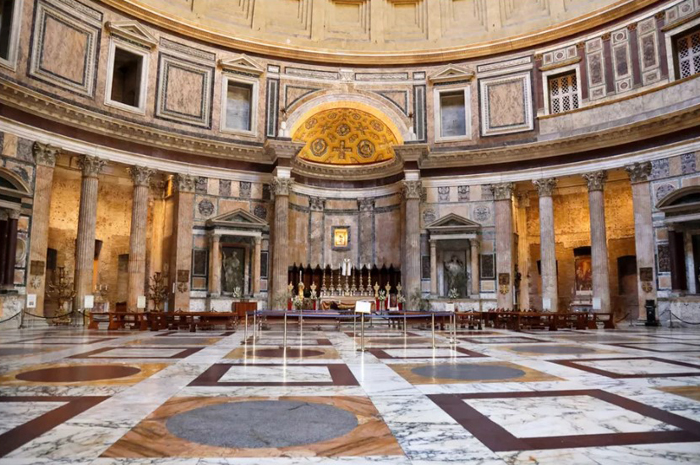 The reuse of existing building material for a new purpose has been a practice employed for thousands of years. City walls of ancient regimes and in medieval cities have be reused for private and public reconstruction. Marble columns and slabs were burnt for lime stucco or reused in Rome, and throughout Europe where practical. Columns from the distant Temple of Artemis grace the interior of Hagia Sophia. Older Roman ruins and structures were converted into churches, especially the basilica form which was best suited for Christian worship. Pagan temples were eschewed by Theodosius 1 but later, ancient temples dedicated to Greek and Roman gods were converted to churches again, one of the most famous being the Pantheon of Rome. These conversions though were not intended to show a superiority or preeminence of one religion over another, as the current re-conversion in Istanbul. 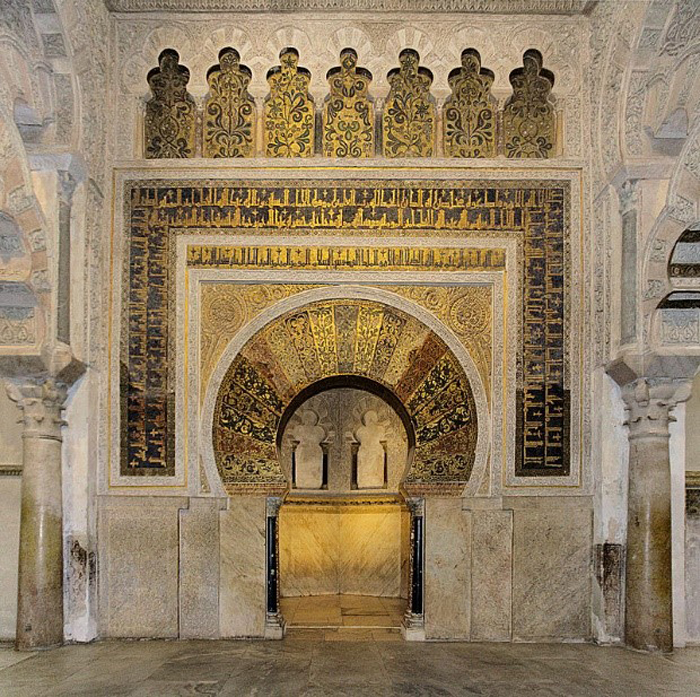 Possibly the most famous transformation of a mosque to a Christian house of worship was enacted in 1236 in Cordoba, Spain. Of course, that was 784 years ago. The site was first thought to have been a Visigoth Basilica which was converted in 784 by Abd al-Rahman. The unmarred remains of the Great Mosque of Cordoba showcase 856 Roman columns and capitals (recycled materials) made of jasper, marble, granite, and onyx. The Mihrab was untouched in the conversion to a Catholic church, as well as the ornate calligraphy, mosaics, carved wood and colored glazing. 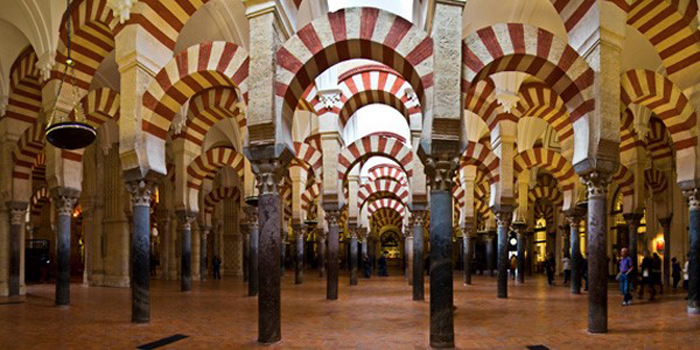 The potential conceptual reconstruction designs of Notre Dame suggested by contemporary minded architects might not be quite as obvious an affront to religion or culture, but on closer inspection it may be construed as such. A fire engulfed the cathedral on April 15, 2019. Before the embers were barely extinguished it seemed that immediate proposals by modern architects started pouring in. 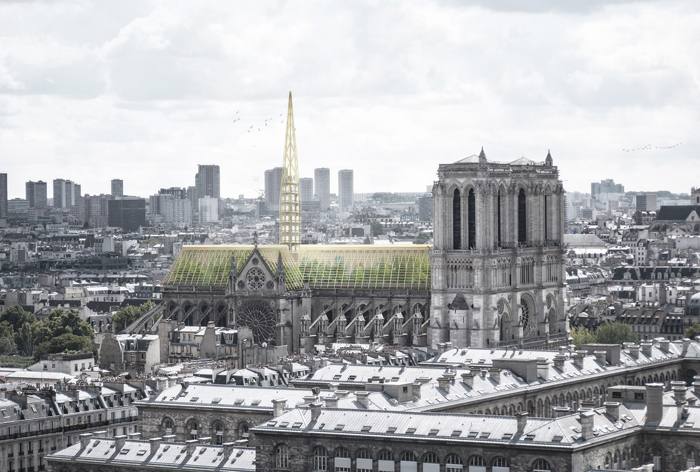 Macron was originally interested in having the heritage site rebuilt “more beautifully.” Exactly what that implied was clear when a series of modernist solutions were hastily put forward. Like a slew of modernist/decon “interventions” on historical buildings requiring remodeling or additions which have been ill conceived in public buildings in major U.S. and European cities (see Bundeswehr Museum of Military History in Dresden below), the solutions ranged from whimsical swimming pools on the rooftop to greenhouses (above).

The imposition of the modernist architect’s vision on historic buildings is not just an individual ‘statement’ of technological rigor but a show of political and aesthetic superiority. These modernists are really saying that the old is not good enough anymore and not worth preserving intact, as these monuments were founded on potentially racist and politically detrimental policies. (This is a rather recent argument based on current political themes, but otherwise simply a tacit show of force against Traditional architecture.) Further these out of date buildings representing imperialist conceptions should not be preserved intact but must be marred and urinated on to set an example. These interventions are clearly attacks on Traditional classical and other historic period architecture. 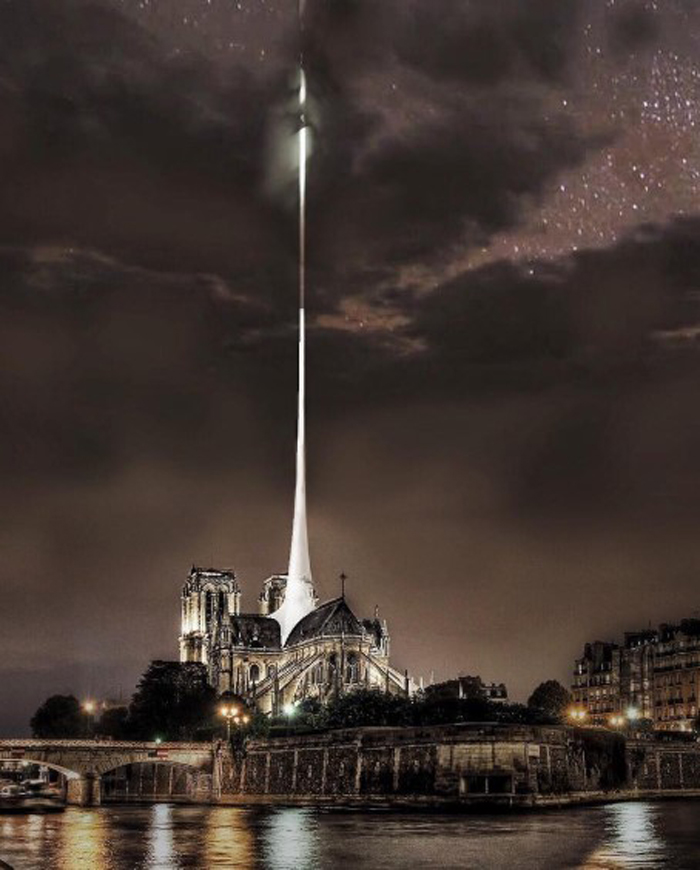 In early discussions on which approach to take on Notre Dame’s reconstruction, an architecture and historic preservation professor from the University of Pennsylvania wrote: “I think the problem is that architects want their intervention to be visible . . . they see the creative act as highly visible. But the best restoration is that which is invisible.” Apparently, the French population agreed by more than 50% with that view, while only 25% desired something daring and contemporary. (This, in light of studies indicating that interest in religion in France had dropped to a historic low. At least they recognize the value of keeping their original heritage monuments intact.)

The recent final decision by Macron is to have the reconstruction follow the exact structural and aesthetic design of the original. 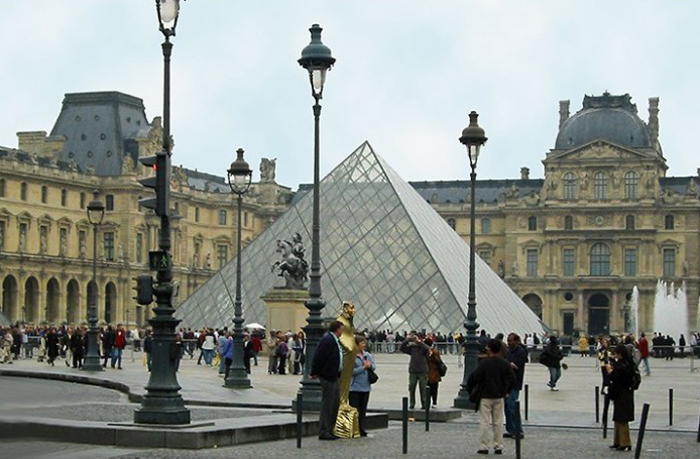 The negative reaction to these modern proposals in France is probably due to the long-lasting deleterious psychological effects of the imposition of an over scale glass and metal pyramid in the heart of the Louvre, one of the most indiscreet acts of artistic and political malpractice by Modern architecture on a culturally important historical building. In this case, a Renaissance inspired classical palace and courtyard built and adorned by French architects and sculptors was essentially raped by a cleverly masked “cultural icon,” an Egyptian pyramid form. It has been suggested that Mitterrand was a synarchist and was engrossed by the occult. Yes, France ordered multiple expeditions into Egypt, starting with Napoleon in 1798, and was enamored by her land, secrets, and antiquity.

So here you have an American architect of Chinese origin designing a monument for the French people in a sarcophagal style of ancient Egypt. A wonderful act of diversity! 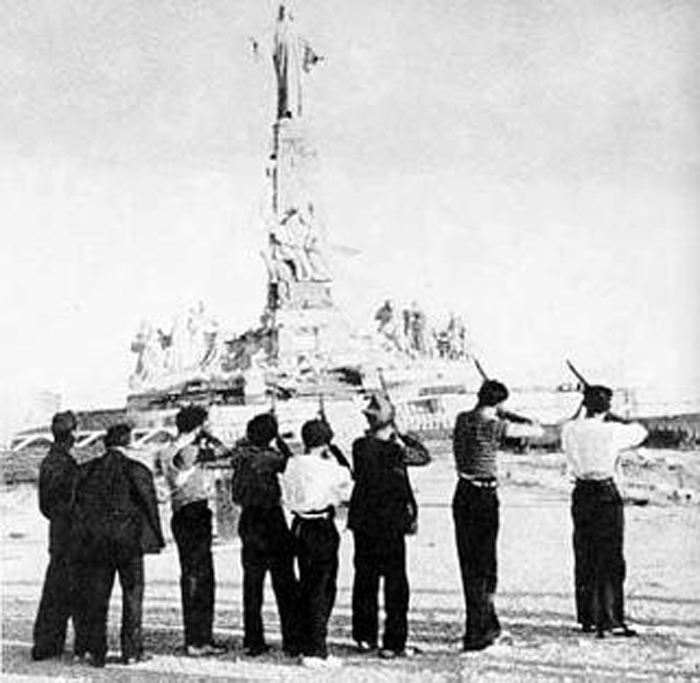 Outright religious and cultural desecration has been witnessed during wars recent and in the past. Hatred of rivaling religions in the Middle East has led to shrines being demolished and artifacts pulverized. This has gone on for thousands of years. Political symbols of the vanquished, as at the end of World War II, are typically taken down and sent to the rubbish heap. Mosques were destroyed in the ethnic cleansing campaign in Bosnia. In 1936 leftist militia fired upon the Sacred Heart monument near Madrid during the Spanish Reds’ war on religion.

What we have now in this country are acts of political desecration to further a Marxist agenda under the guise of BLM. The wanton and almost unopposed actions by anarchist mobs follow the comparable examples cited above and are meant to impose a social and political view by the unelected minority onto a majority through fear and terror. 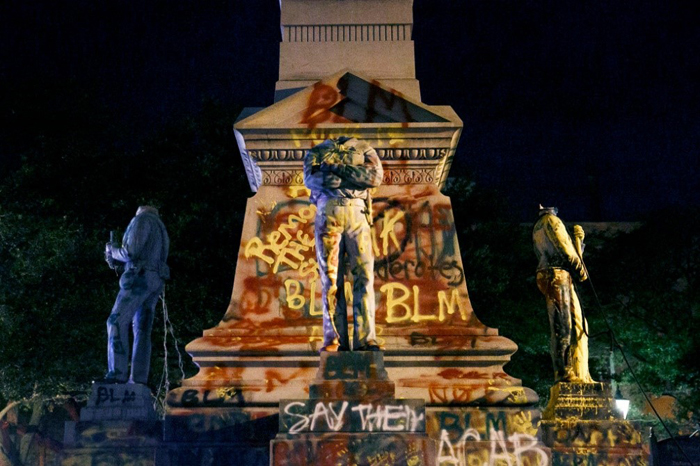 Modern architects, on the other hand, through clever mesmerizing rhetoric and iconic presence, an unwavering support by leftist art intelligentsia/media, and ‘logical’ appeals to take full advantage of current construction methods and materials (and pursue climate ideals), have been winning the war on Western history and art/culture without paint splatter, toppling of monuments, or shells being discharged.

The Port House in Antwerp (below right, designed by Zaha Hadid) is an overt criminal act, crowning and demoting Belgian culture and history with an alien aesthetic that is monstrous, out of scale, and dedicated to crushing the spirit and sensibility of the local citizenry. It was proposed to and accepted by elites and built by peaceful means, albeit at enormous cost to the public coffer. 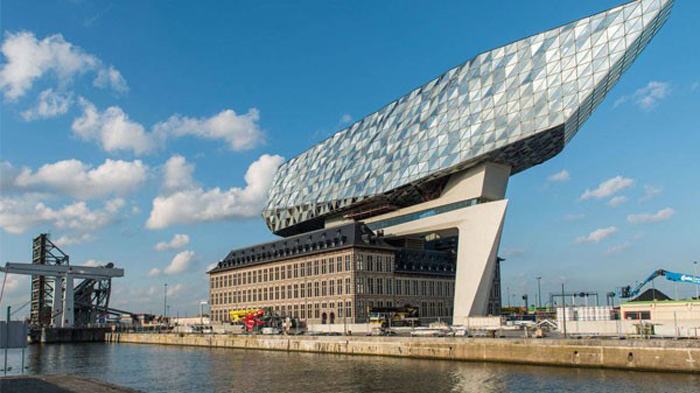 The Port House is representative of artistic and political misappropriation—the cancel culture ethic of modern architects of the last 100 years beginning with the ‘International Style’. Modern architecture has been with us since the 1920s and was introduced originally as an innocent expediency—to rebuild cities devastated by war. The movement, allowed to fester for a century now, has overtaken any other sensible approach to construction.

Completely absorbed and heralded by the universities after seeing how developers were clamoring for the boxy and inexpensive to build unadorned designs in glass and steel, this construction aberration is now the only accepted method of design and construction worldwide.

Notice how acts once seemingly practical, proper, and even moral can evolve into artistic and political movements that become subversive and destructive to the streetscape, mind and body. The slightest twist away from normal, if shockingly novel deemed expedient, is unequivocally announced the most important and worthy innovation in art representing a timeless ‘progress’ and reflection of the zeitgeist. 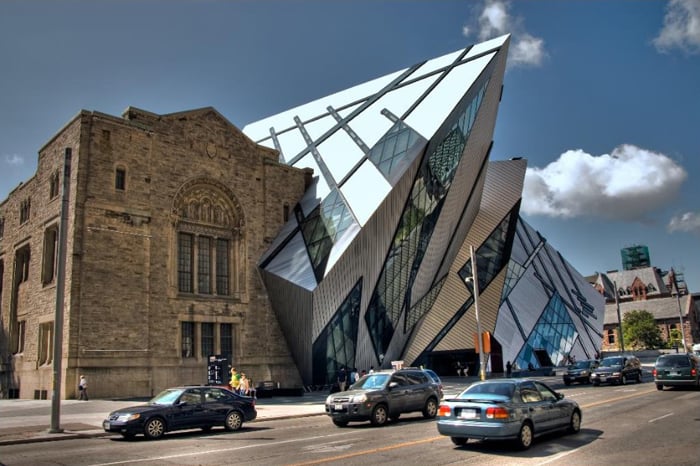 One cannot argue against these outrageous designs in academia while the architectural critics, like the bobbing heads on the alphabet channels, all nod in complete agreement. If one offers any blowback, they are deemed backwards and now (due to Trump’s interest in reintroducing the Traditional public architecture of the early Republic) you are labeled racist and a white supremacist. This is the same indictment repeated against any of Europe’s right leaning governments who wish to usher in their national period style architecture, now condemned for echoing their “imperial” or white race dominated past.