Crabs in Lemon and Butter 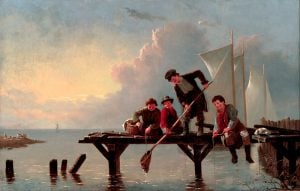 Rebecca no longer went crabbing at the long bridge in New Smyrna for the simple reason that it was over-crabbed. Too many people—retirees just like her—spent the day lowering crab nets down into the water, then periodically pulled them up to see if there were any blue crabs caught in the traps. Weekends were even more crowded with either crabbers or fishermen festooning both sides of the bridge, so that one was lucky if a body caught three crabs on a Saturday or Sunday.

So, Rebecca, with a lot of time on her hands now that her husband had passed away and, having few hobbies anyway, had explored the crabbing along every bridge between Melbourne and Daytona Beach.

She had found a great spot, an out of the way creek, rather wide, not too far from Titusville that had become her favorite crabbing spot where the blue crabs were always big and juicy and so many that she could fill up a full bucket in one morning with only six traps.

And this is where she was today, patiently tying the frozen chicken necks and the leftover ribs of last Thursday’s meal to each net. The traps were simplicity itself, two metal rings connected by a net, with the circular “floor” of the trap likewise a net. The bait was tied to the center spot and lowered into the brackish water by a string. When resting, the whole contraption was flat, but when pulled up quickly, the trap became an inverted cone. The trapped crabs, up to four in one net, could not climb out because their legs went through the mesh, dangling in the air. There was no way one knew if there was a crab present or not, one simply pulled up the trap periodically to check. Speed did not really matter, anyway, crabs were stupidly, brutishly persistent in the greedy scavenging for carrion and victims, so that if a trap was pulled up prematurely, the crab was not scared away, but, rather, would approach and enter the trap once it was lowered again.

Rebecca prepared six traps, three on each side, lowered them and tied the strings to the railing, so they would not be swept away by the mild, yet steady, current. She then walked back off the bridge and settled down on her folding chair and turned on her portable radio. Although she had brought a book along to read, she did not pick it up just yet, but, rather, looked around at the flat, deserted surroundings, scrub, palmetto, some trees. The road was curved on one side, leading to a bar—shack, really—way off down the road, the only inhabited structure for a few miles around, which she had passed by many times.

After about ten minutes, she got up to inspect the nets. Any crabs trapped would be the ones lurking nearby, while later ones would be the crabs attracted to the grease drifting slowly down current.

The second, third, and fourth net each had a very big blue crab in it. One still kept eating away voraciously, ignoring her, trying to pick the bone clean. Rebecca dumped each crab into the bucket, where they promptly began to viciously attack each other with their pointed, jagged claws. Anytime that she lowered her face towards the bucket to see them, they would spastically offer up their open, sharp, blue and white pincers, ready to tear off the flesh from her face, gouge her eyes.

The one bad thing about this spot, she mused after lowering back the nets and slowly heading back to her chair, was that she had never caught the odd fish in the net. Back at the New Smyrna bridge, she had occasionally caught a mullet or flounder. It, then, had joined the crabs for her meal.

Her husband had always loved the way that she prepared the crabs: killed in boiling water, cleaned, legs and claws separated from the body, shell split in two, then the halves and claws cooked in a huge saucepan with salt, lemon, butter, garlic and the occasional chives. Messy, though, very messy. But filling! And delicious!

Rebecca listened to the news, then a bit of music.

She got up again and, one by one, checked the nets. This time, each had at least one blue crab in it, all of them huge ones, they must have been feeding well lately.

It was when she was lowering down the last net that she noticed the odd shape in the water, perhaps because of the angle of the sun’s rays that early in the morning at that time of year. Rebecca was not too certain; her eyes were not what they used to be. She had never noticed it before and she was curious. Walking off the bridge, along the water’s edge for a full minute, she peered at the shape and ascertained that it was a car. At first, she thought that it might be an instance of the owners of a lemon, getting rid of a useless piece of junk in order to get the insurance money, callous as to the polluting effects on the creek. This is not as outrageous as it might sound, since abandoned rust-eaten cars can be found in the middle of any field of Florida palmetto scrub for this very reason. Yet, she felt uneasy about her discovery and felt that she had to report it, just in case, that she was duty bound to do so.

Accordingly, she took her cell phone out of her car and dialed the highway patrol. To her surprise, less than ten minutes later, a trooper showed up and she pointed out the general direction of what she had found (by now, the bright Florida sun’s rays had shifted angle).

He confirmed that it was a car, probably another abandoned lemon. Less than half an hour later, a tow truck had shown up, driven off the road and into water’s edge and was pulling the car up, as Rebecca, quite calmly, went on with her crabbing. She absent-mindedly noted that the car seemed to be not as obviously decrepit as some of the ones she had seen before elsewhere.

Since the men were busy talking to each other and doing their jobs a long way off, she picked up her novel and began reading where she had stopped reading.

The policeman radioed in the car’s license plate and found that the car, along with its owner, had been reported missing over a week ago. One of the men then pointed to the water and, in minutes a second car—this one compacted—was pulled out.

All cars, and their owners, had been reported missing. There even seemed to be more under the wide creek’s muck.

The patrolman reconstructed in his mind what had probably transpired.

On different occasions, the men had gone drinking at night at the bar down the road, had gotten drunk and, once on the road, had overshot the curve and into the creek where they had all died, either from concussion, or drowning upon being trapped inside their cars. Over time, the cars had piled up, sometimes one upon another, pressing down the previous heavy vehicles deeper into the water and slime. There was no telling how many more there were still down there.

Rebecca looked up and was mildly surprised at seeing all the wrecks on the far bank and was indignant at the callousness of people who would pollute a stream just to get rid of a lemon. In truth, though, her vision was so blurred and the angle of the sun had shifted so radically, that she only conjectured they were cars; she could not pick out the details, there was now so much glare reflected from the water, on top of everything else.

Realizing she had gotten too engrossed in her novel and that she had neglected her nets, she rose to inspect them. One by one, the traps had, at least, one big, fat, blue crab. She chuckled, dumping the last one in her bucket, before returning to her book and her radio. She glanced up at the hub-bub, but could not make out all the details, once again shaking her head in disapproval of folks who would pollute Nature’s creeks for a little bit of insurance money and, in the process, ruin such a perfectly good crabbing spot.

The officer, in the meantime, had finally succeeded in prying open the first car’s door in order to try to obtain further information. In doing so, half a dozen crabs scurried out of the car as a decomposed corpse fell out.

Armando Simón is the author of Very Peculiar Stories, When Evolution Stops and Wichita Women.