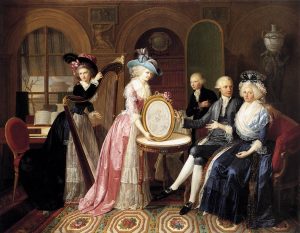 Portrait of the Villers Family by Jean-Bernard Duvivier, 1790

“It is a wonder how a people as inherently obnoxious as the French can nevertheless create beautiful art.” —Fyodor Dostoyevsky

From approximately 200 B.C. through the 1600s, Latin was the international language of communication in Europe. It was also an elitist language after the fall of the Roman Empire in that only those who were educated were privy to it at a time when both education and literacy plunged for the population of Europe, whereas during the Roman Empire literacy was widespread. Both ecclesiastics and intellectuals used it to communicate with each other and wrote their works in Latin.

The reasons for the widespread use of Latin, as a carryover from the Roman Empire, were several: (a) the Catholic Church, having come into being during the days of Rome, continued speaking Latin even after the barbarians had shattered the empire (b) the barbarians recognized the obvious superiority of the Roman culture and knew that they were backwards and one way to minimize this inferiority was by being able to speak Latin. Therefore, speaking Latin was a mark of superiority (c) later, during the early Renaissance, many of the long-forgotten histories and poems of Rome were rediscovered, which energized Europe and galvanized it out of the stagnant Middle Ages since it was deeply believed that everything worth knowing had already been discovered by the ancients. So, everything Roman and Greek was seen as superior to the current society; contemporary paintings, operas, poetry, theater, etc. more often than not alluded to Roman mythology or historical characters. In short, Europe became obsessed with ancient Greece and Rome and the study of the classics in the original Latin was de rigeur into the first quarter of the 20th century.

Anyway, the point is that the local common language was seen as unsuitably vulgar for intellectual matters (remember that Europe, like the rest of the world but totally unlike North America, has always been very class conscious).

Toward the end of the 1300s, partly because of politics and partly because of French literature, the French language began to coexist with, then slowly supplant Latin as the international language of Europe among the aristocracy and the political and intellectual elites (Petrarch, in his Invectives, rails against French cultural influence). In one sense, though, it was less elitist than Latin in that it could be learned by anyone and without a formal education simply by living, or visiting, France (which was not the case with Latin, since the Roman Empire had disappeared in 450 AD).

In another sense, though, French was elitist: it was the lingua franca of the aristocracy in all of the royal houses of Europe. The ruling aristocracy of Russia, Germany and Scandinavia spoke French among themselves in their private lives while some members did not even know how to speak their own countries’ native languages—nor wanted to; those languages were considered to be too crude and unsophisticated as opposed to the nasal French. After all, they knew that this was true because the French told them so (Frederick the Great, that quintessential Prussian, wrote his histories in French). At the same time, French culture began to be aped by other countries’ ruling classes.

Gaston Dorren has pointed out that the French thought their language was created in “the pinnacle of logic.” One French dictionary, published in the 1950s, stated that the French language was “an unsurpassed creation as a vehicle for the mind.” It is no accident that the word “chauvinism” originated in France—to describe the French.

The aristocrats’ disdain for their countries’ languages began to slowly dissipate in the 1800s with the rise of nationalism. Then, early 20th century saw the rise of English to initially be on a par with French, then to supplant it as the international language, not just in Europe, but worldwide, thereby having a larger influence than French ever did.

Ever since the second half of the last century, though, the French have been in the ridiculous position of declaring war on the English language, frantically purging their language of any English word that has come into common use, fearing contamination of their precious language. In fact, during that period of time (and, arguably, up to the present), the French based their national identity on being anti-American and anti-British, which if one stops to think about it, is a pretty pathetic basis on which to base one’s national self-identity (not to mention the fact that if it were not for America and Britain, many French today would be eating sauerkraut). The basis for this was two-fold: (1) De Gaulle—because of past personal grievances—based his foreign and national policy on chauvinism, which (2) dovetailed nicely with the sizeable French Communist Party and made anti-America a cornerstone of the Communist anti-NATO efforts pursued by the Soviet Union. (3) There was also the enviable fact that English had, and has, become the universal language of communication in business, diplomacy, science and travel, thereby supplanting the French language. Furthermore, in some countries that were colonized by the British, the English language serves to hold together the various ethnic groups.

The French, being incurably chauvinistic, deeply resent this usurpation and dream of their language’s restoration to its rightful place of domination over all other languages. Towards this end, the French have attempted to arouse nationalistic resentment in other European countries by claiming that each country’s uniqueness is being trampled upon by “the Anglo-American cultural onslaught.” So, when some French (like Marine Le Pen) whine about English supplanting local languages, and “Anglo-Saxons” in general, they really mean that English has supplanted French hegemony. However, they should take heart that Romanians and South Americans still think that learning French is important.

What makes the French effort to eradicate English words, even technical terms, from “contaminating” their precious language so infantile—they created the Commission Generale de Terminologie ed de Neologie in 1996 for just this purpose—is that they seem to have overlooked the fact that almost a tenth of the words in English are French in origin because of the Norman conquest of 1066. Indeed, notice how many of the words of Commission Generale de Terminologie ed de Neologie are instantly recognizable in English, though the pronunciation and spelling are different. Indeed, if English speakers wanted to be as equally infantile as the French, they could complain that the English language has been “contaminated” with French words (actually, English has incorporated numerous words from many languages—and is richer for it). Notice also, that the French language has incorporated many Italian words, yet they seem to have no problems with that fact (the Italians are not as resentful as the French),

The chauvinistic French aside, English has become the de facto intercontinental language of communication in the sciences, business, travel and politics. A German scientist can speak with an Argentinian scientist in English. An Italian businessman can speak with a Japanese businessman in English. An Indian pilot can communicate with an Egyptian airport in English. A Hungarian diplomat can communicate with a Norwegian diplomat in English. Even the European Free Trade Association uses English as its official language even though it does not contain a single English-speaking country.

And that infuriates the chauvinistic French.

Armando Simón does not speak French, but does speak English, Spanish and Italian, and is the author of The Book of Many Books, Orlando Stories and This That and the Other.

PrevA Life in Dreams
Crabs in Lemon and ButterNext