Deception: The Making of the You Tube Video Hillary and Obama Blamed for Benghazi 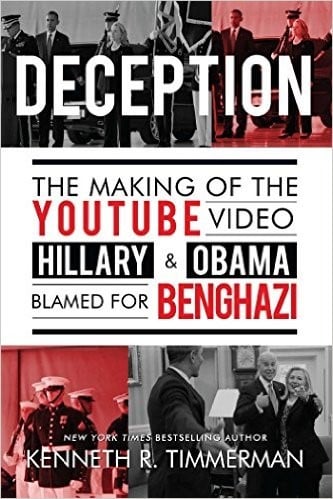 Deception: The Making of the You Tube Video Hillary and Obama Blamed for Benghazi
By Kenneth R. Timmerman
Post Hill Press. July 19, 2016

Veteran investigative journalist and bestselling author Ken Timmerman has a riveting new book Deception: The Making of the You Tube Video Hillary and Obama Blamed for Benghazi. It is the Kafkaesque ordeal of Cindy Lee Garcia, an aspiring actress and lay preacher from California and her undeserved 53 seconds of infamy in a “cheaply made internet video,” Innocence of Muslims hosted on YouTube on the subject of Islam and Mohammed. The 14-minute trailer for the two hour film that Democratic Presidential candidate former Secretary of State Hillary Clinton and President Obama suggested spawned the deaths of four Americans in Benghazi on the night of September 11th at the Special Mission Compound and CIA Annex in Benghazi. The four dead in attacks were Ambassador Stevens, security aide Sean Smith, and two CIA security officers, Glen Doherty and Tyrone Woods, both former Navy SEALs. Timmerman makes the case in the book’s afterword that the Benghazi attacks may have been planned and supported by Iranian Quds Force operatives disguised as a seven man Iranian Red Crescent team that included a Hezbollah operative.

Garcia awoke on the morning of Sunday, September 15, 2012 to discover she was being vilified globally via the internet and social media. This was compounded by the Administration which tied the video to death and destruction across the Muslim world in revenge for defaming their god Allah and his messenger, the prophet Mohammed. The destructive episode nearly surpassed the trail of death and destruction of the Danish cartoon incident of 2005 and 2006. All this was due in large measure to the Administration’s campaign suggesting the 14 minutes of the film produced by Nakoula Basseley Nakoula, a Coptic American, was the cause of death of four Americans that night in Benghazi. Nakoula was subsequently jailed on the pretext of violating his parole. Nakoula had dubbed in the anti-Islamic language during post production with Garcia and other actors. In this gripping novel-like tale, Timmerman uncovers the story of the making of the film.

Ms. Garcia and other actors in the production responded to a screen call about a film of desert warfare 2000 years ago. Instead, in a parallel deception by the film’s producer, the real objective was to reveal the barbaric biography of Mohammed. Timmerman follows Garcia’s ordeal in a $2 million legal contest with her legal team pitted against Google YouTube seeking her legal rights to take down the fraudulently produced film from social media. That culminated in a February 26, 2014 hearing before the US Ninth Circuit Court of Appeals in the matter of Garcia v Google that ruled in her favor by a vote of 2 to 1 granting her request to remove the video. That unleashed an immediate filing by Google requesting an en blanc hearing before the full US Ninth Circuit Court of Appeals in May 2015. The legal representatives of the social media giant were buttressed by a host of amicus briefs by other media and the ACLU. They contested the initial ruling was an infringement of their free speech rights. The majority of the Ninth Circuit judges reversed the earlier decision. The decision by the en banc US Ninth Circuit court on First Amendment free speech rights ironically condoned combating religious criticism. That was sought under UN Human Rights Council Res. 16/18 the stealth blasphemy strategy of the Saudi–backed Organization of Islamic Cooperation. As Timmerman points out Clinton had supported the UN resolution combating criticism of religions during a State Department sponsored conference in December 2011.

The cause of the protests in fact had little to do with the “cheaply made internet video.” The protests at the US Embassy in Cairo were organized by the Egyptian Muslim Brotherhood and the brother of Al Qaeda leader Ayman Al Zawahiri. They and others in the Muslim Ummah were seeking the release of the blind Sheik Omar Abdel-Rahman convicted and imprisoned in the US for his role in the 1993 New York Twin Towers bombing that antedated 9/11. Timmerman takes us through the bizarre twists and turns of the jailing of the film’s Coptic Christian producer, uncovering the bizarre financial dealings that funded the project. It is a cautionary tale that is now in its second printing following on its July 19, 2016 publication.

An afterword in Deception addresses a new possible deception combating allegations by Timmerman in his 2014 book, Dark Forces: the truth about what happened in Benghazi. He contends the deadly attacks were planned and orchestrated by Iranian Quds Force (QF) operatives. As Timmerman wrote in Dark Forces, the team of seven QF operatives entered Benghazi in late July 2012 disguised as Red Crescent workers and were alleged to have been kidnapped by Ansar al Shariah militia and released in early October. We thought that Rep. Trey Gowdy’s House Special Benghazi Committee final report would have revealed what those Iranian Red Crescent workers might have been doing there over the period of the attacks on the Special Mission Compound and CIA Annex. It did not.

Timmerman wrote in a New English Review article in September, 2014 about ex-CIA acting Director Mike Morell responding to a question at a Pensacola Tiger Bay Club presentation on September 15, 2014. Morell denied any Iranian involvement in the Benghazi attacks earlier that month. The question was:

[Long pause] So. There were no Iranian operatives in Benghazi. There were no Hezbollah operatives in Benghazi. I can tell you that with great, great certainty. The people who showed up at the State Department facility that night were a mixture of folks who just wanted to cause trouble, folks who just wanted to have a good time, and Islamic extremists.

As to those Cairo riots, he noted:

And what happened in Cairo a few hours earlier was that there was a large protest and the protestors got over the fence and did a lot of vandalism, burned some vehicles at the embassy, and the folks in Benghazi saw that and said, hey, let’s do the same thing. That’s why it wasn’t organized, and that’s why there were large groups of different kinds of folks.

Morell was actively engaged at the White House in the aftermath of the Benghazi attack in editing the talking points crafted by Deputy National Security Council Director Ben Rhodes used by the Administration and Ambassador Susan Rice on Sunday talk shows that weekend about the “cheaply made internet video” being the cause of the attack. Based on the Clinton emails we know now that she was telling her daughter, Chelsea, on the night of the attack that it was likely an al Qaeda group attack.

Morell following his retirement became a consultant to CBS News, headed by the brother of Ben Rhodes and a managing director of the Beacon Strategies Group led by former Clinton aides.

Timmerman, in Dark Forces and subsequently, propounded the thesis that Benghazi may have been an Iranian state sponsored terrorist event. It may have occurred during Administration negotiations that led to the the Joint Comprehensive Plan of Operations in July 2015.

Timmerman notes several corroborating sources for his thesis including two Iranian intelligence defectors. He also cites a retired US Special Operations flag officer who was in charge of an intelligence unit for overseas liasion with intelligence officers in allied NATO countries, Israel and Arab countries. That is buttressed by a classified tasking memo from former Defense Intelligence Agency  Director Lt. Gen. Michael Flynn who wanted to know of Iran’s involvement in Benghazi. Timmerman cites Flynn’s request to intelligence units requesting, “An assessment of the tactics employed in al Qaeda’s reaction to and level of Iran’s Revolutionary Guard Corps Quds Force involvement in the US Mission in Benghazi Attack on 11 September.” The redacted nine page document and response memo was obtained by a Judicial Watch FOIA request. Gen Flynn in a phone and email exchange with Timmerman said: “I wasn’t surprised” by the contents of the memo, saying that the information on the Iranian Quds Force presence in Benghazi and their involvement in the September 11th attacks was “very predictable behavior based on previous experiences.” Former CIA director, R. James Woolsey commented to Timmerman, “If this document lays out the details of Iran’s involvement then it effectively could turn Benghazi into a state sponsored terrorist attack. That would significantly change the perception of what we have believed up until now about Benghazi.” Timmerman cites a former CIA Security officer saying that “Everyone knew the Iranians were in Benghazi, especially once the Red Crescent team from Iran was ‘kidnapped’ by Ansar al-Sharia; we knew about them and were tracking them.” The retired US Special Ops flag officer said:

They were actually Quds Force operatives. The kidnapping was arranged to make it look like they were being taken hostage, when actually they were being taken off the street so they could covertly direct the attack on the U.S. compound. The goal of the Iranian attack was to shut down the aid to pro-Western rebels in Syria coming from Libya and to punish the US for meddling in what they saw as their sphere of influence.

We know from liaison relationships with allied intelligence agencies that the Iranian Quds Force team in Benghazi was helping to prepare the attack on the diplomatic facility. The Iranians did the training. They organized the militia. It was a military, not your typical terrorist attack. The mortar fire was very accurate. They taught the militia how to zero in the mortars. They set up sophisticated surveillance of the consulate – and they did it all while they were “hostages.”

General Flynn said this information was widely distributed up chain by the CIA Chief of Base in Baghdad who as later threatened with sanctions. Curiously, a senior Hezbollah operative involved with logistics for the Benghazi attacks, Khalil Harb, was subsequently black-listed by the US Treasury for his involvement in Yemen.

What does it say about how widespread was knowledge about Iran’s involvement if CIA acting director Morell, Secretary of Defense Panetta, Chairman of the Joint Chiefs of Staff Dempsey, Secretary of State Clinton, the eight members of the Senate and House intelligence Committees and the Obama White House National Security staff were briefed on it. Perhaps this forced their resort to the thin reed of the ‘cheaply made internet video’ that allegedly triggered the Benghazi attacks and resulted in a death fatwa against innocent actress Cindy Lee Garcia.

To help New English Review continue to publish timely and interesting articles like this one, please click here.

PrevPPK
Josh Rogin, The Washington Post and the Clinton Campaign: One NetworkNext