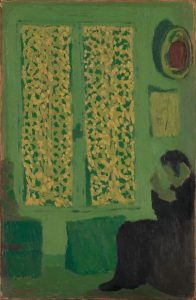 In 1957, when I was seven years old, my parents decided to move us to a larger house down the street, in the Flatbush section of Brooklyn. I recall visiting what was to become our new home for the first time, a few weeks before it changed hands.

The downstairs walls were painted a dark green, which gave the place the atmosphere of a deeply shaded forest. I had never seen—nor have I since seen—a house interior painted that color. My parents had the house repainted the standard, non-committal off-white, yet the memory of that immersive green darkness has remained with me all these years. The forest is mysterious and potentially dangerous, but also welcoming and enveloping. The owners—a couple named Salloway—were quite a bit older than my parents, and therefore truly old. Like the house, they seemed musty to me, but benignly so. They were forest denizens and I could not imagine them outside that habitat, in the unremitting brightness of that sunny day.

I can still picture them seated in their forest living room, pleasantly ‘embosked’ in its dark embrace. I highlight the word to call attention to my central concern here, which is the evocative and associative power of words and their capacity to convey us from the mundane through to the fascinating, the fanciful and, beyond, to the fantastic. But it is not simply a matter of words leading to words and to other words—though it is partly that—but of words mediating our awareness and understanding, both of things and of people. And when I encountered embosk for the first time many years later, probably in high school, it set off associations that led, in short order, to my memory of the Salloways as they sat in their old armchairs, smiling warmly at me. And from those associations to many others, and to a greater understanding of someone, as I shall explain.

The name Salloway made an impression on me, in part because of its chance association with the darkness and mystery of the house’s interior, but also because of its own intrinsic qualities, its lilt and its phonological brethren: solo, allow, away. Especially away: Salloway / Sail away. / I want to sail away. Later years would see the list augmented with sallow: Sallow Sally sought to sail away, though she was not allowed.

But something else—something quite tangible—associated with the Salloways was to grab hold of my imagination and claim a permanent place there. When we moved in to the house and I went about exploring my new home, I discovered that the Salloways had left something strange behind, which was to become a sort of artifact: in the medicine cabinet in the powder room on the first floor there remained a half-empty toothpaste-size tube of ointment in its original cardboard box, which had deteriorated with age, bearing the strange name ‘Ointment of Icthammol.’ I thought it odd that they had neglected to take it with them or throw it out. (Even more odd was the fact that in the many years they lived in that house, my parents never threw it out either, even though the writing on the box bore the unappetizing information that the stuff was “effective in loosening the crusts of eczema.”)

I was a precocious reader, and took an interest in what might be called ‘incidental’ writings: instruction manuals, product labels, and the like. At some point, after a few years, I read with much interest, if haltingly, the writing on the box: ‘Ointment of Icthammol is obtained by the destructive distillation of certain bituminous schists, sulfonating the residue, and neutralizing the product with Ammonia.’ I removed the cap and sniffed the black goo within. It had an odd, slightly acrid, though not altogether unpleasant odor that was completely new to me, and which I would not have been able to describe at the time, but which I would now describe as redolent of coal tar.

How magnificently strange this language on the box was! So much so that I read it aloud to myself repeatedly over the years and, by dint of repetition, eventually committed it to memory, where it still remains, after 64 years. The memory of that passage, a bit of sui generis chemical engineering arcana, will remain fixed in my mind so long as my cognitive faculties remain reasonably intact. And for that reason, I think of it as a bellwether. When I have difficulty remembering it, when I have to search for one or more of the words, I will know that as Tennyson put it in his wonderful poem, Ulysses: I am “not now that strength which in old days moved earth and heaven.” But for now, I have it securely at hand.

Initially, of course, I had little understanding of the words, but gradually acquired an understanding. First, ointment, obtain, destructive, product. Somewhat later: distillation, residue. Then, only after several more years, bituminous, schist, sulfonate, neutralize, Ammonia. I developed a strong interest in science and technology and, in my early years, aspired to be a scientist of one kind or other. (My utter lack of mathematical aptitude would later put the kibosh on my scientific aspirations, although my interest in science and technology—if only as an outsider looking in—has continued to the present.)

At some point, I took a particular interest in geology, and had a large collection of mineral specimens, including, fittingly, Schist. My father told me—in a display of unaccounted-for technical knowledge—that schist (specifically ‘Manhattan Schist’) formed the bedrock of the eponymous island. He explained further that its prevalence on that island was the reason that tall skyscrapers could be built there without the need for the very deep pilings that, in most other cities, must be driven into building foundations—at considerable expense—in order to support the buildings’ massive weight. Outcroppings of the stuff are ubiquitous if you take a stroll through, say, Central Park.

Pondering the curious wording on the little box, I asked my father what destructive distillation was. My father was a real estate man with no background in science or engineering. Distillation—destructive or otherwise—was not his game. Yet he knew! It was a datum of technical knowledge outside his immediate ken. Yet, for reasons that are obscure, but perhaps not unknowable, it was of sufficient interest to him that he retained it.

His eyes widened and gleamed as he explained to me, with all the enthusiasm of an expert eager to share his knowledge with an interested layman, that destructive distillation is the process by which a raw material—a ‘feedstock,’ in chemical engineering lingo—such as coal, is fed into a suitable vessel and is then broken down through a combination of heat, pressure and various chemical reagents. He went on to explain how, at different temperatures and pressures, the process yields a panoply of hydrocarbon by-products: coke, coal tar, coal oil, and even Vaseline. (Vaseline! So that’s why they call it petroleum jelly!) His description was authoritative and proffered without the slightest hesitation. He offered this information with such vividness and detail that I assumed at the time that he was speaking on the basis of personal experience with the process or at least technical study. But he had no such experience and had undertaken no such study.

There was wonderment in his eyes as he expatiated, as if he had found magic in the technological process he was describing. Start with something base, dark, and heavy—they call it ‘crude’ oil for a reason—something whose value lies not in what it is but in what it can become, and then subject it to heat, pressure and chemical catalysis, and watch (and wonder) as ever lighter, more refined and ever so much more utile products are obtained. Though called destructive distillation, the process is in fact creative. (Or, rather, it is both at once, my recognition of which was an early encounter with the experience of irony, although knowledge of that word would not come until many years later.)

As to how and why my father had acquired this highly technical knowledge, utterly irrelevant to the conduct of his workaday life and quite outside his area of expertise, I can only theorize: perhaps, just as I was drawn to incidental writing, he was drawn to incidental phenomena, things fascinating in their own right without regard to any practical concerns. So, this knowledge, having brushed up against him as he drifted through life’s seas, clung to him like a piece of flotsam. I would discover over the years that he bore a plentitude of such flotsam. I seem to be similarly constituted and have continued in that tradition and have come to find it enriching.

To distill is to extract an essence from, but also, to ‘extract the essential meaning or most important aspects of something.’ It is, strictly speaking, not creation, because what you extract was in some way already present in the feedstock. Many years later, when I decided to study philosophy as a graduate student, I would learn the Aristotelian / Scholastic distinction between ‘actuality’ and ‘potentiality’. The potential is ‘real’ but not ‘actual’; the actual is the potential realized. In destructive distillation, the feedstock is consumed and its potentiality realized and made actual in the form of its distillates.

The theme of actuality and potentiality suggests this concluding excursus, which is more than incidental: my father was a man of considerable intelligence. Yet in his own eyes he had not actualized his potential. Like Marlon Brando’s Terry Malloy in On the Waterfront, he thought that he could have been a ‘contender’ if he had charted a different life path. But whereas Terry saw himself as a ‘bum’ (“cause let’s face it, that’s what I am…”), my father’s judgment of himself was not so grimly self-critical. In contrast to Terry Malloy’s outright shame, I judge that my father felt that his superior feedstock could have been—and perhaps should have been—wrought into a finer end-product. What I think he never fully grasped is that in the heat and pressure of life’s destructive distillation, with its multifarious exigencies, its many pitfalls, temptations and assaults, the constitution of one’s final distillate may turn out to be less refined than one might have hoped. But the saving grace is that as long as one lives, there is always more flotsam to gather, more words to explore, yet more distillation to be carried out and ever greater refinement to be achieved.

____________________
Peter Lopatin was born and raised in New York where he earned his JD degree and practiced corporate law for thirty years. Along the way, he studied philosophy as a graduate student at the New School for Social Research. After retiring from his legal practice, he obtained a Certificate from the New School in teaching English as a Second Language and has been an ESL teacher since then. He has taught at the University of Connecticut/Stamford, Norwalk Community College, Manhattanville College and, most recently, at the Stamford English Language Academy. Peter’s short stories and book reviews have appeared in Commentary, The Weekly Standard, The New Atlantis, and New English Review. His poetry has appeared in New Millennium Writings and Poetry East.