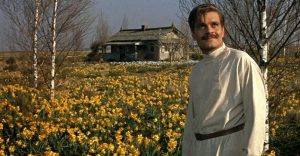 “I hate everything you say, but not enough to kill you for it.”
― Boris Pasternak, Doctor Zhivago

We received a call from Agata, a friend’s daughter, in Moscow the other day. Her father is an American economist and her mother is a Russian journalist. Agata, like her mother, is one of those Russians who have lost  faith in any near-term evolution of Russian/American politics.  A student, the girl called to assure us that she wasn’t attending any street demonstrations, dangerous on any day in her neighborhood.

Agata’s family is trying to leave Russia, for the moment abandoning their worldly goods, apartment and rural cottage. Their liquid assets, I’m sure, have already vanished. For me, their plight is like a chapter from Doctor Zhivago; educated middle class refugees fleeing from toxic politics, forces beyond their control, perils worse than Russian winter. Just a few short decades ago, I believed that my Moscow friends were living symbols of a new Russian American relationship, an overdue marriage of ancient Russian culture and American democratic capitalism. I was wrong.  My friends are not a metaphor for anything as ephemeral as civilization.

Today we are, yet again, at war in Europe. For the moment, Ukraine bleeds from wounds inflicted by American and Russian failings.

Let’s not pull any punches. This war is not between Russia and Ukraine or Russia and Europe. Like Vietnam, Cuba, Afghanistan, Chechnya, Bosnia, Libya, Syria, and now Ukraine; the conflict in Eastern Europe is another surrogate war between the United States and Russia. Vladimir Putin is correct about one thing, the EU and NATO are lemmings, subservient to Washington foreign policy whims.

With Ukraine, the stakes for Europe and America are now nuclear, if not existential.

Back at the turn of the Century, before Agata was born, I believed that the fall of the Soviet Union presented a golden opportunity to bring Russia into the western economic/political, if not democratic fold. Alas, that promise ran afoul of the leitmotif of American foreign policy, the belief that the USSR, now Russia, is an evil empire. As a Pentagon Intelligence mandarin once put it to me:

“We can’t justify Intelligence spending or the Defense budget with ragheads (Muslims) in Toyota pickup trucks or gooks (Chinese) selling Walmart junk or Nike shoes. The Russian threat may be a strawman, but it’s a necessary fiction. It’s no accident too that the Pentagon is the largest building in the country. Real war for the Intelligence Community and DOD is the Beltway budget battle. You could do worse than think of the Russian bear as an ally in the annual scrum over tax dollars.”

When I told a version of that war story to Agata in Moscow, she corrected my metaphor. “It’s a rat, not a bear. When you corner a rat, he jumps,” she said, reminding me of the yarn that Putin told about himself back in the lean years of Soviet to Russia transition, those euphoric Détente years. As a struggling apparatchik in St. Petersburg, a rodent once got into Putin’s cramped apartment.

Putin is fond of recalling that the rat attacked when cornered. With those few words, a Moscow schoolgirl in peril, captured the 2022 Kremlin casus belli, the Russian perspective. Rats jump, indeed.

It’s more than pointless to review the why or how we got to where we are today. The past is just indulgence, when the present is so perilous. To make matters worse, it’s not clear to me that we, as a nation, are capable of sober strategic reflection anymore. We seem to see all options today through the prisms of moral, cultural, and political arrogance and superiority. America is incapable of seeing another point of view in domestic or foreign policy.

Victoria Nuland, the permanent neo-Brzezinski fixture at the US State Department captured our Ukraine moment best: “Fuck the European Union,” she said during the sponsored Maiden coup of 2014. With that admonition, Europeans bent over collectively and grabbed their ankles – again.

Ganymedes do what they must when confronted by Gods. Alas, Uncle Sam is more than a bit of a strategic metrosexual these days too, albeit still calling the shots for Europe. Ironically, with the war in Ukraine, the White House has weaponized all things except the Pentagon and NATO.

At this point we all ought to be asking a question another Russian, Vladimir Ilyich Ulyanov, posed a century ago: “What is to be done?” The honest answer today is: not much. The Ukraine War ends when Kiev taps out or the Kremlin gets their security demands. Yes, hard as it is to accept; bombs still talk and bullshit still walks.

In many ways the two primary antagonists, Putin and Biden, are political brothers by another mother; each willing to make a point with surrogate body bags. Each also seems to be fighting for political survival – or legacy. Biden’s fate may be sealed as early as next November.

Between now and then, hope dies in slow motion.

Ironically, for Americans and the global lumpen proletariat, the exit ramp from Ukraine, at best, might be a global recession, if not depression. Weaponizing the US dollar might be the worst bad idea ever. Why turn off the lights and close the global kitchen to spite or undermine one man in Moscow? Why punish the Third World for Yankee stupidity? At worst, the off ramp from Ukraine is Armageddon. With that, those ice caps, polar bears, Teslas, and globalization will not matter much. Info copy to John Kerry.

Not that anybody cares at this point, but we should say something about motives or goals.

Clearly, Washington and Brussels want to expand NATO to the Russian border and beyond under some bullshit burka of “defense.”  The ultimate objective appears to be surrounding, crippling, and subverting Russia. Yes, even after the Maiden and Kabul fiascos, regime change is still part of the CIA tool kit. That American neocon goal has been remarkably consistent since 1948. What other purpose could American spetsnaz possibly have in Poland in 2022?

Special Forces and CIA black ops do not do “defense.”

Moscow for its part, sees America as an arrogant bitch who has seen better days, an aging madam willing to sacrifice surrogates, not American lives, to maintain global hegemony. The kinetic difference between Moscow and Washington is doctrinal. The Kremlin still believes in military victory. The Pentagon does not. Surely, Vladimir Putin must find it amusing to see western media whining about exits and off ramps after only a month of fighting.

Let’s end this sad discussion with one last anecdote. Recall that professional diplomat William Burns used to be our man in Moscow. In 2008, Billie sent a classified cable back to Washington with some prudent advice, “Nyet means Nyet” was the infamous subject line of that classified demarche. (Hat tip to Wikileaks)

Burns was trying to warn about the expansion of NATO to the Russian frontier. Needless to say, our ambassador’s yellow card was ignored. Today, Burns is the director of CIA where his days are spent sorting out the Havana Syndrome, global warming, and other existential strategic threats.

And so it goes as we slouch off towards the abyss. Good luck and God speed to Agata and her family.