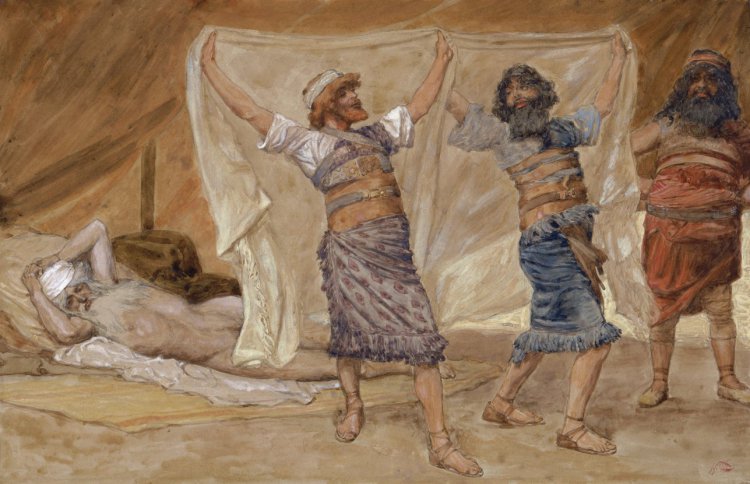 A small child learns to count. 1, 2, 3. When he reaches a decade of integers his eyes shine with pride. But there’s more, so he renews his efforts: 11, 12, 13. How high can you count? He brags to his friend that he can count to 20. To 30. Then the limit of his imagination is challenged: the numbers never stop. There’s something called “infinity.” I dare you infinity times to jump over that creek.

But you don’t stop at infinity, there’s always another number. Infinity plus one is still infinity. In fact infinity plus infinity is still infinity. In middle school, now, infinity has a symbol: ∞. And so treat it like other symbols in that loathsome algebra: ∞ + ∞ = ∞. Subtract ∞ from both sides. ∞ = 0? The world no longer makes sense. There is something grander than this finitude in which we live and move and have our being. Infinity is not just a large number. Eternity is not just a long time.

The concepts transcend our space- and time-bound reality. As do all concepts, really. Truth does. Not just a truth, but the concept of truth. And concepts of concepts: truth as an ideal; truth privileged over falsehood. So also transcendentals of morality, beauty, virtue, and their opposites. There is a dominion beyond this one we inhabit, else there is nothing to transcend, and we are hedged in forever by ghosts we cannot see.

Infinity and nothing. ∞ = 0. We try every way we can think of to overcome the ultimate incommensurability. They distill, however to two: embrace of the transcendent, even if the mystery of its aliveness eludes us; or rejection of it, so that we must explain the concepts, the abstractions, the ideals of ideals, in immanence. Other-world Being authoring this one, perhaps projecting an eschaton as purpose to history. Or this-world becoming, self-generating truth and value, in which history itself is the generative process. Eternality or temporality. There is a God of history, or there is History as god.

What if there is a God who inhabits infinity; eternity; who is ultimate Being? History then is a canvas on which He paints, not a living thing unto itself. Everything on that canvas, then, is contingent. Dependent on the absolute, the Painter. Good and evil are separable and incommensurate. Separated like east and west. And so also truth and falsity; virtue and vice; hope and despair. This is an all-or-nothing reality.

A contemporary musician, Andy Squyres, refrains “Either nothing is wasted or everything is” in his song Dead Horse. Heaven or hell. Purpose or meaninglessness.

Not that there is choice, mind. It’s all one way or the other. Either reality is God-infused so that all meaning, striving, and purpose is informed by His presence, or there is no right or wrong; no truth; no beauty; and no meaning or purpose to our lives at all. History as mere evolution of human thought is a weak vestigial hope.

That we tend to ascribe life to History rather than transcendent Source is not a matter of mis-wiring in the brain. We’ve been taught it. There was a time, in Western history, when the objectivity of truth was a given; when values did not change over time because they were understood to be hard-wired in the conscience by the Author of those values. But that time is not this time. We learned historicism from the Dialectic.

Friedrich Hegel was, like the French Revolution and the United States’ Declaration of Independence, a product of the Enlightenment. His dialectic explanation for history as a living thing was enormously influential. Most notably in the Marxist diamat which recrudesces in postmodern thought, but more generally in the reflexive historicism of this age. The ultimate expression of Hegelian dialectic is in resolving the dichotomy of Being and non-being into “becoming;” temporal process in place of eternality and the unchanging “being” of objectivity transcendently sourced.

Society therefore is thought to progress through history. Purpose and direction to history is not pulled along, so to speak, by a historical purpose outside of history. It is pushed, we might say, by dialectic process. The push is “progress;” adherents of this way of thinking “progressives.” We “progress” without identifying what we progress toward. It is a utopian vision, so just hang on and we’ll find out when we get there. It is a form of faith, but “faith” as secularists mis-define the word: belief without the necessity of an object of belief. In this way history itself takes the place of God. It is the reason modern political progressives will complain that a conservative policy “takes us backward,” or puts us “on the wrong side of history.”

Ideologies of historical process replaced transcendence and brought about the calamities of the twentieth century, the bloodiest century in human history. Postmodernism is administered as the cure, but it is a mutation of the disease itself, either by continuing to rely on Marxist dialectic, or by attempting new forms of process philosophy. Historicism is still regnant, and transcendence remains locked in the closet.

Suppose it’s not History that rules over us, however. Suppose it’s that other rumored God? It’s all or nothing. There’s a 2022 movie remake of Remarque’s All Quiet on the Western Front. It’s an anti-war book/movie so much of it is about the pointless waste of WWI, and the protagonist’s utter loss of innocence. Millions of lives lost, and Western civilization forever changed. This is the history we look to for breathing life into ideals. So also the holocaust of WWII, or the other mass genocides of the last century. We see depths of evil but continue to worship History. We have to understand that the evil corresponds to heights of glory we’re unwilling or unable to see. Either Auschwitz was a deep shadow to radiant glory, or all is Auschwitz.

You can think back on your life and about all the little and big moral failures along the way and try to separate out the good things from your history to put on the balance scales, as if you were standing before the Egyptian god Maat, willing the scales to come out in your favor but they never do; your misdeeds are weighed against a feather. So instead you re-imagine the scales. On one side you put your pathetic little pile of manufactured self-glory and finally see it is dross, while on the other side of the scale is the ineffable spark in you that you did not make. The finite weighed against the infinite. They’re incommensurable. Life is breathed into us and nothing is wasted, even our sins, and life has meaning. We choose life or choose death, there’s no in-between no-man’s land like the infamous one in Flanders.

Here’s how the message of transcendence informs us we’re not ruled over by History. A point of Christian doctrine for centuries has been that Christ descended into hell upon His crucifixion. It’s a part of a systematic theology to explain that what Adam representatively brought upon the human race, Christ has undone. A popular youtube/substack speaker, Jonathan Pageau, suggests that this idea radiates out into history, too, in that each generation in a sense redeems the previous generations, releasing it from blame for its treacheries and cruelties that have impact in succeeding generations. In this way the sins of the fathers are forgiven; the sons redeem the fathers. This is a way of understanding that puzzling episode in Genesis 9 in which Noah gets drunk and is lying naked in his tent. One of his sons sees his nakedness, but the other two take a covering in to him, backing in so they don’t see him. One son “sees” the father’s sin; he does not honor God by forgiving it. The other sons do not “see” the sin, but cover it.

The current generation has to forgive, to “let go,” so it can move onward without continuing to be weighed down by the faults of the prior generations, because this is the only way to move forward, to become better. There is no standing still, we get better or we get worse. If we entangle ourselves in our forbears’ sins rather than looking to objective and eternal standards, the God-breathed element of our humanity leaches out of us. If we forgive and seek God the downward fatalism of history is overcome. Not through misguided dialectic. Not with collective guilt.

As with sons and fathers, so with you and your former self. You are today “son” to the “father” of your yesterday. You can only move forward or backward, there is no standing still. You have to forgive your former self, to not be held back. In this way, you are redeemed from your past sin; in this way the sons redeem the fathers; in this way the present generation redeems the past generations. Not the dialectic way of modifying truth so there is nothing from which to be redeemed. And not the way of sacrificing to the collective the self that would be redeemed, as the dialectical false god History requires.

PrevIn the Road Bloody
Who Owns the Moon?Next