Does America Have a Problem with Racism? 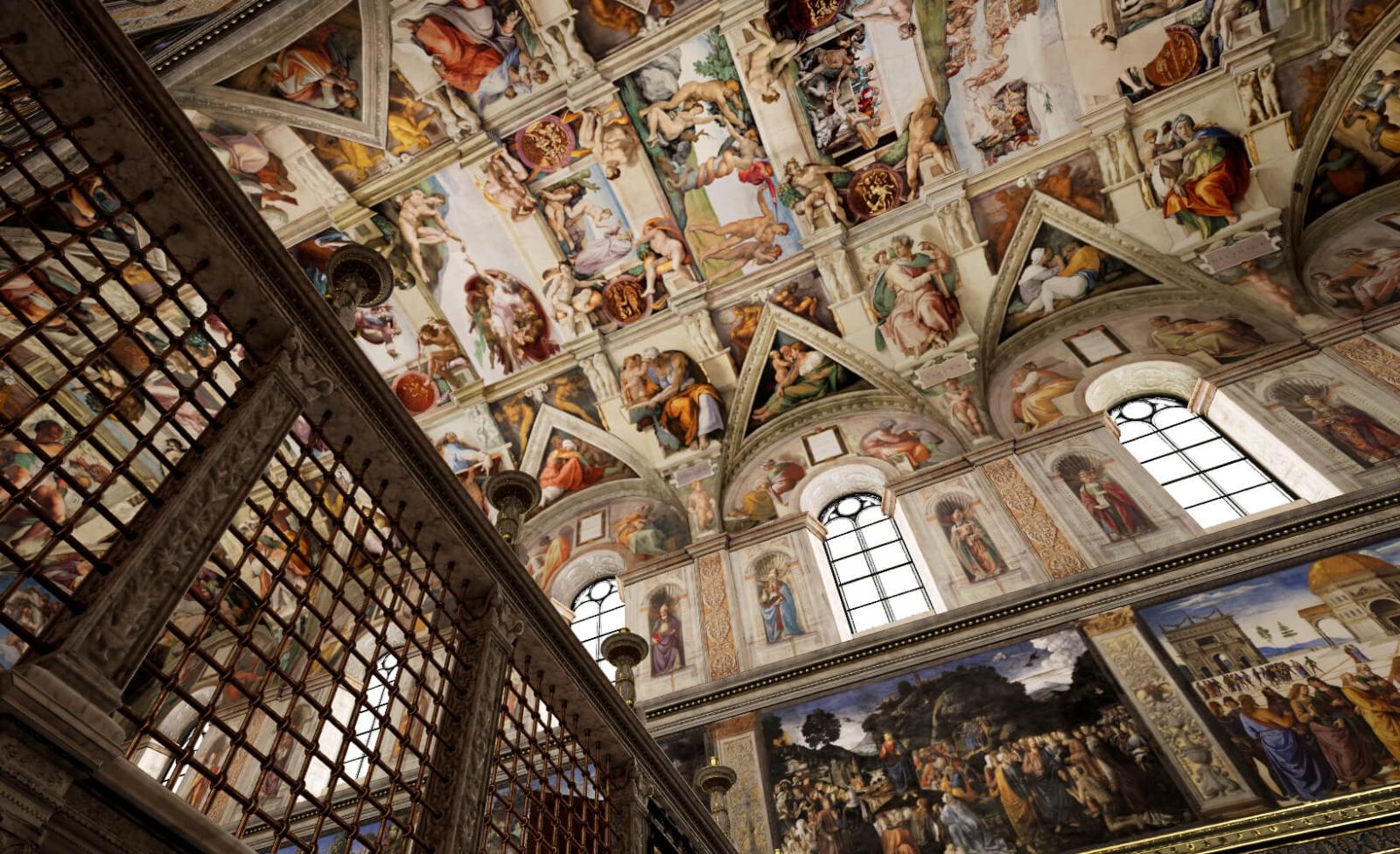 Portion of the Sistine Chapel

When you listen to fools, the mob rules! —Black Sabbath

Unless you have been comatose for the past decade, you have been aware of a tsunami of racism directed against white people, said racism being stoked principally by whites some of whom are communists. True, there are some blacks and some Mexicans who have expressed this racism, but—and I emphasize—it is principally by leftist whites. Some of these statements by liberals are so bizarre, so disgusting, that one could be excused in thinking that they came from certifiable psychotics.

This racism has in recent years been formalized in what is now called Critical Race Theory (CRT), having pretentions of an intellectual foundation, which is being used to indoctrinate children and the military, the latter case to possibly turn the military as a tool of repression of civilians in the future. “The anti-white theoretical kudzu” (as Ilana Mercer so perfectly described it) has even been espoused in corporations (Coca-Cola told its employees to be less white). Quite simply, the central basis for CRT is hatred and jealousy. And, whereas the main focus of hatred is white people, CRT is also damaging to Asian-Americans.

As an aside, part of the CRT is that there is “systemic racism” in America, rendering the country a racist hellhole where no black person could ever hope to own a business, make it big in Hollywood or television or in sports, or be a judge, mayor, governor, police chief, much less a Congressman, a Supreme Court judge or President. Which is why we should import more People of Color. And why so many whites try to pass off as black. Or other Persons of Color.

The racism against whites has been long in coming. For example, Joan Didion the leftist writer—whose face looked remarkably similar to an albino wildebeest’s—long ago claimed that only whites had created destruction in history, thereby demonstrating a colossal ignorance of historical events, so typical of leftists. The racism against whites goes along this way: whites are inherently evil, they have caused nothing but destruction and misery, nothing good is possible from them. All hail non-whites! (which actually means blacks and browns; nowadays, liberals also hate Asians) To anti-white leftists, whites have constantly carried out genocide against People of Color: Africans, Asians, Native Americans who were incapable of committing evil acts and who pranced through forests, deserts and prairies, at one with Nature, singing songs of joy. Blacks, in particular, are portrayed as gods walking among mere mortals so that whites ought to worship them. Some do.

Another pre-CRT racist was/is Sara Jeong. The overrated New York Times saw fit to endorse racism by hiring her, knowing (or probably because) of her history of racist remarks against whites, a characteristic that liberals consider to be, oh, tres chic, mon cher, especially if uttered by a minority. This hiring was solidified in spite of repeated condemnations of the national newspaper’s decision for hiring a racist, especially considering the newspaper’s supposed anti-racist stand. Mind you, the criticism was principally on the internet. No other newspaper or magazine condemned this obvious hypocrisy (which speaks volumes about American journalism). In fact, this hypocrisy was noted and shrugged off by newspapers, while other liberal outlets applauded Jeong’s hiring and her racism (Jeong has also come out in favor of censorship). When you consider the fact that The New York Times has come out in the past with articles favoring censorship and Communism, it’s not that surprising (according to The New York Times, women under Communism had better sex than in the West. Yes, they did! Really! Even in the gulag? Yes!). Before too long, we may see an article arguing the case for dictatorship—by liberals.

Because her ignorant assertions are so typical of today’s ignorant anti-white racists, including those pushing CRT, I will address myself to that. So, to Sara Jeong, and all of you other anti-white, CRT racists: I’ll be your huckleberry.

But before I unload with my six-shooter, ask yourself this question: why is it almost a crime to be proud of white people and their achievements?

One of the things that I find infuriating about conservatives is that most do not fight back. Whether it is being bashed on the head by an Antifa, having one’s religious items desecrated in the name of “art,” seeing someone burning the country’s flag, having one’s political yard sign ripped up, one’s political clothing ripped away, or having a lecture being drowned out in chants, the response has been head shaking with some whining about how liberals should let other people express their views. Letting themselves be victimized is being praised as taking “the high road.” Not to put a fine point on it, but many American men have become manginas.

And when some persons actually do fight back, the response from the manginas is that the responders are “sinking to their level,” while others claim that to do so is a waste of time and effort. while still others claim that violence has never solved anything. Better to be victimized, they say. It’s more noble. Should one mention engaging in physical confrontation, these individuals have the vapours.

I know that it is considered to be in bad taste to do so, but since many conservatives seem to be eunuchs who not stand up for whites I will do so. By my being Hispanic—and since liberals have decreed that speaking the Spanish language qualifies one as being non-white—I can get away with it; anyway, if the reader is offended by what I’m going to write—I don’t care).

And . . . most of these advances in civilization have spread to the Eastern hemisphere. In fact, one of the problems that America has is the rampant theft of intellectual property by Orientals. If an Oriental today came up with an original idea, he would probably have a heart attack from the shock.

And notice that, in the Americas and in sub-Saharan Africa, it was not just advanced, abstract, concepts like trigonometry, physics, or antibiotics, but even the simplest inventions like beds, tables, balloons, the wheel, glass, slings, soap, straws, the funnel, shoes, mirrors, wine, pinwheels, toilet paper, stairs, pants, safety pins, pockets, underwear, zippers, calendars, cheese, combs, buttons, the alphabet, numbers, or forks.

What great mathematicians, physicists, chemists, doctors can you name from Nicaragua, Ghana, Namibia, El Salvador, Madagascar, Guatemala, Haiti, Togo, Uganda, Panamá, Venezuela, Kenya, or Sudan? After more than two centuries, Haiti, Somalia, or Ethiopia are such pigsties that they still haven’t even come up with a sewer outside select areas of the capitals. This, in spite of  billions of dollars thrown yearly into the countries for “economic development” and “humanitarian aid” by our imbecile-ridden Congress (one wag defined “foreign aid” as when poor people in rich countries are forced to give money to rich people in poor countries).

What great inventions have come out from Africa (whether from black Africa or Muslim Africa)? From South America? Name one. Just one. What great abstract philosophical schools or scientific disciplines have come from those areas? Name one! Just one! What great scientific discoveries, what technological innovations, have emerged from Africa or South America? Name one. What medical advances have come from those two regions? Now, true, in Africa, the idea of killing and chopping up albinos and eating their body parts is seen as a medical advancement; so is cutting off a two-year old girl’s clitoris with a scissorscolonialist science.” And some still, to this day, practice cannibalism, while many others practice slavery.

Oh, yes, some Africans are killing and eating albinos while other Africans are killing children for their body parts, and a BBC crew was attacked by Africans who thought they were vampires. Oh, yes, and the doctors who are fighting ebola have been attacked and their clinics looted (in Sierra Leone they have a unique form of treatment for ebola patients: they jail them). There is also the practice of beating a girl’s breasts with a hot rock.

Oh yes, indeed, we have much to learn from Africans.

As for the field of military science, we could always consult with General Butt Naked.

In short, if civilization had been left up to the Africans, we would still be living in caves and huts—as many still are. And if it hadn’t been for colonialism, they would still be living in caves and huts, banging two rocks together as the height of their “civilization.” We forget that the people of North America, sub-Sahara Africa, Australia and most of South America were still in the Stone Age killing and eating each other when whites first encountered them. Facts!

Furthermore, it is interesting thing that, now that the black African racists carried out a policy of excluding whites from their countries, those countries have been steadily deteriorating.

With the exception of Wakamba, of course.

As for South America, the best word that can describe that continent is: stagnation. The two things that South Americans do excel in is in literature and music. In both, they are first rate. In fairness, it must also be said that there are pockets of scientific research, in certain spots of Argentina, Mexico and Brazil. Lastly, the obvious must be pointed out, namely that although the continent embraces stagnation, it doesn’t even come close to the backwardness, the filth and the savagery that is Africa.

All of the above are facts, not opinions. Remember John Adams: “Facts are stubborn things; and whatever may be our wishes, our inclinations, or the dictates of our passions, they cannot alter the state of facts and evidence.” Or, as Will Rogers once said, and was later attributed to Mohammed Ali in yet another instance of cultural appropriation by blacks, “It ain’t bragging if it’s true.”

And in regards to the twin of CRT, the 1619 Project (whose author is an admirer of the repressive Cuban regime just like Bernie Sanders), no, blacks did not create America, nor was America created for the purpose of slavery. That’s just another delusion, similar to the one—also based on hate and jealousy—that Europeans stole astronomy, philosophy, education, science and philosophy from black Africans. “The main players in America’s explosive growth weren’t women, immigrants, Hispanics or Asians, either.” (You would know this if you had paid attention in class.)

So, in view of all of the above, there is every reason why a white person should feel no shame of his race, like the CRT brainwashers are trying to spread. In fact, there is every reason for being a “white supremacist” (depending on the definition of the term). There is also every reason to prevent the Democrats’ effort at importing poverty, filth, corruption, fraudulent elections, and acceptance of dictatorship (which are the values of Africa and South America) through a massive influx of immigrants from those continents. This would be a dilution of values, of the principles that have led to the pinnacle of human existence.

And I am not the only one who has pointed this out.

Armando Simón is a trilingual native of Cuba with degrees in history and psychology, and feelings of déjà vu. He is the author of several books (Very Peculiar Stories, When Evolution Stops, A Cuban from Kansas, and others).