The Rise of Tesla and the
Culture of Corporate America 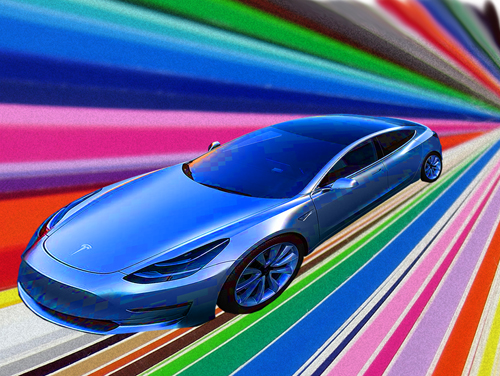 fficiency is the secret god of America. It started with our early Puritan and Quaker settlers, who practiced to perfection all of the same efficiency techniques that are taught to MBAs today. They cut overhead, building simple little chapels instead of prohibitively expensive cathedrals. They disintermediated, advocating a personal direct relationship with divinity rather than one that required investment of numerous man-hours by trained experts. They even streamlined manufacturing, by wearing homogeneous plain clothing without difficult and resource-intensive individual colorations. While studying and serving a Christian God, they were simultaneously laying the path for a nation that would implicitly make devoted sacrifices for the sake of efficiency.

Ever since then, efficiency has won battles we didn’t even realize it was fighting. The European culinary culture of long and meticulously prepared social meals has been vanquished by low-cost high-speed chains where we eat efficiently and alone. We have made architecture plainer, language simpler, and built cities in grids. We have revered entrepreneur inventors like Benjamin Franklin and Henry Ford and Steve Jobs more than our national poets.

Elon Musk is the latest in a long line of America’s revered entrepreneur inventors who have become rich and famous serving the efficiency god. His first big triumph was PayPal, which cut through the inefficient red tape of bank transfers. His company SpaceX has started to dominate the satellite launch industry by reusing rockets. More recently his focus has been on his other company Tesla, and a mass-production factory that he calls an “alien dreadnought” that produces beautiful high-end electric cars.

Mr. Musk has a flair for attention-grabbing stunts, like mass-producing flamethrowers and shooting a convertible into deep space with David Bowie’s “Space Oddity” playing on repeat. These stunts ensure that he’s nearly always being talked about for one reason or another. Another reason for Musk’s popularity is that his recent projects have overwhelmingly coincided with goals that are in vogue with young Americans. A Tesla car is the perfect product for today’s style-conscious young adult who wants to save the planet (because it doesn’t use gasoline) and look good doing it (because it is beautiful and fast and signals wealth). What more could a Millenial want?

Musk’s Tesla has crossed the thin but maximally elusive line between creating good products and creating the defining fashions of the age; Tesla is technically a carmaker but its much more lucrative role is as a tastemaker. As for how it achieved this, plenty of would-be billionaires would like to know. Business gurus like Wharton’s Jonah Berger have spent entire careers trying to pin down what causes the “contagions” of products like Teslas that catch fire and “go viral.” Maybe Musk took Berger’s class when he was at Wharton, or maybe he is personally gifted, or maybe he is lucky, or maybe all three.

For all its power, though, virality is fleeting. It could be that Tesla is just a fad, and that within a few years it will be mostly forgotten. The nature of fashion is that there must always be something new and different to get irrationally excited about. But with each passing day, Tesla’s continuing longevity and growing market capitalization increasingly point towards a long future.

The source of Tesla’s power is not fashion, but rather faith. Consider some of the actions that enthusiastic Tesla fans have taken related to its new “Model 3.” In March 2016, no one in the public had seen or driven the $35,000 car, and its mass-market manufacturing was still years away from even being set up. Nevertheless, when a waiting list opened for it, hundreds camped out overnight in lines worldwide for the chance to pay Tesla $1,000 for a spot on it. Thousands more showed up early in the morning to wait for hours in line and sign a $1,000 check for a chance to wait years more for something they had neither seen nor experienced.

Altogether, 115,000 fans reserved a Model 3 on that first day, and the list of reservation-holders has grown several-fold since—while at the time of writing—only about 10,000 total have been delivered (many with severe manufacturing defects). Some have postponed other car purchases or made special savings goals to be able to afford the car, even though very close substitutes can be obtained without the uncertainty, without the wait, and for comparable prices.

Meanwhile, Tesla has scored last place on some vehicle reliability ratings, gotten last place in a self-driving car competition, and been panned for running record operating deficits and delivering numerous lemons. The insurance is expensive, the service centers and public chargers are few and far between, and the timelines are consistently over-promised and under-delivered. Tesla’s market capitalization is much higher than Ford’s even though the latter delivers many times more vehicles with higher reliability. Amidst all this, the list of reservation-holders continues to grow, the market capitalization is steady and growing, and the faith continues. The devotion to Tesla—despite its apparent failure to justify it—shows that its fans do not possess the temporary fervor that is generated by fashion or the weak fervor of low prices or good products. They burn with the fervor of faith. A popular Reddit post by the user “OptimisticViolence” gives a hint about the perceived justification for this faith:

The same idealism that makes a young adult volunteer for an NGO overseas, or fight for their country, or work crazy hours at TESLA straight out of University, is the desire to make a difference in the world. It’s to affect the course of humanity . . . Charities and NGOs rake in billions a year, but what difference are they really making in humanity’s future over the next 100 or 1,000 years? I can invest my money in TSLA and help support the team that’s going to help create the future I want to live in . . . Tesla, Spacex, OpenAI . . . they aren’t just companies, they are philanthropic endeavours.

It is remarkable that someone can seriously argue for a car company as a more deserving beneficiary of philanthropic donation than a charity. But this is the nature of faith: though it may be buttressed and accompanied by rational argumentation, its essence is irrational and mystical.

The conventional wisdom for some time has been that faith is dying and that atheism and religious “nones” will continue their cultural ascendance. The faith of Tesla fans worldwide provides a powerful challenge to this thesis. It seems to me that faith is like love or sacrifice or anything else that seems unnecessary or unreasonable but nevertheless shows up somehow in every human life. People want to believe something strange and wonderful, they want to be part of something greater than themselves, and they want to give some part of themselves to a cause. If it is not the Nicene creed or the Pentateuch that earns their devoted faith, it may be Das Kapital or the Tesla quarterly earnings report. Even the anti-religious may admit that the latter texts are probably not improvements on the former.

The faith of Tesla fans is a curious combination. It combines the slickness and shallow optimism of Silicon Valley moguls with a vehement environmentalism and nods to fashionable aesthetics as well as the aging, decrepit efficiency god of yesteryear. These elements, together with a commitment to social justice, more or less sum up the things that young Americans are willing to devote themselves to today—or in other words, their faith. America’s future will depend on how this faith is manifested and applied. Let us hope that it can bring us something more worthwhile than over-hyped car companies.