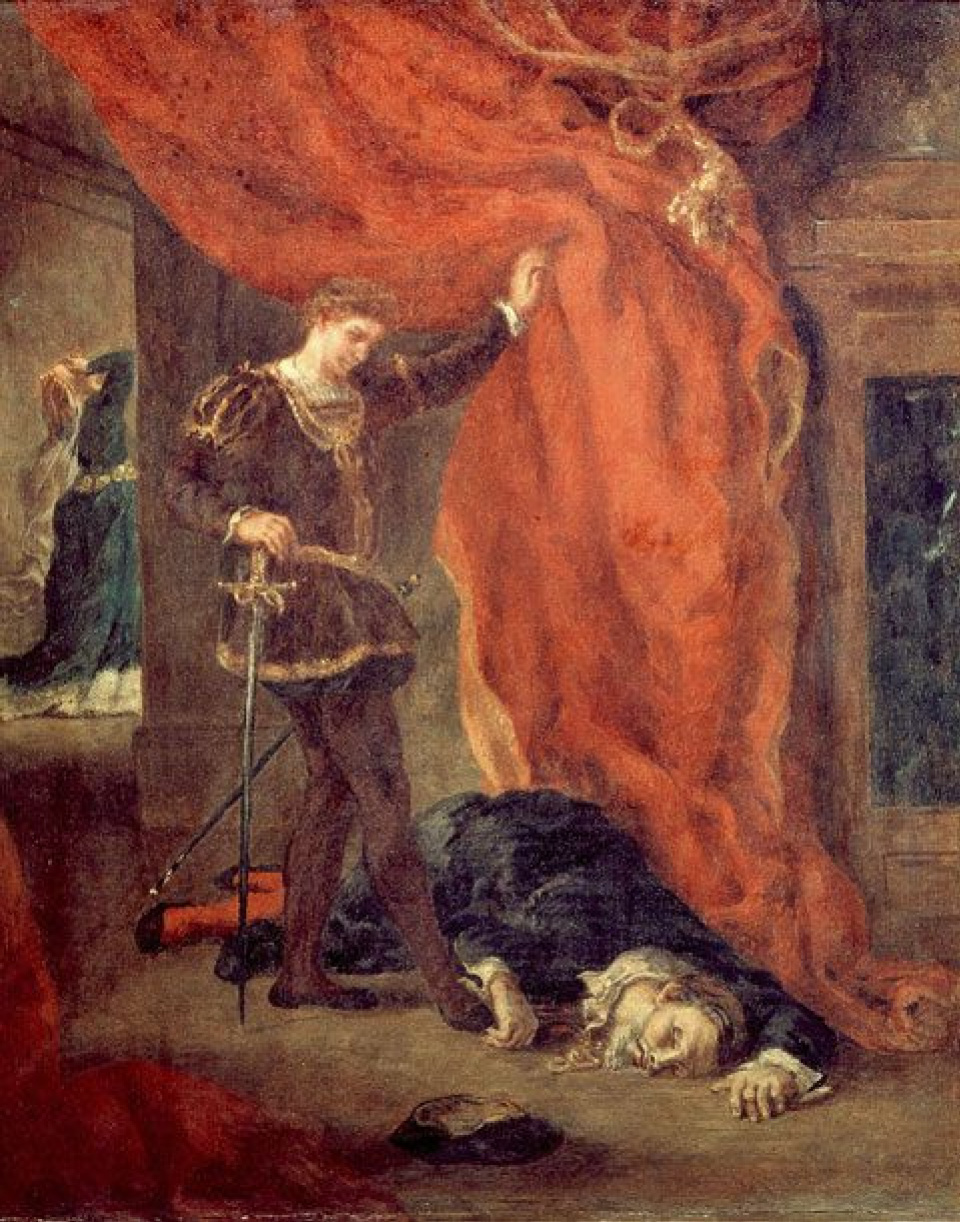 Hamlet before the body of Polonius, Eugène Delacroix, 1855

It used to be thought that there were only six copies of the Second Quarto of Hamlet (the ‘Good’ quarto, 1604) in existence, evenly divided between England and the USA.  In 1959, a seventh copy turned up, in excellent condition, in Warsaw public library, and was then reported to be at the University of Wroclaw. This rare copy was likely bought by a Polish traveller in England who had heard of an important new play with a substantial Polish content. Who could this traveller have been? The obvious candidate is the Polish ambassador, who had arrived in England among other Continental ambassadors to pay their respects to the new King James I. A letter of Arbella Stuart is recorded, in which she says that the Queen had arrived in Hampton Court on the sixteenth [December 1603] and that ‘the King will be here tomorrow. The Polonian Imbassador shall have audience on Thursday next.’ He would have seen the play put on for the court and the distinguished visitors, and probably told one of his entourage to go out and buy the paperback of Hamlet. That is how the Second Quarto started on its long journey to Poland.

The play contains some curious pre-echoes of the 20th century future. Hamlet opens with news of an arms race by Denmark and Norway. ‘Why,’ asks Marcellus, ‘So nightly toils the subject of the land,/And why such daily cast of brazen cannon/And foreign mart for implements of war?’ The diplomatic exchanges of 1.2 and 2.2 turn out to mean peace between Denmark and Norway, and war which the Norwegians plan against Poland. For that, the Norwegian leader Fortinbras needs Danish permission to pass over Danish territory. He gets it from Claudius, and crosses what without straining at history we could call the Polish Corridor. This, in our time, was the narrow strip of land ceded to Poland by the Treaty of Versailles, and claimed by Germany. Its key is Danzig (now ‘Gdansk’), a term which Polonius hints at with ‘Danskers.’  In immediate context, ‘Danskers’ means ‘Danes.’ But a Dansker in Shakespeare’s time was strictly a citizen of Dansk or Danzig (Harold Jenkins). Claudius is content for the Norwegians to do the fighting against the Poles, with Danzig as the ultimate prize. Under different flags, but leading to the Free City of Danzig, it became the story of the 1930s.

That is the clue we have to the objective of Fortinbras’s invasion. Hamlet with tactful skill is able to extract from the Norwegian Captain the strategic aim of the expedition:

‘Goes it against the main of Poland, sir,
Or for some frontier?’

And then the Captain, who has restricted himself to brief, civil responses to an obviously distinguished stranger, fairly lets go:

‘Truly to speak, and with no addition,
We go to gain a little patch of ground
That hath in it no profit but the name.
To pay five ducats–five–I would not farm it.’

The Norwegian is an infantry officer who will lead the assault on the Polish position. His feelings are not hard to guess.

‘Why then, the Polack never will defend it’ says Hamlet. The Captain
answers with a deadly, flat finality that ends the conversation.

‘Yes, it is already garrisoned.’

The Poles will fight. As they did with the garrison stationed at the Westerplatte peninsula, the little patch of ground which defended Danzig for seven days at the opening of WW2. And ended with the Polish commander surrendering to the German commander, who permitted the Pole to keep his ceremonial sword, szabla.

We are left with the question of the connection in Shakespeare’s mind between the role envisaged for Poland and the name of Polonius, the chief counsellor to King Claudius.  It is evident that Shakespeare views the Poles as a warlike and obdurate people, as the late King Hamlet would confirm:

‘So frowned he once, when in an angry parle
He smote the sledded Polacks on the ice.’ (1.1)

Poland is the challenge that Fortinbras takes up, and thus by extension is Hamlet’s challenge. His final soliloquy is a direct acknowedgement of Fortinbras as his model.

‘Witness this army of such mass and charge,
Led by a delicate and tender prince,
Whose spirit, with divine ambition puffed,
Makes mouths at the invisible event…
Oh, from this time forth
My thoughts be bloody or be nothing worth.’

With ‘Polonius,’ ‘Polack,’ ‘Poland,’ and ‘Pole,’ Shakespeare keeps before us the wording of the problem that Hamlet has to solve, which he fails with the blind killing of Polonius, and comes to accept as his duty. Always Poland, in whatever linguistic guise, carries a deep significance in the mind of Hamlet. He enters the last phase of his life with his eyes fully open. All this is set upon a scene of turbulent European politics which we can recognize from our own history. The mysterious clairvoyance of Shakespeare takes him beyond his day to ours, in which the dim shapes of the great play begin to take on clarifications.