The Art of Novelist Elmer Kelton 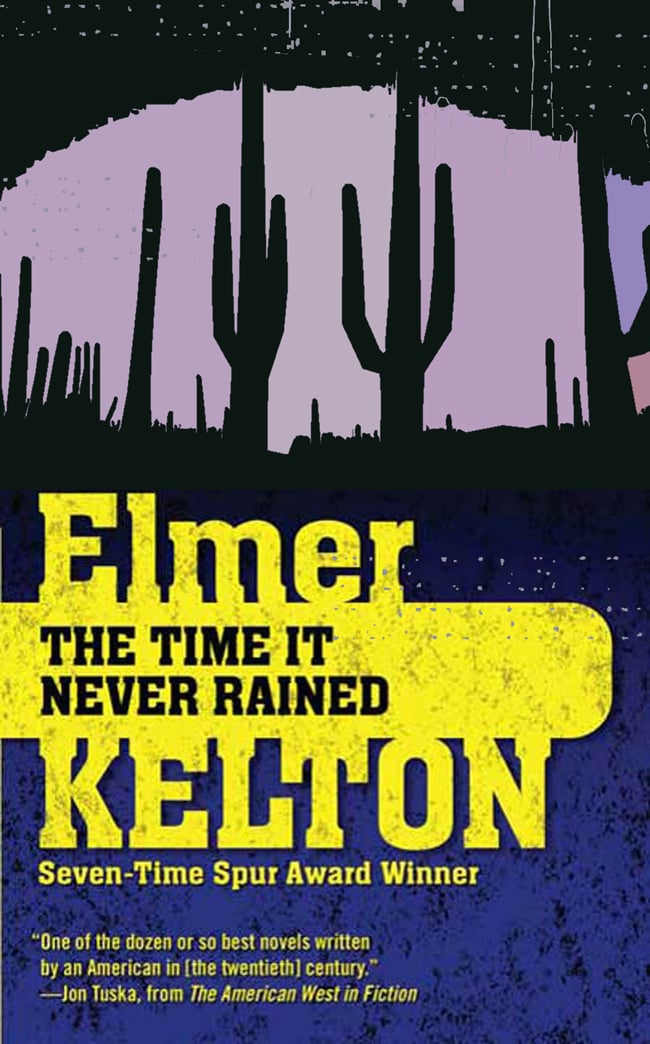 A dry and unforgiving land, West Texas is not a place for long-time city dwellers. West Texas is a land of droughts and wildfires, severe weather events that few people equate with each other. When the rain does come, it comes in excess, drought, the same. Then, there are the fires that torch the land and grass that cattle eat, but which eventually allow for new growth.

West Texas, the town of San Angelo, was Western writer, Elmer Kelton’s (1926-2009) home. Kelton served in the US Army, seeing combat during WWII. Kelton’s first novel was Hot Iron, published in 1956. His last two were Other Men’s Horses and Texas Standoff. Kelton is best known for his acclaimed novels The Time it Never Rained (1973) and The Day the Cowboys Quit (1971). The Good Old Boys (1978) was made into a film in 1995 starring Tommy Lee Jones.

Kelton wrote 62 fiction and non-fiction books, winning many literary awards, including the Silver Spur seven times. Before becoming a full-time novelist, Kelton was the farm and ranch Editor of The San Angelo Standard-Times from 1948 to 1963. He was also Editor of Livestock Weekly.

Reading Kelton’s novels, we quickly become aware that his storylines and themes point to universal concerns that he explores in the guise of Western situations and settings. That is, Kelton is a writer who specializes in the American West, and the problems associated with life for hearty people who take their well being and survival into their own hands. Kelton’s novels present readers with a laboratory of ‘case-studies’ of the human condition that transcend the Western novel.

While there is a vast expanse of Western writers and themes that, taken together, make Westerns one of the most fertile literary genres, Kelton mostly focuses on the interaction of people with each other, and the land, always allowing for the irony that, regardless of our best judgement and well-conceived plans – the best-laid plans of… – often come to naught. The upside of this realism is that the failure to plan always results in unmanageable circumstances and heartbreak, if not tragedy.

Irony always has man in its crosshairs. This is a time-proven truism that the best literary works of the Western Canon aptly showcase. All that conscientious readers need to do is pay close attention. The best way to know this is to take note of the force of irony in the trajectory of individual lives. Literature is a breeding ground for this.

The Time it Never Rained

The storyline of The Time it Never Rained is about one of the longest and deadliest droughts in Texas history: the 1949-1957 drought. This was a devastating event in Texas history that decimated the number of farms and ranches in the region.

Kelton’s iconic character, Charlie Flagg, in The Time it Never Rained is a stalwart rancher who battles the biblical-like, seven-year drought with courage, his wisdom leading him to make decisions that are not satisfied with taking short cuts.

As the drought intensifies, Flagg, the proud Texas rancher, trains his soul not to accept defeat. He handles contingencies appropriately with understanding and his strong will. For Flagg, contingencies are tests that man must undergo and surpass. Flagg does not believe that man came into this world to be happy. This is one reason why the northeastern literati, a clique of people who embrace and are fueled by the culture of critique, find fault with Flagg. Another reason is that the staunchly stubborn Flagg does not accept government subsidies and handouts. Why not?  Because he does not want to make his circumstances worse by having to become a pawn of government bureaucrats. That is a rare man, indeed.

Like Louis L’Amour, Jack Schaefer and other Western writers, Elmer Kelton has a loyal readership. These are readers who appreciate a 30,000-foot view of human life, as it were. Readers of Westerns can be called nostalgic, if by this we mean that these readers accept the passage of time as a necessary condition of life.  Unlike other genres, which place much hope in the future, science fiction being an example, Western literature takes the passage of time and qualifies it. That is, time, place, and human circumstances are put in proper perspective.

Critics of Western Literature and the Culture of Critique

Western writers irk academic critics. Contrast this with the large readership of Western novels throughout the world. The denizens of the culture of critique are mostly city-dwellers and self-aggrandizing lackeys of each other, the literary version of competing with the Joneses. Armed with an extra-literary script of everything and anything political that has nothing to do with literature, the disingenuous idealogues that pose as critics have a beef—excuse the pun—with literature of ranchers, farmers, country people and the demanding life of people who embrace the road less travelled.

Why do academic critics—who don’t read the books they review—take offense with characters like Charlie Flagg?  Perhaps these characters create a mirror-effect that exposes the banal and empty lives of many critics. What do these myopic folk think of the Western genre?  Kelton can best explain: “The Western field is a literary ghetto. Critics don’t read a Western unless the book is contemptuous of its subject matter. If you write out of love for your subject matter, they’ll dismiss you.” Apparently, Kelton was a patient and kind man who embraced prudence more than his critics.

The Time it Never Rained is a philosophical work that brings stoicism to the lives of people affected by the long drought. What is a stoic, if not one who takes the dynamic contingencies of life with a philosophical grain of salt, a reflective whiff of, “If not now, then when?”

While his neighbors accept government aid in the form of money and hay, Flagg does not: “If you get to dependin’ on the government, the day’ll come when the damn federales will dictate everything you do. Some desk clerk in Washington will decide where you live and where you work and what color toilet paper you wipe yourself with. And you’ll be scared to say anything because they might cut you off the tit.”

Flagg remains steadfast in his beliefs and convictions. The tenable solutions to his problems, he harnesses within himself. He lives by the motto: “I’m not sayin’ any man is wrong because he doesn’t’ pattern himself after me; what anybody else wants to do is his business, not mine. I just want to live by my own light and be left the hell alone.”

The Day the Cowboys Quit

This novel is about a strike. Cowboys who work for ranchers decide that they deserve better pay; some believe they should be allowed to become free-lance ranchers and be allowed to graze cattle on their employer’s land. The novel takes its inspiration from a dispute between ranchers and cowboys in 1883, when cowboys on the Canadian river region of Texas created a strike that ultimately failed.

Kelton does not pin ranchers and cowboys against each other. Instead, he takes a measured approach to the problems of the ‘closing-in’ of the land, where ranchers once allowed their cattle to roam. Kelton does a conscientious job of giving both sides ample justification for the decisions they make.

The Day the Cowboys Quit takes form around the perennial problem of good and evil, and how people often rationalize their behavior. Kelton’s novels focus on human nature and how this responds to changing times. Some of his characters become oppressed by their circumstances, while others let their convictions guide them through difficult moments.

The land unites ranchers and cowboys: “Some people would never understand the hold this land could take on a man if he stayed rooted long enough in one spot to develop a communion with the grass-blanketed earth, to begin to feel and fall in with the rhythms of the changing seasons. There was a pulse in this land, like the pulse in a man, though most people never paused long enough to sense it.”

While the land is subjected to the effects of time and climate, the people who live on it must deal with changes, often tragic. Kelton’s characters must learn to salvage aspects of their circumstances, if they are to survive.

Kelton was a rugged realist who understood that dissolution is part of the normal process of human life. No doubt, that is a stoic attitude that is not common today, a dysfunctional time of mass psychosis and moral delirium.

There is a connection between Charlie Flagg’s neighbors, who cave in and accept government handouts in The Time It Never Rained and the few weak-willed and cowardly characters in The Day the Cowboys Quit, with sheepish people who approve forced ‘vaccine’ mandates, glaring election fraud, and virulent presidential ‘executive orders’ that undermine democracy and the will of the people.

PrevThe Greeks and I
Hamlet’s PolandNext