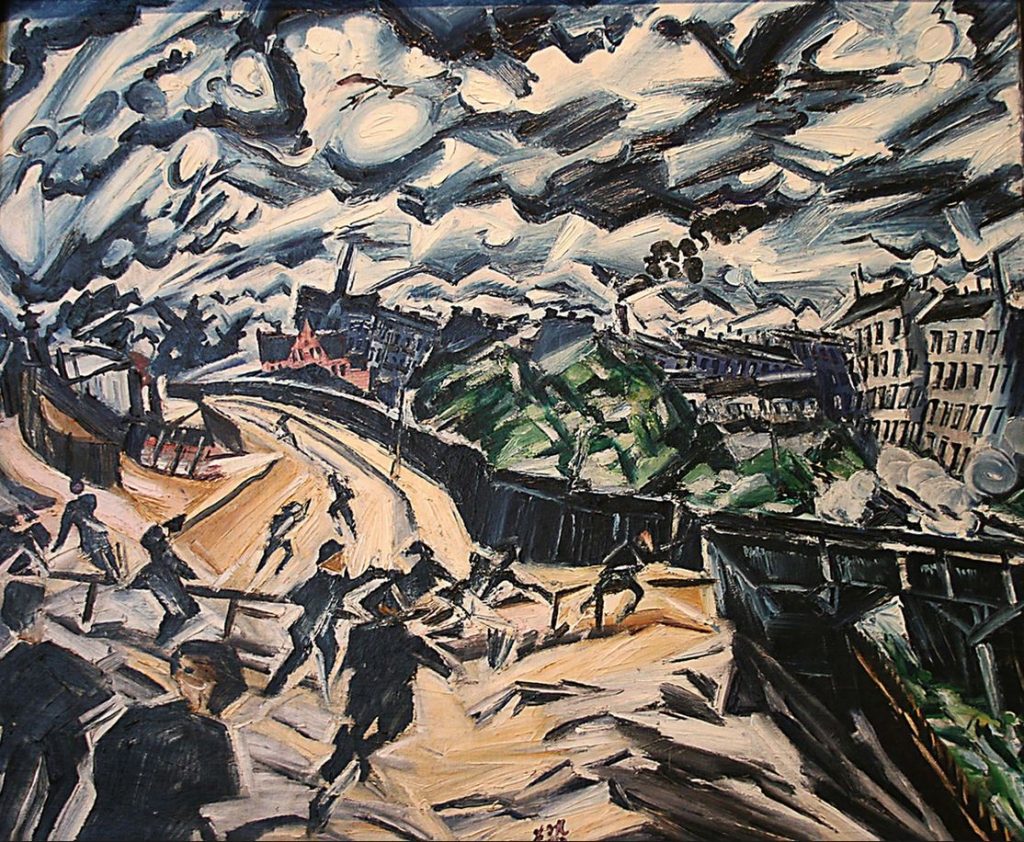 These are sombre times for the British Empire. It has not been allowed to rest in peace; its unquiet grave is now subject to continuous revisiting. Schools are urged to study slavery and colonialism, and partake of deep penitence for what used to be a Good Thing. ‘Rhodes Must Fall’ is the movement, one of whose leading spirits came out of Africa on a Rhodes scholarship, to pull down the statue of Rhodes in Oriel College, Oxford. The statue still stands, strenuously defended by Oriel. In Bristol, paintings of slavery-enriched notables have come under fire. The Lord Mayor of Bristol, who hales from Jamaica, said that the portrait of Edward Colston in the Mayor’s Parlour made her feel uncomfortable, so it was hurried into storage and Colston’s statue was hurled into the harbour. Nothing like this has been seen in England since the Puritan iconoclasm of the 1640s, when images and ornaments in churches were destroyed. We are enjoined to feel guilty about African colonies, but it is pointless to scold empires for behaving imperially—it is what they do. I do not join this playground of the Left, especially its juveniles, but I’ll deal with a single aspect of the past: the affectionate regard for empires in popular culture, which ended in the mid-sixties.

Sanders of the River was a successful film of 1935. It celebrates a hero figure of the colonial era, the District Commissioner who rules over a vast area of Nigeria with just a company of Houssas under a British officer to keep order over the native tribes. Sanders featured in a series of stories (1911-1922) by the prolific Edgar Wallace, all of which are immensely readable, for Wallace knew his Congo and imparted deep understanding to his fictions. The protagonists are Sanders (’Lord Sandi’, to the Africans) and Bosambo, the cleverist of the natives. Between the two order is maintained. Sanders, iron-grey, nearing 40 and without illusions, makes Bosambo Chief of the Ochori. He rules from his base the paddle-steamer Zaire, in which he travels up and down the great river. Law is administered if necessary from the troops at his command, and the Maxim gun (‘the gun that says “Ha-ha-ha”’). That is Sanders’ justice, and it is always seen as just. There was another side, and it was put by Hilaire Belloc:

‘Whatever happens, we have got
The Maxim gun, and they have not.’

There are times when order cannot be kept any other way, as every colonial power could confirm. And post-colonial, come to that.

The film registered a romantic and positive view of colonial rule. The power of civilization was seen as governing the darkness of Africa. But the future was already visible in 1935, for Paul Robeson, the star who played Bosambo, was completely dissatisfied with his part. He felt that the message had changed in the cutting room, and the leader had become a lackey of the colonial rulers. He had no intention of supporting the myth of ‘The White Man’s Burden.’ He might however have been more appreciative of their rule had he lived to 2014, when the militant Islamic group Boko Haram in North-East Nigeria kidnapped 276 young women and held them and others for some years. The Federal Government in Lagos could do nothing; Lugard would have wired the District Commissioner, and a company of Houssas would have done the rest. Eventually some 200 of the captive girls were released, though hardly—I put this delicately—in mint condition. The White Man’s burden had shifted to black shoulders. It was the same burden.

The Sanders stories show the positive side of the imperial mission. The last story in The People of the River gives the human side of the lonely District Commissioner. Sanders wonders if he stands a chance with the attractive female medical missionary, stationed some way down the River. But then she tells him that she is now engaged to her boyfriend in England. And then Sanders comes to the Ochori and finds Bosambo in deep mourning for the death of his first-born son. “‘God be with you, Bosambo my brother’ said Sanders gently, and laid his hand on the black man’s heaving shoulder; ‘these things are ordained from the beginning of time.’ ‘It is written,’ whispered Bosambo, between his sobs, and caught his lord’s hand.” Not much colonial arrogance there. The last line in the story is Sanders’, after he had torn up the unsent letter to the medical missionary: “‘Thank God I’m not married,’ he said, and went to sleep.”

For imperial glamour, the French were unsurpassed. Under the Resident- General of Morocco, Marshal Lyautey, France extended its control over North Africa, through such famous regiments as the Chasseurs d’Afrique and the Zouaves. Above all, the French Foreign Legion based in Algeria inspired many tales and films, until De Gaulle, whose rule had been threatened by their part in the Generals’ revolt (1961), cut their numbers from 40,000 to 8,000. They

were relocated from Sidi-bel-Abbès to Metropolitan France, and are still to be seen in the Quatorze Juillet parade down the Champs Elysées, led by the heavily bearded pioneers (sapeurs) with buffalo leather aprons and axes. The peak of their fame was reached in the best-selling novel Beau Geste (1924) by P.C. Wren, who had not been a legionnaire but was well informed about life in the Foreign Legion. The climax of the story is the legion’s defence of the desert outpost Fort Zinderneuf, assailed by a large force of Tuaregs. As legionnaire after legionnaire is killed, the dead are propped up by a bayonet against the parapet, so that the Fort seems to be defended against the hordes. The archetypal image of the Fort is of the multi-national European force fighting off the attacks of savages, the distant ancestor of today’s ‘Fortress Europe’. And this image was highly popular: Beau Geste was made into a number of films and TV versions from 1926 on, with Ronald Colman and later Gary Cooper starring as the eponymous hero. P.C. Wren lived well till the end of his days on the Foreign Legion stories he turned out.

Spain also has its place in the annals of North African warfare. The Rif war, in which Spain sought to pacify Morocco, saw the rise of Francisco Franco. As a young lieutenant, later a major, the future general served in the Rif war. Somewhat surprisingly in view of Franco’s later reputation for caution, he made his name as an audacious leader, and was shot through the abdomen by machine-gun fire. For this feat he was awarded the Cruz de Maria Cristina. An echo of Franco’s time in Morocco is the enclave of Melilla, saved from the Rifs by a three-day forced march by the Spanish Foreign Legion led by Franco. The enclave is newsworthy to this day, being besieged by hordes of Moroccans storming the double 6-metre high fence in their attempt to get to Europe. Spain will not give up Melilla, Franco’s legacy, or its other enclave Ceuta, the last of the European outposts in Africa. The Rif war has taken on a different complexion but remains a historic presence.

In all this the romantic appeal of soldiers and administrators never lost its grip on the Western mind. Hollywood was perfectly happy with the British and French empires (Gunga Din, The Lives of a Bengal Lancer, Hitler’s favourite film). There was even a successful operetta, Sigmund Romberg’s The Desert

Song (1926), which ran for 465 performances on Broadway before moving to London. But the main plot, based on Moroccan freedom fighters revolting against French colonial rule, is out of key with later developments. There has not been a Broadway revival since 1973.

Not till the wave of decolonization started in the 1950s and 1960s did imperial glamour become a closed-off era of Western culture, ended by the culture wars of our time. The inflection point was Gillo Pontecorvo’s The Battle of Algiers (1966), which retained the battle thrill in the opening sequence, with Ennio Morricone’s percussive soundtrack as the paras debouch from their transport and swarm over the Casbah. The soundtrack has echoes of Shane, as Alan Ladd rides out to duel with Jack Palance. Shot in black-and-white, The Battle of Algiers has a documentary, newsreel-photography feeling. Pontecorvo’s actors are non-professional, save for Jean Mathieu, and its sense of total authenticity takes it out of the genre of imperial glamour I’ve been discussing here. This, one feels, is history itself, and that has been its verdict, however slanted the viewpoint. Since the film was commissioned by the Algerian Government, that is hardly surprising.

The Battle of Algiers came soon after the old genre had produced its final masterpiece: Zulu (1964). The Zulu people had long been memorialized in Rider Haggard’s Alan Quatermain stories: Quatermain’s comrade was the Zulu Chief Umslopogaas, with his terrible axe Inkosi-Kaas which killed innumerable adversaries. The film, directed by the American Cy Endfield, celebrates the defence of Rorke’s Drift. A British force of 1300 had just been wiped out by the Zulus at Isandlwana, and the victors moved on next day to the isolated mission station at Rorke’s Drift. Here some 150 defenders held their position against 3-4,000 Zulus armed mainly with assegais. Their heroic defence earned 11 Victoria Crosses, and captured the imagination of the nation. In the film the part of Cetshwayo was played by his great-grandson, Chief Mangosuthu Buthelezi, a friend of Margaret Thatcher who attended her funeral in St Paul’s. He has always maintained that there was nothing racist about Zulu. The warrior qualities of the Zulu people are fully acknowledged, and are presented with due admiration, as they are to this day by the British. A haunting scene in the final stages of the battle has the Welsh singing ‘Men of Harlech’, while the

Zulus respond in their own song. In 2008 Chief Buthelezi visited the barracks of the Welsh Regiment in Brecon, which commemorates the soldiers who fought in the Anglo-Zulu War. The visit had been ‘emotional’ for the Chief, who added that ‘his people treasured the link they had with Wales.’ He was shown Zulu spears, clubs, necklaces taken as trophies from the battlefields, and spoke of ‘the mutual respect and comradeship grown out of the war.’ It is an enduring tradition, and Zulu is a perennial favourite on UK TV. The film ends with Disraeli’s lines, spoken by Richard Burton: ‘Who are these Zulus, who are these remarkable people who defeat our generals, convert our bishops, and this day have brought to an end a great dynasty?’ (The Prince Imperial, who volunteered for service in South Africa, had been cut off and speared to death.) Let Disraeli’s tribute be the fitting end to the last of the great films celebrating the heroic exploits of the West’s colonial era.

PrevThe Scorpion and the Crab
My Children Have Defeated MeNext